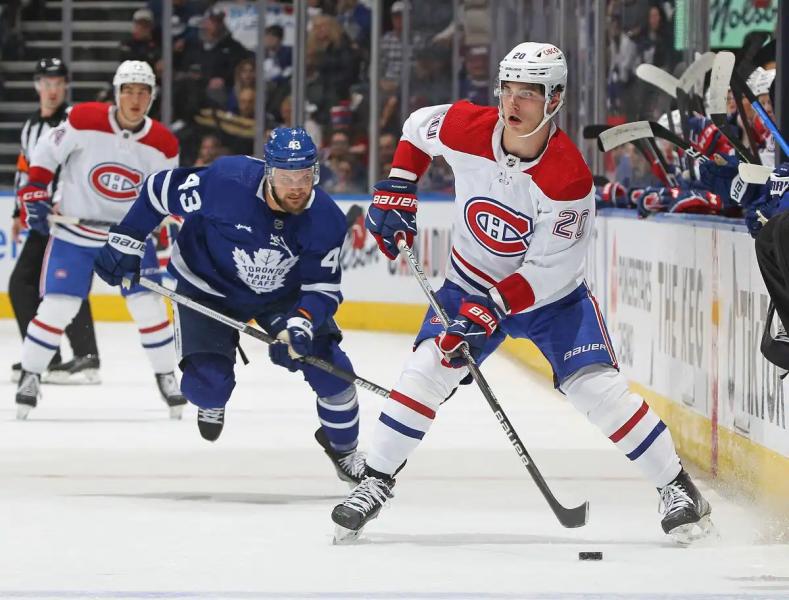 TORONTO | We have already experienced more exciting evenings in the Queen City for a confrontation between the Canadiens and the Maple Leafs.

No, this preparatory match between the two great rivals, won 3 to 0 by the locals, will not go down in history. It must be said that on both sides, we had left the big guns at home.

With the exception of William Nylander, fans inside Scotiabank Arena probably used the two teams' roster sheets more often than usual to see who was skating in front of them.

Obviously, most of them were curious to see Juraj Slafkovsky at work. For a second game in a row, the first pick in the last draft didn't look bad. Without being exceptional, he applied himself in the small details.

Along with Joel Armia and Rem Pitlick, he formed the most consistent unit in the Montreal camp. In the second half, the Slovak's corner work created a great scoring opportunity for Armia.

Stephens steps out of the shadows

If we often look at the youngsters who are in the fight for a position with the big club, we forget that some support players try to command attention in the hope of receiving a call in case injury.

Mitchell Stephens has certainly scored points with management. He showed great aggression in opposing territory, causing a few turnovers. Martin St-Louis also used him often on the penalty kill, a situation in which he did well.

Acquired on the free agent market during the summer, the 25-year-old Ontarian displays 72 games of experience on the Bettman circuit.

Jonathan Drouin was to take part in the meeting. Ill, the veteran stayed at home, declaring at the same time forfeited. Juraj Slafkovsky took his place in the formation.

A DUO OF QUEBECERS

Samuel Montembeault and Kevin Poulin shared the work in front of the Canadian net. Foiled by Nicholas Robertson, Montembeault yielded once on 15 shots. For his part, Poulin allowed two goals on 14 shots. Denis Malgin and Nicholas Abruzzese deceived his vigilance.

50 YEARS AGO, THE GOLDEN GOAL

Before the game, the Maples organization Leafs paid tribute to the Canadian team which, 50 years ago, won the Series of the Century against the Soviets. Some former players were there, including Serge Savard, Yvan Cournoyer, Ken Dryden, Peter Mahovlich, Frank Mahovlich and Paul Henderson. At each of the commercial breaks, we also made sure to bring to life for the spectators present a summary of each of the eight matches of this famous confrontation.

At the end of the morning, the Canadian announced that it had put an end to the amateur tryout of goalkeeper Riley Mercer. The 18-year-old athlete will report to the Drummondville Voltigeurs, with whom he will begin his second season in the Quebec Major Junior Hockey League.

+ Filip MesarNobody stood out, but the streak in which Mesar beats two Leafs players to create a great scoring opportunity is worth mentioning – Corey SchuenemanThe defender also struggles to start the season in Montreal Yesterday he did nothing made in this sense It seemed to go fast for him He often had his feet in the cement against the Maple Leafs: a match without flavor ” />