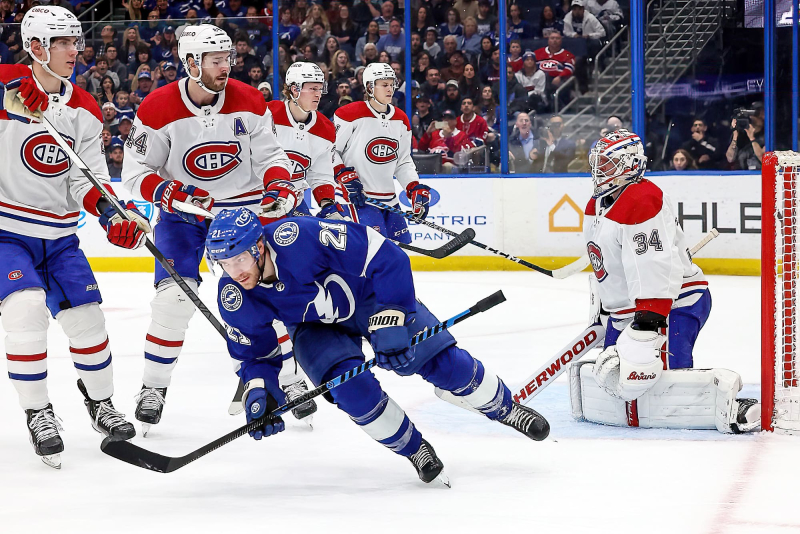 TAMPA | The Canadian wrote a page in its rich history with five rookie defenders in uniform in the same game. But we will not remember this date of December 28, 2022 as a highlight of the franchise.

There was no miracle. With Joel Edmundson as the only veteran on the blue line, the CH went bear hunting with a butter knife to recycle the expression of the late Pat Burns.

The Lightning, winner of the Stanley Cup in 2020 and 2021 and lost finalist last year, signed a logical 4-1 victory over the Habs on Wednesday at Amalie Arena.

“We don't want to use our youth as an excuse or a crutch, we knew our formation before the game, said defender Johnathan Kovacevic. We would have liked to experience this match in a winning scenario.

Jake Allen avoided an even higher final score by making many key saves. Kaiden Guhle, a rookie, scored the visitors' only goal late in the third period.

With the recall of Justin Barron from the Laval Rocket and the withdrawal of Chris Wideman from the training, Martin St-Louis had trusted five rookie defensemen for this meeting. Kaiden Guhle, Jordan Harris, Arber Xhekaj and Johnathan Kovacevic were the other four youngsters.

If the CH hadn't never had a game with five rookie fullbacks on his roster prior to his visit to Tampa, it was not a first at the NHL level.

According to research by NHL statisticians, we had to go back fifteen years to find a similar case.

The Philadelphia Flyers used five rookie defensemen on April 5, 2007 in a 3-2 loss against the New Jersey Devils. That night, Derian Hatcher felt a bit alone in the world with rookies Braydon Coburn, Alexandre Picard, Lasse Kukkonen, Nate Guenin and Ryan Parent by his side.

Like the Habs this season, the Flyers found themselves in a reconstruction phase during the 2006-2007 season. They finished 30th and last in the NHL.

Brayden Point has nimble and quick hands. It's not a secret. In the second period, the Lightning center found a way to weave its way between Kaiden Guhle, Joel Edmundson, Christian Dvorak and Juraj Slafkovsky and then escaped past Jake Allen. He finished his magic trick by easily outmaneuvering Allen. It was great art. But it was also terrible defensive cover.

Martin St-Louis and Alex Burrows again bet on a first unit on the power play with five forwards with Nick Suzuki, Cole Caufield, Dvorak, Jonathan Drouin and Kirby Dach. But once again, the Habs had nothing threatening on the power play with a record of zero in five. Unlike the visitors, the Lightning had two real quarterbacks on the blue line with Victor Hedman and Mikhail Sergachev. Hedman skated with the first unit, while Sergachev found himself on the second.

ARMIA IN THE FIRST TRIO

Suzuki reconnected with Caufield on his left flank, but there was still an intruder on the right wing. Like the game against the Stars in Dallas, Joel Armiareceived another audition with Suzuki. Despite this vote of confidence from the head coach, the Finn extended his goalless black streak this season to 24 games.

With David Savard and Mike Matheson currently on the injured list and the absence from Edmundson at the start of the season, CH have now played 27 of their 35 games with four or more rookie defenders on their roster. Before this season, the Habs hadn't counted on four inexperienced defensemen in a single game since April 9, 2016 with Darren Dietz, Greg Pateryn, Joel Hanley and Ryan Johnston.

+ Kaiden GuhleGuhle deserves another powerplay audition He beat Andrei Vasilevskiy late in the game, but he mostly attempted seven shots in his direction, three of which hit the target – Christian DvorakDvorak obtained an assist on the only goal of the game, that of Guhle, but he fumbled during several defensive covers He forgot Alex Killorn in front of the net on the hosts' first goal and he played softly during the sublime play from Brayden Point, where he netted his second goal of the meeting