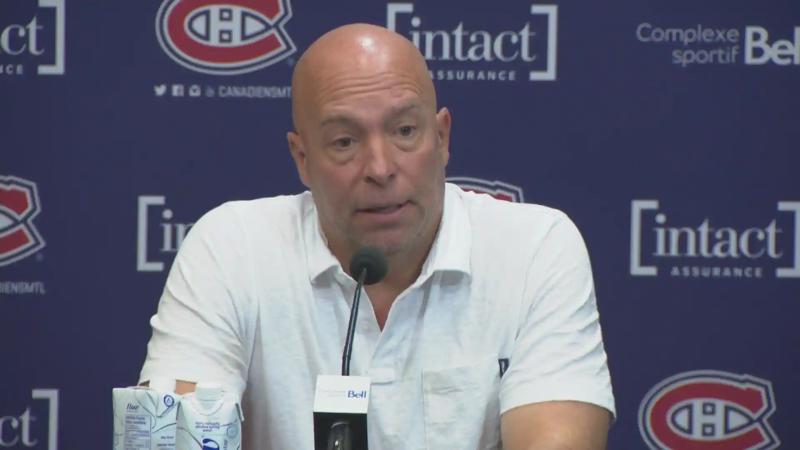 Kent Hughes remains a rookie as general manager, but he has a ton of experience when it comes to the player agent business. In his old life, he didn't shout from the rooftops about his strategies for negotiating the contracts of Vincent Lecavalier, Kristopher Letang or Patrice Bergeron.

As CEO, Hughes chose a similar tactic three days before the NHL Draft, where the Canadiens will speak first overall for the first time since 1980.

The 52-year-old kept all options open, such as trading the initial selection, acquiring another top-3 pick or improving his fortunes with his second right to speak (26th). ;in total) in the first round.

The general manager of the Canadiens, Kent Hughes, and his special advisor for hockey operations, Vincent Lecavalier, were all smiles during a press conference on Monday in Brossard.

On the identity of the future class leader on Thursday, Hughes simply confirmed what had been suspected for several weeks. There are three candidates with Shane Wright, Juraj Slafkovsky and Logan Cooley.

“Yes, it's played between the three forwards,” Hughes told reporters on Monday.< /p>

“We really want to assess players, we want to predict a player's future,” he explained. The question is how far a player could go. We have to look at where he is now and where he can go in his NHL career. We don't want to determine who is the best player at 18, but who will be the best player at 22, 23 or 24. We have to determine who can help us on a long road and who will make us a better team for several seasons.

Seated to the right of Hughes, his former agent, Vincent Lecavalier also answered the media inquiries. In 1998, the Quebecer had the good fortune of becoming the Tampa Bay Lightning's first overall pick.

24 years ago, Lecavalier wore the colors of the Rimouski Oceanic and he dreamed of a long career in the NHL.

Lecavalier and the pressure

Now a special advisor to hockey operations with the CH, the 42-year-old man shared his experience with Wright, who has been under the spotlight for a long time with the Kingston Frontenacs.

“It's not easy, you have pressure every night,” recalled the former centre-back. You're just 17, not 25 or 30 with 10 years of experience. In my last season in Rimouski, I had a lot of ups and downs, especially mentally. Everyone talks to you about it, you can't get away with it.

“I learned a lot about him [Wright], he's a good person,” said added Lecavalier.

The possibility of having trades is there

Despite the presentation of the draft at the Bell Centre, Kent Hughes did not an X on the possibility of exchanging the first choice.

“ I am aware that it would not be the most popular decision, admitted the general manager of the Canadian. But if the draft took place tonight [Monday], we would draft a player. My responsibility is to work for the good of CH in the future. We'll look at the options.

“The odds are better of advancing with our second pick in the first round [26th] than trading our first pick overall,” said clarified the DG a few minutes later.

If Marc Bergevin had the mentality of getting as many darts as possible in a draft, Hughes should logically prioritize quality over quantity.

While there are still debates among recruiters, Hughes ended up admitting on Monday that he had a preference for one of the three&nbsp ;tenors.

On the 22nd question with a similar angle, he flinched a bit.

“We will all be together with the recruiters on Monday evening [Monday] for the first time. I have a certain preference. But I want to hear from everyone. I don't have all the answers in the world. I want to listen to everyone. ”

The Canadiens will have to decide between three players who have known realities well different.

Shane Wright was the captain of the Kingston Frontenacs in the Ontario Junior League, Logan Cooley played with the United States under-18 program, while Juraj Slafkovsky spent the last season skating against men with the TPS of Turku in Finland and with the team of Slovakia at the Olympic Games and the World Championship.

“ You have to look at projections and think what they will become. Not in 2023, but in three or five years, mentioned Vincent Lecavalier, special adviser to hockey operations at the Canadian. We're talking about three different players, but three good players. »