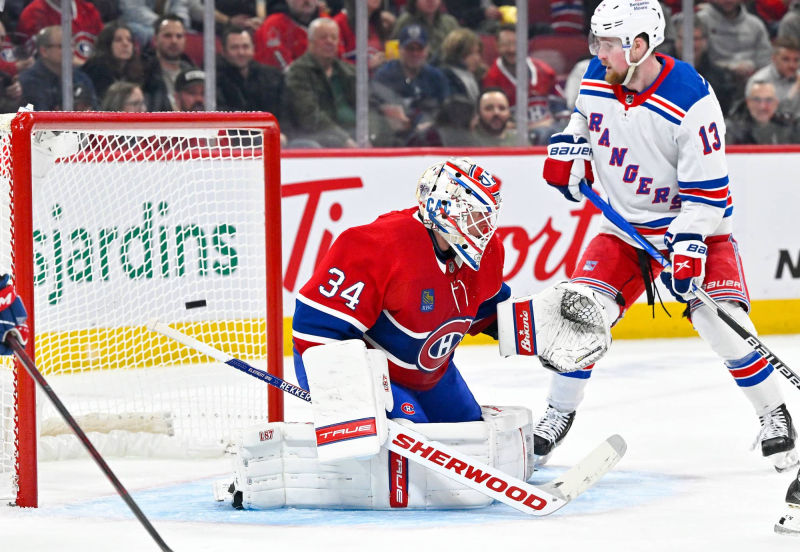 “I have to be better, everyone has to be better. Martin St-Louis expressed the wish just hours before his former team, the New York Rangers, visited.

But wishes often sound like New Year's resolutions Despite all the will in the world, they don't often materialize.

The Canadiens extended their black spell by suffering a 4-1 loss to the Blue Shirts. Coming home and sleeping with your head on the right pillow will not have been enough.

With this setback against Artemi Panarin and Mika Zibanejad, the CH have now lost their last seven games (0-6-1) and signed only one victory in their last eleven games (1-9-1).

To use the words of St-Louis, once again during his morning conference, the team has never fallen so much in eleven months under his leadership. If the fall remains vertiginous, we could see it coming on the horizon. Kent Hughes and Jeff Gorton have chosen the long road of reconstruction and this road has its share of obstacles.

There are not only negatives to take from this game. Unlike visits to Sunrise (7 goals), Washington (9 goals) and Nashville (6 goals), the Canadiens turned off the nets spigot by the ton.

“It was a step in the right direction, we probably played ten times better than our last road games,” center Jake Evans said. We were stronger in our territory. We will now have to generate more offense. “

” I was happy with our first, we attacked things that we had talked about a lot, like our defensive game, added St-Louis. It was a big improvement.

Jake Allen did not receive a bombardment of shots, another positive aspect. The New Brunswick native, however, escaped this meeting by giving up two goals in 59 seconds in the second period.

“I liked our game, we played with more intensity, our execution was perfect.

it better and our passes too, noted Allen. A setback is still a setback, but the effort was better. We will not hide, we are going through a low period. »

In the category of rare events, we also note the first goal of the season for Joel Armia in his 27th game. In the third period, Armia got a reward for the good work of his line by beating Jaroslav Halak.

Jake Evans, Evgenii Dadonov and Armia were the three most threatening forwards for the hosts. When your attack rests on the shoulders of your fourth line, you rarely come out on top.

A victory for Halak

In the Rangers camp , Filip Chytil led the attack with two goals, including one in an empty net.

Halak recorded his fourth victory of the season, but also his seventh in twelve games against his former training.

A WINNER IN THE IMAGE OF THE MONTH

There wasn't a huge ovation for the December Molson Cup winner. Jake Allen won the trophy despite a difficult month. The New Brunswick native went 3-7-1 with a 3.45 GAA and .899 save percentage. When your MVP is a masked man with an average above 3.00 and a rate below .900, that's a fair illustration of a tough month.

Nick Suzuki will be participating in the All-Star Game for the second year in a row. After Vegas last year, Suzuki will reunite under Florida palm trees at Sunrise for this annual event. The captain was therefore preferred to his great accomplice, Cole Caufield.

The CH had tightened its game for the visit of the Rangers. But the locals had also forgotten the importance of attacking. Jaroslav Halak waited almost 17 minutes before receiving a first shot, the work of Evgenii Dadonov. In the first period, Rangers slightly outshot 6-4.

St-Louis and Burrows had opted for a return to a strategy of four forwards and one defender on the power play. Chris Wideman was on the first wave and Arber Xhekaj on the second. Chris Kreider, who remains a speed bomb, took advantage of a bad pass from Juraj Slafkovsky towards Xhekaj to score shorthanded. It was the first time this season that the Canadian gave a goal with the advantage of a player.

+ Joel ArmiaArmia scored his first goal of the season He found ways to threaten Halak with five shots, three of which hit the Rangers keeper He spoke of immense relief when he spoke of his first goal of the season – Christian DvorakNick Suzuki had another quiet night offensively but will need help Still in the second center chair, Dvorak remained unseen along with Juraj Slafkovsky and Josh Anderson Of the three, only Anderson fired shots (3) on Halak < p>