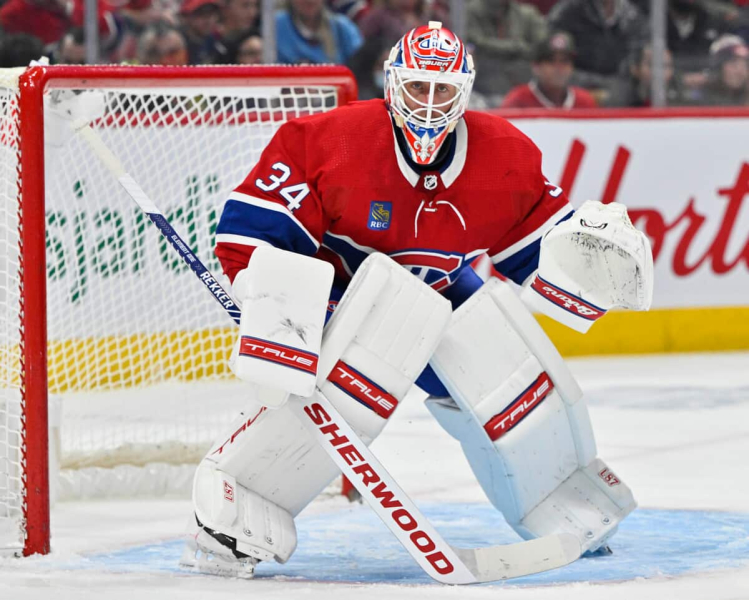 Dog who goes hunting loses his place. Returning dog takes back his property. With the imminent return of Jake Allen, it will be interesting to see if Martin St-Louis adopts the expression in its entirety or only in part.

Injured to the upper body, Allen missed the team's last eight games. Eight meetings during which Samuel Montembeault took the opportunity to hatch. Of these eight starts, seven were of great quality.

His .930 save percentage over that stretch was part of the reason he enjoyed four wins and why the Habs held off the Bruins late into Tuesday night's game.

“I'm happy for Sam. He's a good goalkeeper. I saw it when he arrived last year. I'm glad he got the chance to open people's eyes,” Allen said after Wednesday's optional practice at noon.

“In addition, he is a Quebecer in Montreal. So it's even bigger, he added. Its potential is enormous. I hope to see him finish the season strong and see him continue to improve. »

It's all well and good, but such an outfit did not fail to bring back to the carpet the famous question about the identity of guardian number one.

“No labeling,” Allen insisted. Besides, there is no competition between us. What matters is the good of the team. Sam got stoned in the last few games. With all the injuries in the squad, it wasn't easy. It gave the group confidence.

That said, Allen acknowledges that at another time in his career, he might have spoken differently. However, at 32, with a Stanley Cup ring in his pocket and a contract extension that will bring him $3.85 million in each of the next two seasons, the New Brunswicker is no longer in the same state of mind. .

In fact, he has wonderfully adopted the old principle mentioned earlier this season by the head coach of the Canadiens: that of participating in the establishment of a culture while knowing that we will not be there to reap the fruits.

“Sam is part of the group that wants to take this team to the next level,” Allen said. I am realistic. I know I won't be here in a few years, but I want to see this team be successful with Sam, Cole (Caufield) and Suzy (Nick Suzuki). That's why I love seeing Sam play that way. »

To make room for Allen in the roster, the Canadiens traded Cayden Primeau to the Laval Rocket. During this short stay with the big club, the American, who was returning from an injury at the time of his recall, only saw action for 20 minutes.

Nothing to really measure his progress in this rather difficult season for him in Laval.

“It is still in full development. I think he has a bright future, Allen said. Technically and physically, he's ahead of me at the same age. “

And like a real big brother, he made sure that Primeau returned to the American League with peace of mind.

“I told him that it's not because that Sam has been fine lately that there is no future for him here. In a few years, the two could well compose the duo of goalkeepers of this team. »

But, again, we may wonder who will be number one.

Allen was keen to return before the break

Jake Allen did not expect to have to miss two weeks of activity when an upper body injury forced him to visit the infirmary after morning training ahead of the Seattle Kraken visit on January 9.

At the Originally, the Montreal organization had indicated that the case of its goalkeeper would be reassessed daily.

“At first, I wasn't sure how long I was going to miss. First of all, it was a question of feeling. I tried to see if I could get back in quickly, but agreed it was best to wait a little longer,” the New Brunswicker explained.

“It was a matter of precaution. I wanted to avoid dragging this injury all season,” he continued.

Let's just say Allen felt he was on the injured list long enough last season. Various injuries, including a concussion and a groin injury, kept him out for a total of 41 games.

“Before last year, I didn't I had never really been away from the game. That's probably what made me want to come back quickly with the group, said Allen, who has been training with the rest of the team for a few days already. . At the same time, you have to understand that there are still 44 games left in the season. We had to make the right decision.”

At least one game

Allen didn't want to rush his return, but he still wanted to be able to get back to action before the all-star game break and the four-day leave that will follow.

“That's the goal. I want to play at least one game before the break. Because having 9 or 10 extra days without games or real training would make it even more complicated,” Allen said, referring to the ability to find his rhythm and synchronization.

“  ;This is the hardest part. It's the same thing during training camp. The game got so fast. And it's not just in a straight line anymore,” he explained.

Between the weekend of the stars, the Canadian will play three games. Thursday night, against the Red Wings at the Bell Center. Then, two against the Senators; Saturday in Ottawa and Tuesday in Montreal.

It remains to be seen in which of them Allen will be sent into the fray.