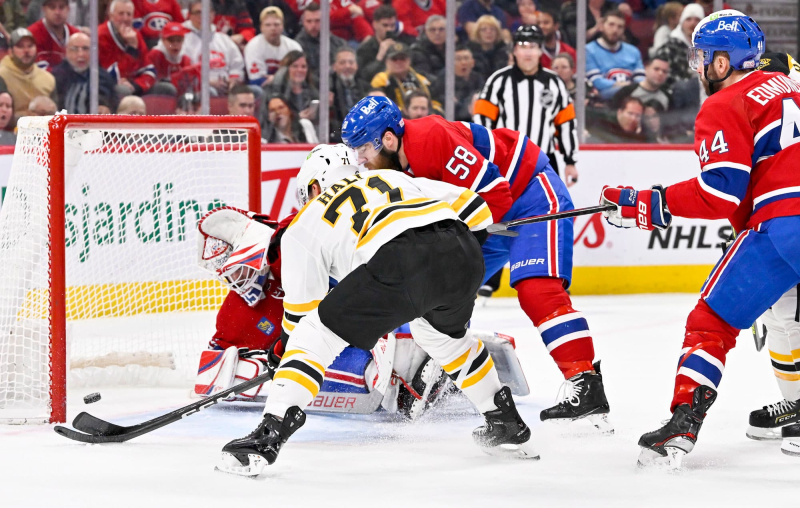 To use the expression of Martin St-Louis, the Boston Bruins have a train going at hellish speed. Passing through the Bell Center for the first time this season, the Bruins' TGV has found a way to gobble up the Canadian's rebuilding locomotive.

The Bruins wrote another page of their formidable season (38-5-4) by triumphing over CH 4 to 2, Tuesday, at the Bell Centre. The many Bruins fans in the stands were hot, but they finally saw a victory for their favorites. They now have 80 points after 48 games, becoming the fastest team to reach that milestone in NHL history.

“It's frustrating, we've worked hard and we deserved a minimum of one point,” said Samuel Montembeault in the Habs locker room.

“Marty said before the game that this was a big test for our group and I feel like we found a way to fight back,” said center Kirby Dach. I don't like the end result, but I'm still happy with our effort against the best team in the NHL. »

Patrice Bergeron did not have his best night in the face-off circle. Late in the game, the Bruins captain won a crucial duel against Nick Suzuki in Habs territory. Seconds later, he scored the winning goal.

“Patrice is not one of the best players in the world by chance,” defender Mike Matheson said. He never has a bad game, he's so consistent. It's incredible. »

In position for an eighth start in a row due to the injury to Jake Allen, Montembeault has once again offered a start worthy of a number one. He blocked 25 of the Bruins' 28 shots, making several spectacular saves.

“Monty has been phenomenal since losing Jake,” Dach said. He gives the team confidence, he makes big saves and he ignites the crowd. I'm happy to see him play so well. »

On the offensive level, Dach carried the attack on his shoulders by obtaining a second match of two goals in the uniform of the CH.

SUZUKI VS THE MASTER

Nick Suzuki has often described Patrice Bergeron as an inspiration. For this visit of the Bruins, Suzuki found himself facing Bergeron very often in the face-off circle. In the first period, the student dominated the master by winning his eight duels. But by the end of the game, the Bruins captain had improved his record a bit, winning seven of 19 faceoffs (37%) against Suzuki.

Kirby Dachwas playing his 200th NHL game. He celebrated this plateau by scoring two goals against the Bruins. Dach beat Jeremy Swayman with a good shot into the top of the net on a power play in the second period. In third, he jumped on a return from Alex Belzile to hit the target again. He broke a personal mark by obtaining his 9th and 10th goals of the season. Last year, he scored nine goals in 70 games with the Chicago Blackhawks.

David Krejci did not play last year in the NHL, staying at home in Czechia with the Olomouc team. Back in Boston and the NHL, Krejci looks nothing like a 36-year-old. Author of a goal and an assist against CH, he now has 39 points (12 goals, 27 assists) in 42 games. “I knew his sense of the game and his competitive spirit, had said Jim Montgomery in the morning. It will never go away. I thought he would need a long time to get back to NHL speed, though. But it's amazing how quickly he picked up the pace. »

Taylor Hall halted a 16-game scoreless streak. He found a hole in Montembeault's armor on the power play in the second period.

+ Kirby DachSamuel Montembeault also deserves this honor, but we will give it to Dach The former Blackhawks finds his bearings at the center position He scored two goals against the Bruins, he played almost 24 minutes, he blocked three shots and won 62 of his faceoffs A big game – Christian DvorakThere are several injuries among the CH forwards Martin St-Louis will need a bigger offensive contribution from Dvorak He was cleared from the scoresheet for a third game in a row