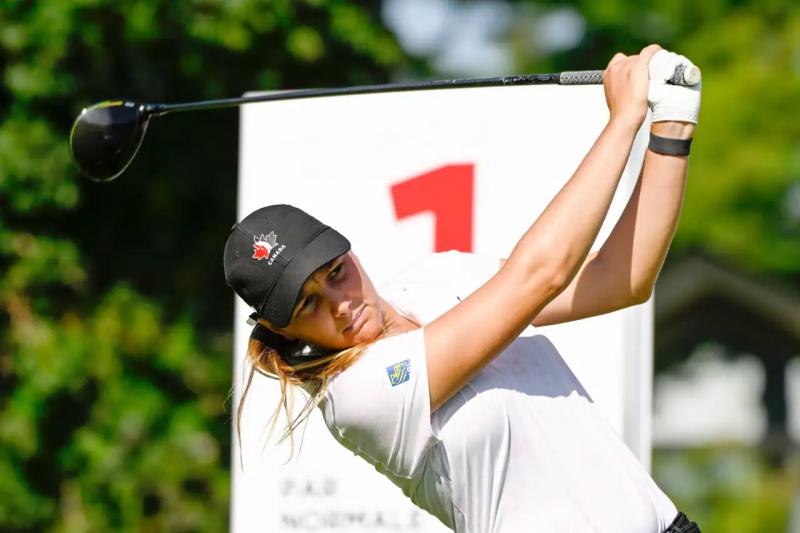 OTTAWA | A small blow. That's all Sarah-Ève Rhéaume needed to resist the ax that fell on Saturday morning at the Canadian Women's Open.

She had crossed her fingers in the morning, when the some 40 golfers completed their second round. The guillotine, however, remained at -2.

At 22, the amateur golfer from Quebec was nevertheless able to leave the Ottawa Hunt Golf Club with her head held high, with a respectable record of -1.&nbsp ;

With five holes to play on Friday night, she was on her way to earning her ticket to the weekend rounds. But a bogey on the 14th flag ousted her.

A rather cruel end for the one who missed a single green in prescribed strokes, that of the 14th, during this second day of competition in the federal capital.

Caught in the thick grass, his ball was also misplaced. The young golfer wanted to play finesse and missed her shot. On the way to the pavilion, she could not redeem her blunder with birdies.

“It's definitely disappointing. I was almost there. I'm going to go home thinking about the shots I could have done better in my two rounds and the putts that could have fallen into the cup, said the national team member who faced a course of one difficulty she rarely encounters.

“I played 72 (+1) in the opening, it's not bad for a first round in the pros, she then recalled. But you also have to look at the data. In my two rounds, I just managed five birdies. It's not a lot. »

Rhéaume will evaluate his performance with his coach Fred Colgan in order to attack the elements to improve in his game in anticipation of his next tournament. Time will fly by quickly as she heads to South Carolina in the coming days, where she will begin her fifth year with the Paladins.

She wants to build her confidence on her recent performances, notably at the successful first stop of the Q-School of the Epson circuit, the antechamber of the LPGA, and this presence at the Canadian Open.

“ Finishing just a swipe away in my first pro tournament is good. I know that I am capable of achieving lofty goals and I want to keep pushing my limits. »

Thibault on the road

Finishing with a +7 record, Thibault headed to the family home in Rosemère on Saturday to rest up after more than a month and a half on the road.

Unsatisfied with her approaches to the greens on the Ottawa Hunt, she will focus on this aspect of her game over the next few weeks.

“I was still precise from the tees and I only reached half the greens in prescribed strokes. I also have to work on my short game. »

After a few days of rest, Thibault will return to Austin, Texas, to join his instructor, Chuck Cook.

Afterwards, the new professional will gather tournament after tournament on the various American circuits. She will attempt to go through Monday's qualifying processes on the LPGA Tour.

Like Rhéaume and Thibault, Maude-Aimée Leblanc and Valérie Tanguay could not resist the ax.

After finishing eighth at the Scottish Open at the end of July, Leblanc missed the ax for the second straight time in as many outings.