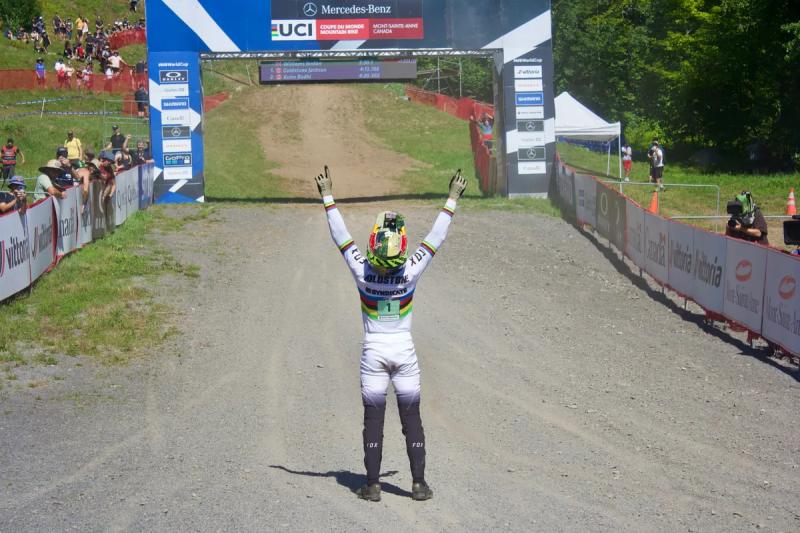 Canadian cyclists were able to impose themselves on Saturday morning during the downhill competitions in the junior categories, as part of the 30th edition of the Vélirium, at Mont-Sainte-Anne.< /strong>

On the men's side, five Canadians finished in the top ten. Confident after his race – with a time of 4:13, which was six seconds ahead of Canadian Bodhi Khun's best time at the time – British Columbia's Jackson Goldstone raised his arms in the sky, in addition to hosting the crowd.

“I didn't really make any mistakes, maybe one, but it didn't slow me down,” Jackson Goldstone said after his run with a grin. The crowd was really good. It's great to hear the encouragement and it motivated me to push myself.”

“It's a great way for me to finish in the juniors, he added. […] On the last jump, I didn't see the time, but I saw green on the screen [indicating the first position] and I was like 'yeaaaahhh'. It's a very good time, but I can't say it's dominant. The other athletes are very good. I gave it my all on the track.”

In the women's junior category, Canadian Gracey Harmstreet finished third with a time of 5:16.805, eight-tenths off second place and seven seconds from winner Phoebe Gale.

“I almost fell a few times,” said Gracey Harmstreet. […] Despite everything, I think I am in a good position to win the World Junior Championship.”