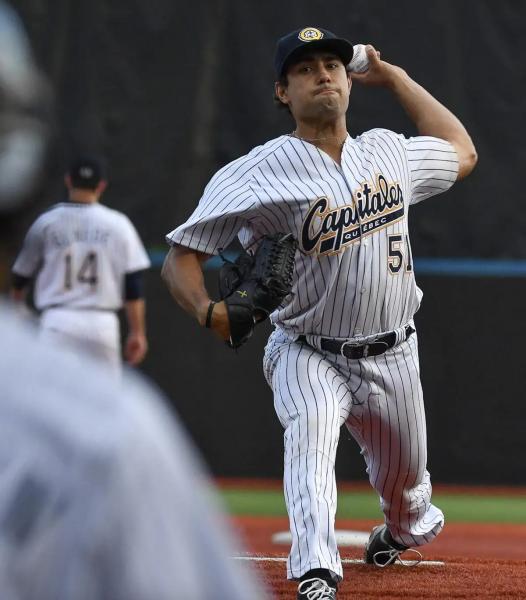 The Capitales de Québec were able to count on an inspired performance from their pitchers and came out at the very end of the duel to beat the Tri-City ValleyCats 3 to 1, Tuesday at Stade Canac.

After ending a painful streak of eight losses by beating the Trois-Rivières Aigles in sparkling fashion on Sunday, Patrick Scalabrini's men seem to have truly turned the page on this dark chapter of their campaign.

Still well positioned in first place in the Eastern section of the Frontier League, the “Caps” are however one game behind the Washington Wild Things, who dominate the general classification.

In the duel of the day, the two teams fought a tough defensive battle until the eighth inning. The visitors' starting pitcher, Joey Gonzalez, gave way to reliever Adam Hofacket, and the latter managed to remove Yoelkis Guibert and Yordan Manduley without too much trouble. He did, however, allow a double to David Glaude and a long ball to Jeffry Parra in quick succession, paving the way for a victory for the hosts.

It was an unfortunate result for Gonzalez, who had been masterful at the mound for seven innings. He allowed just one earned run on three hits, in addition to striking out five batters.

Guibert took advantage of his only moment of weakness to register the other point of the “Caps”, reaching the plate following a bad throw.

Miguel Cienfuegos was also dominant as a man trust of the Old Capital team. Despite a misstep in the third inning, when Brantley Bell sent his offering out of bounds, he fulfilled his mandate by allowing one earned run and six hits over six innings.

The relievers Ian Codina, Samuel Adames and Nick Horvath then joined forces to nail the coffin for the ValleyCats. None of them allowed an opposing player to reach first base.

Even though they failed to produce runs, Glaude and Manduley excelled at bat with two hits. The visitors also only saw two of their players hit more than one shot from a safe place: Bell and Cito Culver.

The Tri-City side will try to extend the suspense by winning the second match of this series which consists of three, which will take place on Wednesday.