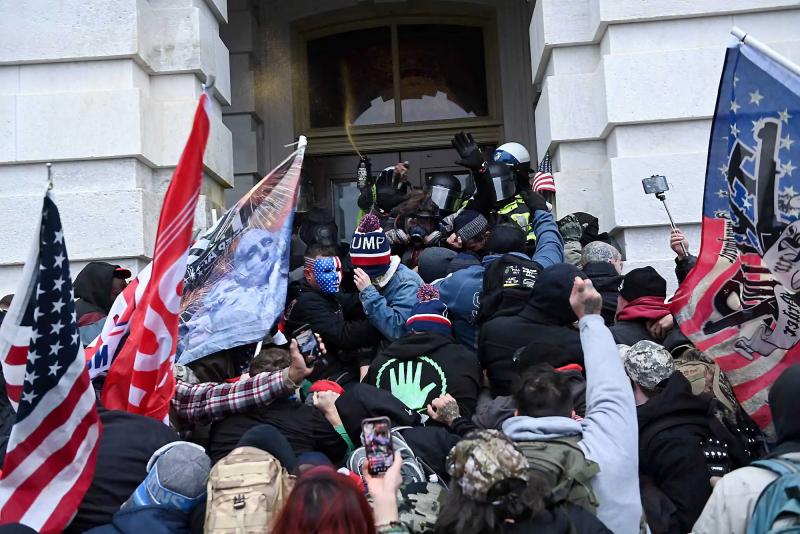 The then President, Donald Trump, was conferring that evening with three outside advisers offering him implausible plans to overturn the result of the 2020 presidential election, won by Joe Biden.

The House Committee investigating the Jan. 6, 2021, assault on the Capitol, led by Mr. Trump's supporters, has uncovered new evidence about what lawmaker Jamie Raskin called 'the craziest meeting of the Trump presidency.

In addition to the President, participants in this December 18, 2020 session were Sidney Powell, a campaign staff lawyer ardent defender of conspiracy theories, Michael Flynn, ex-counsel at the national security, and Patrick Byrne, former boss of the online sales site Overstock.com.

According to the commission, they came up with a draft executive order for Mr. Trump to sign, authorizing the defense secretary to seize the voting machines and for Ms. Powell to be appointed as a special prosecutor to investigate the election.

Once the three officials were allowed into the White House by an employee, White House legal officers were alerted to their presence.

According to Ms. Powell, they were able to spend 10 to 15 minutes alone with the president before Pat Cipollone, the White House legal adviser, rushed to the Oval Office, setting a new “land speed record”. p> Sidney Powell

“I didn't understand how they could get in,” Cipollone told the commission. “I was not happy to see the people who were in the Oval Office.”

“I don't think those people were giving good advice to the president,” he said. -it added.

Mr. Cipollone said he was “categorically opposed” to the appointment of Ms. Powell as special prosecutor and that seizing the voting machines was an “appalling idea”.

According to Mr. Raskin, a “confrontation heated and punctuated by name-calling” between Mr. Cipollone, other White House staffers and outside advisers continued for more than six hours.

Former New York Mayor and Donald Trump's personal attorney Rudy Giuliani joined the group at one point. He had been claiming for weeks, wrongly, that the election had been tainted by fraud.

regular meeting,” said then-White House official Derek Lyons. “People were yelling at each other and insulting each other.”

Cassidy Hutchinson, an aide to the president's chief of staff, Mark Meadows, said she heard the uproar and texted a colleague saying she called the situation “crazy”.

Mr. Cipollone claimed outside advisers were “verbally attacking” him and accusing him of failing to show loyalty to Mr. Trump by investigating allegations of voter fraud.

“We were asking a simple question: “where is the evidence?”, he explained.

Eric Herschmann, another White House legal adviser who was present, said that Mr. Flynn at one time sought to demonstrate alleged election irregularities with graphics showing “Nest thermostats connected to the Internet”.

“It got to the point where you could hear screaming all over the place,” Mr. Herschmann said. “It was late at night. It had been a long day and what they were offering seemed crazy to me.”

Mr. Herschmann also said he pointed out that all of Mr. Trump's legal challenges regarding the election results had been dismissed by the courts. To which Ms. Powell replied, “Well, judges are corrupt.”

“And I said 'all judges?'” Mr. Herschmann recounted. “The least of them is corrupt? Even the ones we named?”

According to him, Mr. Flynn, a retired general, yelled at him that he was a “quicker”.

M . Lyons said the meeting ended after midnight, with a return to square one.