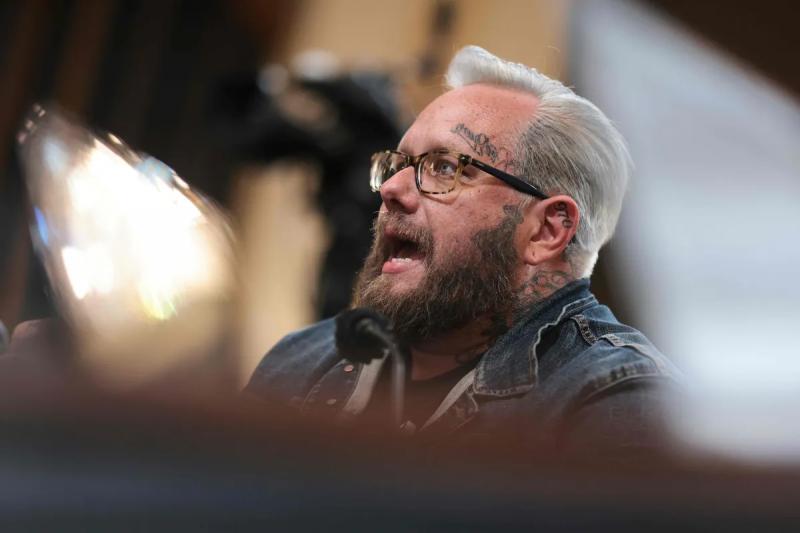 The sedition trial of several members of the far-right US militia Oath Keepers, including its founder Stewart Rhodes, came to a head on Monday, with prosecutors accusing them of heavily armed themselves on January 6, 2021 to attack the Capitol in order to to keep Donald Trump in power.

Justice Department attorney Jeffrey Nestler claimed that Stewart Rhodes, a former military man known for his black eye patch and ranting flames, knew exactly what he was doing as he led his militia members to the headquarters of the United States Congress.

Showing videos of the violent attack carried out by dozens of members of the group dressed in combat gear, Mr Nestler said Stewart Rhodes led them “like a general on the battlefield”, as the elected officials were trying to certify Democrat Joe Biden's presidential victory.

On January 6, 2021, the Oath Keepers “developed a plan for an armed rebellion (…), plotting to to oppose the government of the United States by force,” he said.

“They did not go to the capital to defend or to help. They went there to attack. »

Stewart Rhodes' lawyer, Phillip Linder, assured him that his client, who graduated in law from the prestigious Yale University, was “extremely patriot” and “a constitutional expert”. According to him, the Oath Keepers had come to Washington to provide security.

“The Oath Keepers are almost a peacekeeping force. They make themselves available to help keep the peace in the streets,” he added.

The Oath Keepers had created an armed “rapid reaction force” to deal with any eventuality and it would have been “defensive” if Donald Trump had called on them, according to him.

Stewart Rhodes is tried in along with four regional leaders of his militia.

Their lawyers said in court papers that they did not want to overthrow the government, but expected Donald Trump to declare a state of insurrection, under an 1807 law that allows presidents Americans to mobilize certain armed forces in exceptional circumstances.

But for Jeffrey Nestler, this argument is only a strategy on the part of Stewart Rhodes in order to protect himself.

Since the attack, more than 870 people have been arrested and around 100 have received prison sentences, including the perpetrators of violence against the police. But so far, no one has had to defend themselves against “sedition”.

Stewart Rhodes, Kelly Meggs, Thomas Caldwell, Jessica Watkins and Kenneth Harrelson are the first to be tried for this reason.< /p>

This charge stems from a law passed after the Civil War to repress the last southern rebels.

Punishable by 20 years in prison, it involves planning the use of force to overthrow the government or oppose one of its laws. It is distinct from insurrection, which is more spontaneous in nature.

According to the indictment, the defendants “conspired to oppose by force the legal transfer of presidential power”.< /p>

In concrete terms, Stewart Rhodes is accused of having started rallying his troops in November 2020. “We are not going to get out of this without a civil war”, he wrote to them, two days after the presidential election, on encrypted messaging.