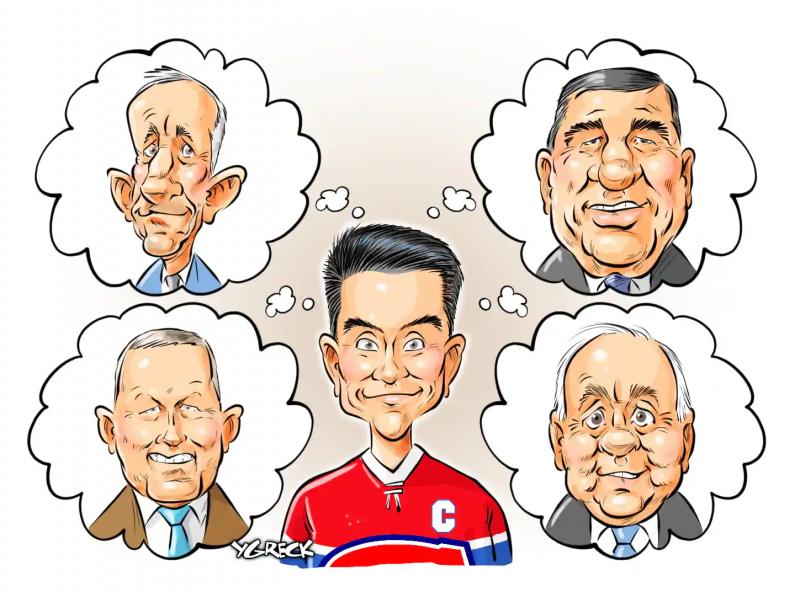 “Suzuki has an 8-year contract, it seems to me that it is enough to learn a few words in French if only to please the fans.

Guy Carbonneau is clear. Being captain of a hockey team is first and foremost for the unity of the club promoting a harmonious bond between team members, young and old, the coach or member of management.

In Montreal, the French fact is there, and for Carbo, it's undeniable, but above all, it's the team. Bob Gainey was a perfect example for him.

“Congratulations to Bob who learned French, but you have to be honest. In the locker room everything happens in English. »

Yvan Cournoyer was served by two types of superb leaders. Jean Béliveau, the tallest, had warned his teammates that he was as much captain during the winter, during the season, in the playoffs as when summer had arrived. Family, personal or other problems, all the players knew that the big Jean had an attentive ear and that he was a real big brother. Yvan even speaks of a father in his case.

“My other outstanding captain only thought of one thing: victory. Henri Richard made it a disease. He was unable to swallow the defeat and his interventions multiplied as soon as the team began to experience difficulties. No patience. »

He didn't win 11 Stanley Cups for nothing.

“I still wonder if he didn’t intervene faster than the coach. He was not embarrassed, he was angry and it was impossible, practical or game, to grab the donut if Henri was around.

Yvan learned a lot from these two very different men and when he found himself with a “C” on his jersey, he tried to amalgamate his own character and what he had remembered from Jean and Henri.

“I liked being a confidant, a big brother like Jean. Help the young, the injured and those who had difficulty in asserting themselves. I also didn't hesitate to invite the players to a private meeting when we were on the road. No coach, I liked when we talked in the whites of our eyes. »

Yvan adds that it is also important that the captain treats all his teammates at the same level and that the players end up bonding together, forming a real block of cement. &nbsp ;

FROM EDMONTON AND LACHUTE

Vincent Damphousse first learned the role of captain from a guy from Lachute who had won in Edmonton.

Vincent was playing for the Oilers, but after the most glorious years with the Gretzky, Kurri, Messier and also a certain Kevin Lowe who saw all the others leave.

He stayed in northern Alberta like a good soldier with a “C” on Chest. A real good captain will say Vincent.

“Kevin taught me a lot with his courage and the confidence he installed in the locker room, even if we were in reconstruction. He had experience and also a great sensitivity. Under the circumstances, it was important. »

Kevin Lowe will later become general manager, which did not surprise Vincent Damphousse who retained the great sense of responsibility that a captain must have, and this, at all levels .

With teammates, it is essential, but also with members of management, journalists and fans.

At the Canadian, Vincent was not chosen by his teammates as captain. One evening in Detroit, from the mouth of coach Mario Tremblay, he learned at the same time as the whole team that he was succeeding Pierre Turgeon.

“I have everything next thought of Kevin Lowe and this leadership that I had appreciated. From the start, I applied myself to preaching by example, and, also, I did not hesitate to consult with the elders. »

One who had advised Vincent well when things were not going well for the team was Guy Lafleur who had encouraged the new captain not to hesitate to bring the players together while being sincere.

“Stay yourself”, said Flower who, according to Serge Savard, could have become captain himself if the management of the team had let the players choose instead of appointing Bob Gainey.

By the way, Damphousse is happy to see Suzuki become captain.

Serge Savard, if he is a great leader at heart, like his predecessor Cournoyer, was chosen by the players and he is very proud of it.

“I have always been inspired by the great Jean Béliveau who imposed respect, distinction and great loyalty. »

For Serge, it was important that the team become the meeting of 20 leaders devoted almost blindly to the team. Earn first and then the rest.

“I always leave the chance to the runner. He's young and if he's smart, he'll understand who he's playing for… and the team and their fans. We'll see along the way. »

For Serge, the captain must dictate respect for the organization, and mainly the coach. He tells a funny anecdote.

“Every day, I traveled to the Forum with Claude Ruel. We were friends. One day, he was appointed as the team's instructor. Our relationship has changed. He was the boss, I was the employee. In the same sense, I have never lacked a second of respect towards Scotty Bowman. »

Respect for authority, a religion and that comes from Laurent… his father.

If he wants to talk about it, Nick Suziki has resources everywhere around him. Even Bob Gainey is often at the Salon des Anciens.

< li dir="auto"> The former president of the Canadiens Ronald Coreyunderwent a one-day operation on the top of his head and he was simply delighted with the care provided at the CHUM.