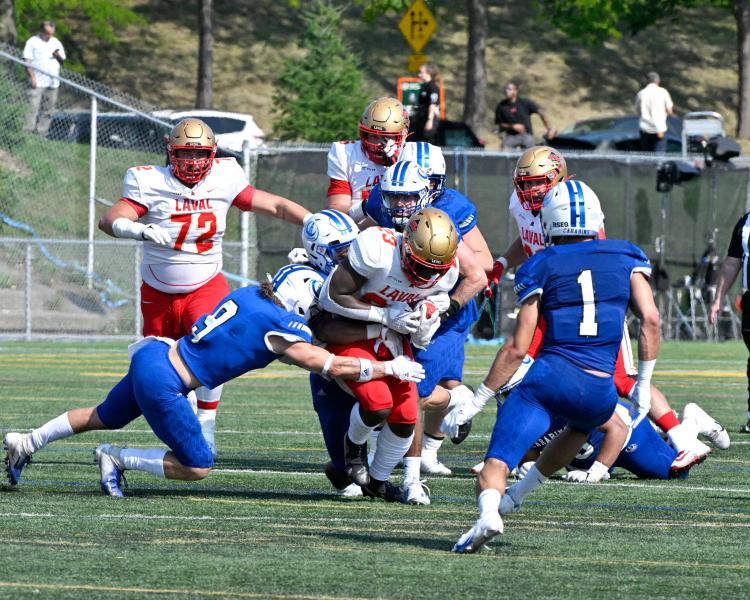 Football fans were treated to a real “classic”, a “typical Carabins Rouge et Or match” which pleased the coach of the Blues, Marco Iadeluca.

“A classic that is not good for your health! But it's a typical Carabins-Rouge et Or match. These are matches that are played until the last play, often a possession. Today [Saturday], it's more true than ever, “summarized the head coach of the Montrealers.

“Really a good football game. I hope the fans in Quebec liked it. They are two great football teams. Rivalry is healthy, but it's fun.

Beyond the result, Iadeluca praised the work of his young quarterback
Jonathan Sénécal on the team's latest offensive series.

“He took the ball with 40 seconds at our 25 line, then he brought the offense in to make a game-winning field goal. That's what makes Jonathan. When the game is important, is on the line, he gets it done,” praised the boss.

The second-year quarterback completed 24 of 43 passes and recorded 294 yards through the air . However, he was intercepted twice.

The main interested party could only see that the match had been “more difficult” for the attack. “I have to give credit to the Laval defense. They played a great performance. We will come back stronger, ”he promised.

Defensive half Maxym Lavallée is among those who caused headaches for the Blues attack. The fourth-year veteran had 7.5 tackles and two knockdowns in the end zone.

However, he believes that he could have done better on certain sequences. “There are always a few plays I could have done more, or helped my team a little more. I too will continue to progress to be the best I can be. »

The author of an interception brought back into the end zone, Michael Broderique relished his larceny, the only major of his team . “When I had the ball I said to myself: this is where I line up, this is where I go. And it paid off today [Saturday],” he said, smiling.

“I saw the receiver back. I closed the window at that time, and then that's when he decided to throw. Maybe he hadn't seen me.

Head Coach Iadeluca pointed to the great experience of his defense as one of the elements that could have made the difference.

“There are a lot of players who are back from last year. We have a lot more depth than last year defensively too. We are super confident with the defense we have. I think that's the kind of football game they'll be playing all season.”

Most kickers dream of a strong end to the game where they can change the game. Philippe Boyer had this opportunity to play the hero and he did it with panache.

His foot had already been decisive in the game when he showed up at the 45-yard line with the victory on his toe. The stat sheet gave him, at that time, three successful field goals in addition to a single. He was not going to miss this golden opportunity.

“I got on the pitch directly and I was trying to put myself in a bubble where I think of nothing and listen to nothing. As soon as the ball left I kicked it and saw it was between the two posts. I was really happy and celebrated with my boys, ”he said, with a smile impossible to take off his face.

However, a few minutes earlier, his third placement of the meeting almost turned into a disaster. A “misunderstanding” between the person responsible for the delivery and the one holding the ball almost cost three points.

The ball finally passed with difficulty and misery between the two posts, in the lower right corner. Boyer made sure to maintain his Olympian composure. “I did not arrive with any stress. I did the same and it gave the result was the best I could have. »

His trainer, Marco Iadeluca, savored the moment for his protege, happy to see him fill up with confidence to this second game of the season.

“It's really fun. Last year he had the chance to play a game against McGill. We knew he was going to be our kicker this year and we wanted to give him game experience. I think it served him well. […] For him to win a match like that I think it's very good for the future, for him, for his confidence. It was a big kick for the team. »