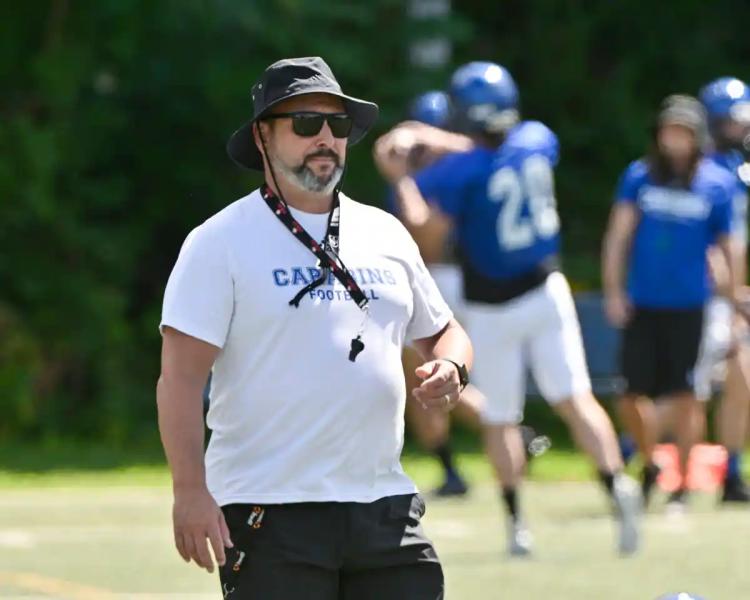 Expect to see some new offensive strategies used by the University of Montreal Carabins this season.

Offensive will obviously count again on the talented Jonathan Sénécal, Hassane Dosso and Bertrand Beaulieu. It's more a change in the coaches that is shuffling the cards for the Blues.

Last year, the unit was under the leadership of Anthony Calvillo and Jason Hogan. Both men are now in the Canadian Football League, respectively with the Montreal Alouettes and the Winnipeg Blue Bombers.

Head coach Marco Iadeluca took over the responsibilities of offensive coordinator, a role he held for the vast majority of his long career. He also repatriated one of his most loyal collaborators by hiring Gabriel Cousineau as pass receivers coach and assistant offensive coordinator.

“We have a great relationship. We can say absolutely anything to each other, because we have worked together for so many years, “said Iadeluca, on the sidelines of his family's training camp.

At the Carabins, Iadeluca first coached Cousineau during his five seasons as a quarterback. The former number 4 then worked for three years as an instructor under the orders of his cicerone, before having other experiences for a few years.

“I am happy to be back home . Marco is my mentor. To be his assistant is a dream come true,” said Cousineau.

To understand what makes the strength of the Iadeluca-Cousineau duo, there is no one better placed than Sénécal.

“Marco has a lot of “football” knowledge, while Gabriel is from the new school. He comes up with new concepts. It's an excellent mix,” analyzed the quarterback of the Carabins.

The observation is identical on the side of Cousineau.

“Both of us think about football the same way. However, being younger, I come up with new ideas, he said. I'm also a bit more technical, while Marco is a football encyclopaedia. It's a marriage that works well.”

For his part, Iadeluca welcomes new ideas from his protege with open arms, even if he does not take them every time.

“In football, we always say that you regress if you stay the same, raised the pilot. You always have to change what you do and how you do it. That's why I like to be surrounded by young people who have fresh ideas.”

Having two voices and as many different ways of explaining a concept is also a plus for Sénécal. and his teammates on offense.

“It's really nice to have both of their points of view,” he said. Sometimes a little advice helps us understand something better. We now have two people who can explain to us, each in their own way. It helps a lot and it speeds up understanding.”