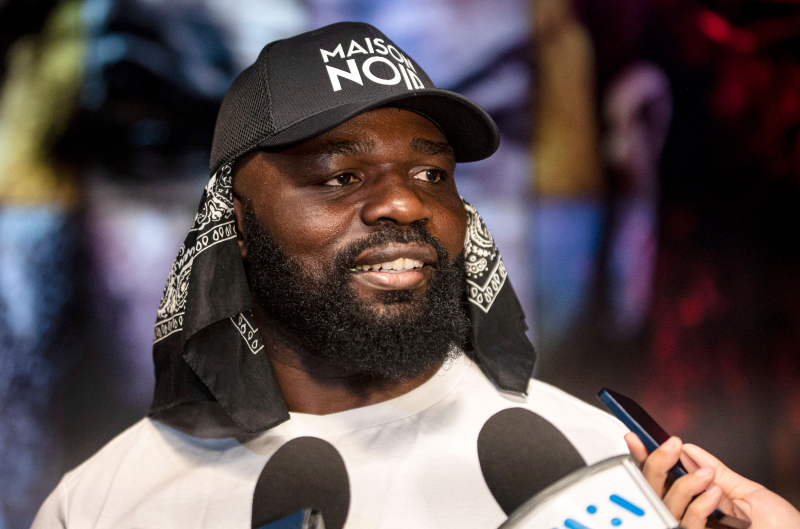 My old friend Jacques Thériault is going to chew the rag again, but Carlos Takam is exactly the opponent it took to measure the evolution of Arslanbek Makhmudov.

Jacques chews because everything that is done in boxing in Quebec is less good than the fights presented by InterBox when Jacques was an excellent publicist there. But you can't help a heart from being nostalgic.

I had read my friend Thériault's comments when I approached Takam yesterday at noon after the press conference. I felt good. It always has that effect on me when I feel very small next to a colossus. I see him regularly with Georges Laraque.

It's big there. It's very big there. There are biceps that are as big as the thighs of long track speed skaters or like those of Martin St-Louis.

-Do you have to train a lot?

-I mostly eat a lot…

Answer brighter than the question.

I spent the whole afternoon rewatching Carlos Takam's main fights. Against Anthony Joshua, five years ago, who dominated him like Joshua did in his prime.

Against Joseph Parker, whom Takam went to the decision against is six years old. Now, when you take the list of the best heavyweights in the world, Joseph Parker is in the top group.

Against Jerry Forrest who he beat by decision.

Against Joe Joyce who beat him by technical knockout as he dealt Takam a shower of blows.

Joshua, Parker, Forrest, Joyce, these are all top boxers that Arslanbek Makhmudov will have to face in the next two years. Takum fought against them in London or Las Vegas. He has two wins and two losses. If Makhmudov is not able to get through, Marc Ramsay and Camille Estephan will be fixed on the rest of the business.

And if Makhmudov lost, would that be the end of everything? In Quebec, maybe. Elsewhere in the world, in a normal country, not at all.

It is only in vulnerable and colonized societies that a boxer has the obligation to always win to avoid being quickly typecast as ham.

Simon Kean lost once and the fans are still traumatized. Steven Butler, 27, has lived with the disappointment of boxing fans since his world championship loss to Ryota Murata in Japan.

Elsewhere in the world, he could fight, win a majority of his fights, lose others and live a life as a professional boxer. Not in Quebec.

Talk about it in Jean Pascal after his two losses against Sergey Kovalev. You remember, it was over. Fallen. A rag who had retired in a field of cows in Miami ready to tell his life story in a biography written by Jean-Charles Lajoie.

It's crazy, Jean Pascal has become world champion again and Luc Gélinas is working on his biography.

The fact that if Arslanbek Makhmudov loses to Carlos Takam on Friday, he will do like Joseph Parker, Anthony Joshua, Joe Joyce and all the other heavyweights in the top 20, he will learn, progress and continue to exercise his trade as a boxer.

David Lemieux lost twice in a row to Marco Antonio Rubio and Joachim Alcine at the Bell Centre. He had a great career and secured his future by becoming world champion and facing Gennadiy Golovkin in Madison Square Garden in front of Donald Trump.

Having said that, I think for now that Makhmudov will take another step in his career. Carlos Takam is no longer very young. He hits very hard, but he's not as quick and tight in defense as he told us yesterday. In any case, when he is overwhelmed, he protects himself badly. It happened against Joshua and against Joyce. But we are talking about a world champion and a holder of the WBC Silver belt. This is not yet the case with Makhmudov.

Makhmudov has the strength, technique and youth to win. But whatever Jacques Thériault, one of the best slammers in Quebec, says, Carlos Takam is a serious test.

Try to be there, Jacquot, we're bored.

The trio of the evening

There are bits where I wondered how Suzuki and Caufield must have felt in front of the antics and the questions in a more Franglais approximate of Julie Snyder. But when I had the temptation to worry about the malaise they must be going through, I remembered how young and rich they were, how much they were idolized by the good people even though they were the pillars of the worst team in the National League, and above all, I repeated to myself that Chantal Machabée, brilliant as she is, had undoubtedly prepared the two young people for what awaited them.

Once reassured about fate of the captain and the scorer, I savored it.

It was still the objective of the show. Create a moment.