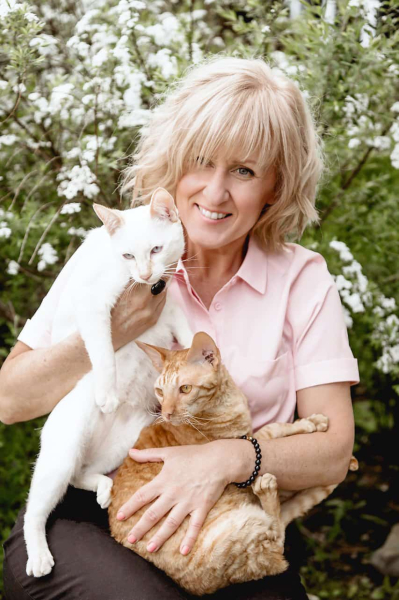 Roméo, or Méo for friends, four and a half years old, is a Rex-Oriental mix cat who looks like a white Siamese while Oscar, one year old, is a red Cornish Rex and a gift from the heaven for Méo.

1. What is the reason that led you to have these two cats?

Roméo (alias Méo) arrived by chance, from a breeder friend, following the death of my old domestic cat, a beautiful ginger. I hesitated a lot before taking it, because we already had two rex cats who did not get along. As soon as he arrived, Romeo and my ginger rex became the best friends in the world. I called them the two brothers: Romeo the charmer, with blue eyes, and Hapi my big red curly hair, a cat who has been very sick in his life. Unfortunately, in 2021, Hapi was hit by a car in front of Méo's eyes. Meo spent three weeks looking for him all over the house, screaming and going outside to see if Hapi was still lying in the street. It was incredibly sad. Seeing his pain, I looked for a friend for him. I was looking for a rex different from Hapi, but life made sure to introduce me to another ginger cat resembling him. Méo adopted it right away.

2. Why did you choose these names?

The name Oscar (artists trophy) inspired me right away. This is my trophy for caring so much for Hapi. We often call it our “little butt”, because it is much smaller than Hapi, its predecessor. Méo is a charmer. A great lover. A Romeo!

My grandchildren call me Mamie-Minou. My cats are gold! But I also have other animals that I like at home: dogs, chickens, etc.

4. How to describe in a few sentences the personality of your cats?

Méo is very affectionate. He is a great lover, but fair with his family. Looks like a sage or an old soul. He is close to my grandchildren. It's endearing. […] Oscar, he is a very sweet little cat who remains a baby in his head. It has more character and is rather territorial. He is less inclined towards children.

5. What is Romeo's favorite game?

His elastic game. He opens the finger-pass drawer and empties all the rubber bands it contains. He plays with rubber bands and leaves them all over the house. He even hides some under the rug.

6. What is Meo and Oscar's favorite place?

Besides everything that looks like a hiding place for Meo, the top of the hot dryer is the two sparrows' favorite place.

7. How can your animals inspire you?

I have written an illustrated book for children aged 3 and up called Meo and Luna. It is inspired by Romeo and our little bulldog. Both are the same age and play a lot together. I wanted to demonstrate the beauty of the bonds of friendship despite the difference.