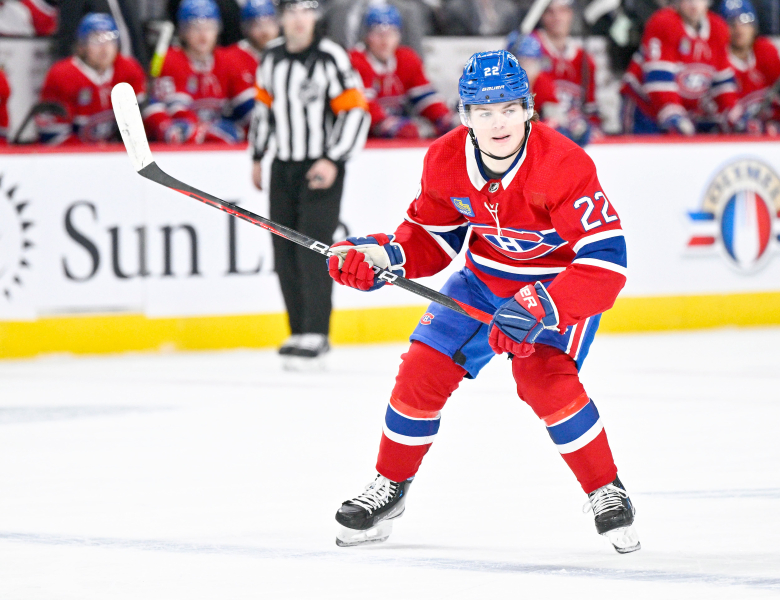 Hard to get used to the idea that Cole Caufield's season is over. He's a bombshell, but I don't believe this injury will affect his contract negotiations.

I don't know when GM Kent Hughes will announce Caufield's long-term contract, but I still believe he'll sign a deal similar to Nick Suzuki's, especially since they say that his shoulder will be 100% healed at the start of the 2022-23 season.

Let's be honest! Caufield was drafted with the scoring tag and he delivered the goods upon his arrival in Montreal at the end of the 2021 season. Holder of the Hobey-Baker trophy as the best player in the NCAA, he helped the CH to go in the Stanley Cup final.

It was more difficult at the start of the 2021-22 season, but since the arrival of Martin St-Louis, he has displayed all the characteristics of a scorer of 40 to 50 goals per season, which the former general manager, Marc Bergevin , hoped.

Furthermore, the 22-year-old skater's good humor is contagious and when St-Louis says his enthusiasm is what the team will miss the most, it shows how much he is precious.

Here is one more card in the game of the agent, Pat Brisson. Sometimes scorers aren't the most popular players in a locker room, but that's obviously not the case with Caufield, who has conquered more than just a hockey locker room, but Quebec as a whole. < /p>

Besides, we already see it in several advertisements, and on the marketing side, it is worth gold.

Brisson has a hand full to negotiate an eight-year contract, approaching 60 million. The chemistry between Suzuki and Caufield is eye-popping and Hughes has every reason in the world to partner them for the long haul, just like the Chicago Blackhawks did with Jonathan Toews and Patrick Kane.

Hugues must maintain the enthusiasm of Caufield and I have the impression that the negotiations will not be a problem. No question of spoiling the sauce by trying to sign it at a discount. I don't see how the CEO of CH could reduce the value or the duration of the agreement.

He has always advocated long-term contracts for stars, as with his former client, Vincent Lecavalier.

Hugues may be able to ask Brisson and Caufield to give him a little leeway for other contracts, but Brisson represents his clients first and foremost and he is not the last comer.< /p>

In short, we know that both parties want to get along and it is only a matter of time before the papers are printed and signed by both sides. There is no rush.

We need stars in Montreal. Caufield meets all the criteria and Hugues knows it very well. Despite his injury, the skater from Wisconsin is in the driver's seat.

We all have a small fear that Caufield will be injured repeatedly as was the case with some players, but no one can make predictions credible in this sense. Connor McDavid suffered a serious knee injury in his rookie season and has been shining brightly since 2016.

For now, let's hope the shoulder surgery is a success. One thing is certain, now is the best time to proceed.

Caufield has nothing left to prove for his contract and the team is going nowhere. No need to take risks and let's prepare for the 2022-23 season.

In closing, I take my hat off to Samuel Montembeault. He knows a whole streak and he delivers the kind of performance the Habs need, night after night.

The loss of Cole Caufield is the nail in the coffin for the Canadiens. They are now condemned to muddy the waters and they have understood their mission. Besides, their victory over the Toronto Maple Leafs did not surprise me too much. The Leafs certainly did not come to the Bell Center with the fear of losing and it cost them a point in the standings. I liked the words of Martin St-Louis who paid tribute to the work of the Laval Rocket coach, Jean-François Houle, as well as the assistants. Players recalled from Laval, like Rafaël Harvey-Pinard, do the job requested by St-Louis.

Darryl Suttercaused a lot of talk following his comments on Jakob Pelletier. I have nothing against the old mentality of being tough on young people, but Sutter went too far, especially for a career opener. I know he spoke personally to Pelletier in a positive way, but in 20 years, when the youngster will remember his first game in the NHL, this story will be part of his memories and it is unfortunate. It's an unnecessary distraction and I expect an experienced coach to protect a young beginner, at least publicly.

Bruce Boudreauwas sitting on an ejection seat at the Canucks and the president, Jim Rutherford, even apologized for the way he and the general manager, Patrick Alvin, let the file drag on. On the other hand, it is always the same scenario with Boudreau. He has a positive impact when he arrives in a team but it does not last long. At least Rick Tocchet will have the respect of the chamber.

That Looks bad for Max Pacioretty who just suffered a second ruptured Achilles tendon in a few months. He has only played five games for the Hurricanes this season and only 39 more in 2021-22 for the Golden Knights. When you get injured so often at 34, the time for retirement is usually not far away. A blow for the Canes!