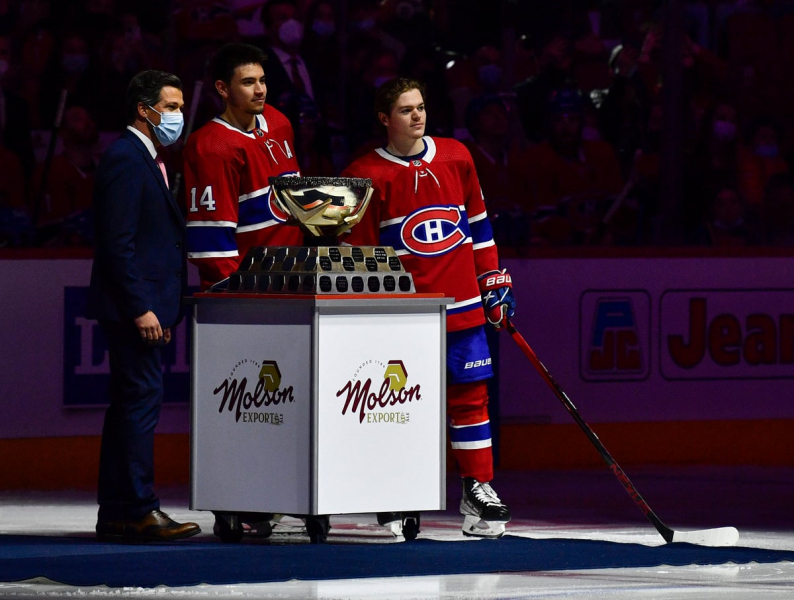 MONTREAL | There is still a huge amount of land to be cleared. But on a simple mathematical level, Cole Caufield and Nick Suzuki are both heading for a 50-goal season. After 18 games, they've each hit the target eleven times.

When you go from a rule of three, it's a 50.1-goal season for Caufield and Suzuki. To achieve this, the dynamic duo will now have to go to hell in addition to avoiding the infirmary. We are still far from the hare cup, as Jean Perron would say.

However, we cannot prevent a fan's heart from dreaming. The small left winger and the captain have been arousing passions since the start of the season.

The magic number of 50 becomes even rarer for two strikers on the same team in the same season. Mario Lemieux and Jaromir Jagr did it in 1995-96 with the Pittsburgh Penguins. Number 66 and number 68 had scored 69 and 62 goals during this most productive season.

If they were to keep up the pace, Caufield and Suzuki would achieve a first in 43 years at CH. It remains a very embryonic project, however.

Suzuki did not score more than 21 goals in three seasons in Montreal and he never reached fifty in the Ontario Junior League, obtaining two seasons of 40 or more goals with the Owen Sound Attack.

In the case of Caufield, he has more the profile of a natural scorer. Last year, the American scored 23 goals in 67 games despite a disastrous start to the season under Dominique Ducharme.

Martin St. Louis described Suzuki as a chess player minutes after Saturday's 5-4 shootout win over the Flyers at the Bell Centre. Suzuki has a knack for predicting moves ahead of time. He showed all his intelligence in extra time by making a perfect pass for Caufield even though there were only about four seconds left on the clock.

“I'm lucky to play with a great passer, he thinks I'm always at the right time and he did it on the tying goal, Caufield said after the game against the Flyers. He is quite a passer, but he can also score several goals. Nick is good all over the rink. We just want to follow him, he is not the captain by chance. »