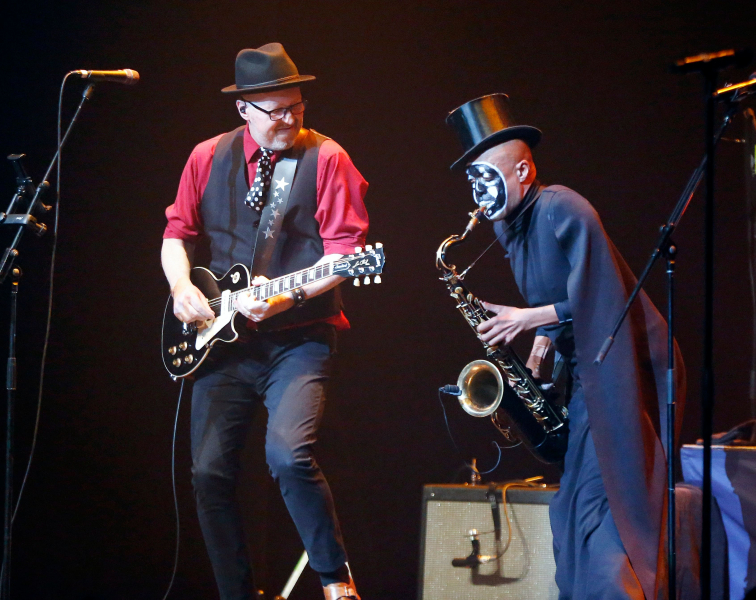 Drawing skilfully and everywhere in the repertoire of the “Thin White Duke”, we celebrated David Bowie in pleasure at the Capitole de Québec. A no-nonsense, no-nonsense celebration where the emphasis was on the music.

Accompanied by bassist Angeline Saris, saxophonist and keyboardist Ron Dziubla and drummer Travis McNabb, the collective, reminiscent of Ringo Starr's concert events, brought Bowie back to life for a little over two hours.

A somewhat messy show at times and without stage elements, except for the costumes of the colorful Angelo Moore, singer of Fishbone and a blurry image of Bowie as a backdrop.

Director of the Sound + Vision tour in 1990, Belew was the musician who came closest to Bowie. He paid for himself by resonating his space guitar sounds on several occasions, such as during the titles Sound and Vision, Fashion, Stay and during Station to Station.

Throughout the performance, Belew, Rundgren, Royston Langdon of the Spacehog formation and Angelo Moore paraded behind the microphone, with vocal intonations close to those of David Bowie.

The dynamic Angelo Moore, with her colorful costumes and powerful voice, was the star of the evening. He was “chilling” with his sad clown costume, vocal variations and dance moves during an excellent version of Ashes to Ashes.

The singer brought a bit of the androgenic side of Bowie, as we could feel during Moonage Daydream and John, I'm Only Dancing. He also manipulated a theremin, a musical instrument producing strange vibrating sounds.

One of the highlights of the first part of the concert was the cover of Fame with the heavy tones and in the top of the neck of bassist Angelina Saris. We felt at that moment musicians who had “fun”. Followed by Fashion and Golden Years, it was a very successful hat-trick.

During The Man Who Sold the World, a rather fast and uneven version, sung by Royston Langdon, it was impossible not to have in mind the slower version of Nirvana.

The classic Space Oddity , led by a sax solo by Ron Dziubla more or less in its place, with vocals by Todd Rundgren and Belew, was vibrant and well felt, with a Rundgren in silver attire. The latter was fortunately a little less outraged than during Life on Mars?

The saxophonist was totally in his place, on the other hand, during the unmissable Let's Dance, well sung by Royston Langdon. Boosted versions of Rebel Rebel, with Moore who made a short visit to the floor, and Sufragette City, where he brought girls on stage, followed by Heroes put an end to this beautiful evening, where we had the feeling of being friends around the music of the great Bowie.

The Celebrating David Bowie tour continues Tuesday evening at the Olympia in Montreal.