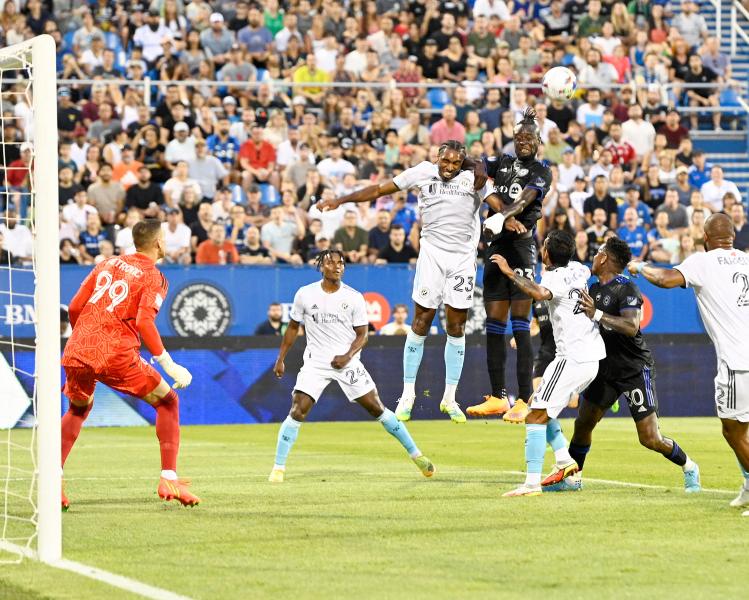 After securing their place in the playoffs last week, CF Montreal could confirm their second place in the MLS Eastern Conference standings on Saturday night.

Wilfried Nancy's team will visit the New England Revolution at Gillette Stadium in Foxborough and this encounter is another milestone in this amazing team's tremendous season.

“Our first goal was to qualify for the playoffs and the second is to finish as high as possible,” explained Joaquin Torres on Thursday.

“If we can confirm this second place at the end of the week, that's what we'll try to do,” added the small Argentinian midfielder.

The Bleu-blanc-noir has 56 points in the bank with three games remaining, and the New York Red Bulls, who are third, have 50.

The Bulls visit Bronx rival New York City FC (46 points) who is just behind. They also have three games left to play.

With a win, CF Montreal would secure second place, which would mean they could play a minimum of two playoff games at home, provided they win in the first round, of course.

But a draw paired with a loss or a draw by the Red Bulls would also be enough, as would a loss combined with a failure by the Bulls, who feel the breath of New York City on their necks.

This is the last duel of a rather grueling streak for Nancy's troupe, who will enjoy a few days off when they return to Montreal. Due to the international break, the club won't play until October 1.

But that's not a variable the head coach is going to take into account when deciding on his starting XI.< /p>

“It's not the break that will decide the team I'm going to put on. The “Revs” have a style of their own. I'm going to use the players who I think will be able to help us perform against this.

“I made the changes against [the] Chicago Fire because it was time to do it. It's going to be our sixth game in 21 days, so I'm going to have a look at the team I'm going to put on.”

Here you go another great illustration of how everyone has contributed to CF Montreal's success since the start of the season. Nancy recalled that this was not a new concept for her men.

“Last year was the same. I don't really like to talk about myself, but I'm one of the coaches who rotate the most.

“Sometimes I change players because I need to see something else even if we won the game. There is a tactical aspect or player profiles that bring me something very specific. It's collective, each player is important, whether for five or 90 minutes. They put their ego aside and they know why we do it.”

Torres confirmed that everyone buys into this concept in the locker room.

“Every player feels that he has a compromise towards the group, no matter what role he has to play, that he plays a lot or little.”

“The best tool for a coach is competition,” said Nancy. When there is none, the player thinks he will make less effort. Me, I like having players compete and they level up.”

The Revolution has changed a lot

It's one to midnight for the New England Revolution, who with 38 points are three points behind the Columbus Crew and the last available playoff spot.

The “Revs” are 10th in the East while the Crew sits seventh. But the Ohio team still has four games to play against three for the New England team, which could almost close the books on its season in the event of a loss this Saturday.

It's an understatement to say it's been a tough campaign for the Massachusetts squad, unable to find their groove.

Just a year ago, this team set a new MLS record with a collection of 73 points, which had earned him the Supporters' Shield, a trophy awarded to the champion team of the regular season.

Wilfried Nancy said he understood his counterpart's comments, which were as much a matter of truth as of motivational technique.

“If he said it, he meant it. I saw the matches and, indeed, they could have done better, I understand the reaction of the coach.

“In general, when a coach says that, the following match, they [the players ] will come strong. We already suspected it because we had a good game against them at home.”

The “Revs” visited CF Montreal at Stade Saputo last month and it didn't go well for them, as they were beaten 4-0. So there may be a little revenge that will animate them this Saturday.

“They still have a chance to play their cards for the playoffs, so we're expecting a tough game and we're going to be ready for that.

“Of course the players will run a lot more, will do a lot more. We will try to score a goal to see how they will react.