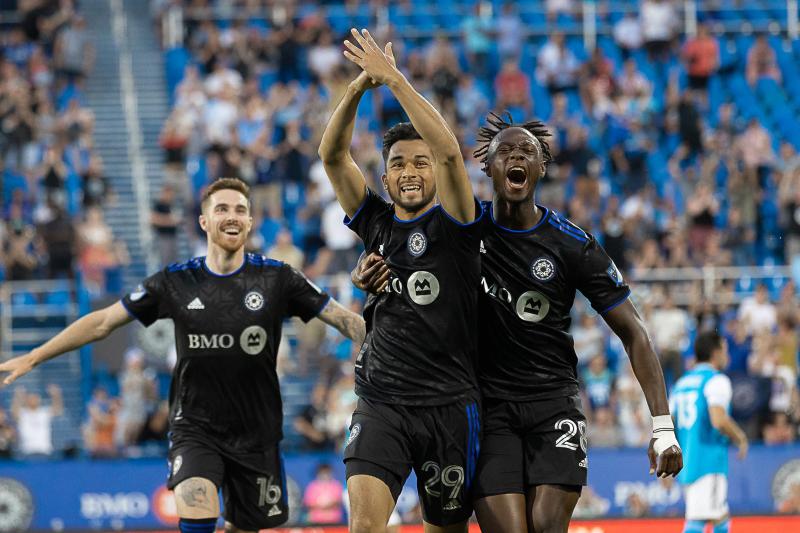 CF Montreal celebrated Wilfried Nancy's 50thth game at the helm of the team in fine fashion by winning 2 to 1 thanks to a goal by Mathieu Choinière early in the second half, this Saturday at Stade Saputo.

It couldn't have been more perfect as a Saint-Jean-Baptiste celebration in front of 13,520 spectators. Entering to start the second half on the left flank, Choinière scampered off to make a Nacho Piatti hook in the opposing box and frame his shot in the top corner in the 47th minute.

The Quebecer from St- Alexandre scored in front of the Ultras who made a surprise return to Stade Saputo this Saturday night. In the victory, Romell Quioto collected a goal and an assist.

Montreal also had a much better second half than the first which was not successful.

The Bleu-blanc-noir rubbed shoulders with a fairly diminished Charlotte team since ten players remained in North Carolina due to the COVID protocol.

However, the Montrealers had to work hard to achieve this first victory since the return from the international break after a loss against Austin and another against Toronto in the semi-finals of the Canadian Championship.

Montreal had been shut out during of these two encounters. But in the most column of the evening, CF Montreal moved up to second place in the MLS Eastern Conference with 26 points, one less than New York City FC, which however played two games less.

Montreal will play its next two meetings abroad, visiting Seattle next Wednesday and the Los Angeles Galaxy on July 4.

Montreal set the tone with a goal from Romell Quioto in the 6th minute on a fine pass from Zachary Brault-Guillard who did a good job on the right flank.

But Charlotte replied quickly, three minutes later. Sebastian Breza miscleared a free kick by boxing it into the feet of an opponent. It all ended with a touch in the back of Guzman Corujo's goal.

And Charlotte was busy breaking the rhythm with numerous “injuries” followed by miracle healings.

During this time, Montreal controlled the ball and managed its passes, but did nothing worthwhile, like what the construction without Djordje Mihailovic, it remains complicated.

< li dir="auto">He started the second half and scored almost immediately on a superb shot. He plays a very physical match.

Sweet Carolineresonated again in the CF Montreal locker room after this victory which seems to have done everyone good.

Last Saturday, the team lost 1 to 0 and it was freezing outside. This Saturday evening, it was victory and the suffocating heat.

And yet, Mathieu Choinière's goal early in the second half had a very contrasting effect on Wilfried Nancy.

< p>“My wife often criticizes me for not being expressive, but I got the chills.”

But it must be said that the official, Nima Saghafi, made the suspense last since there was a video review because we thought there had been an offside.

“  When they go to see the video and it takes time, most of the time they go back on their decision, said Nancy with good reason.

Choinière, for whom it was a third goal this season , got hot while waiting for the verdict.

“I was stressing, wondering what they had seen that we hadn't seen. When he pointed to midfield, I was relieved,” said Choinière, who appeared in front of the media wearing a blue hat adorned with a fleur-de-lis.

Wilfried Nancy had the happy hand with his changes when he brought in Choinière and Ismaël Koné to start the second half to replace Lassi Lappalainen and Ahmed Hamdi.

team was transformed and played a much better second half.

“We provoked our chances, insisted Nancy. The guys have been more proactive. I don't like being passive, I want us to provoke things.

Choinière, who was named player of the match, admitted that scoring as soon as he came on sent a massive dose of energy.

The match also marked the return of Mason Toye after more than ten months of absence due to two successive injuries.

And he almost imitated Choinière as his header on a pass from Romell Quioto just missed the target on the first ball he had.

“I wish he could score,” Quioto admitted. He has worked so hard in the last few months. We are very happy to have him back. ”

“It has been almost a year since he last played. I really wanted to give him a few minutes. He was very, very, very, brave,” added Wilfried Nancy.