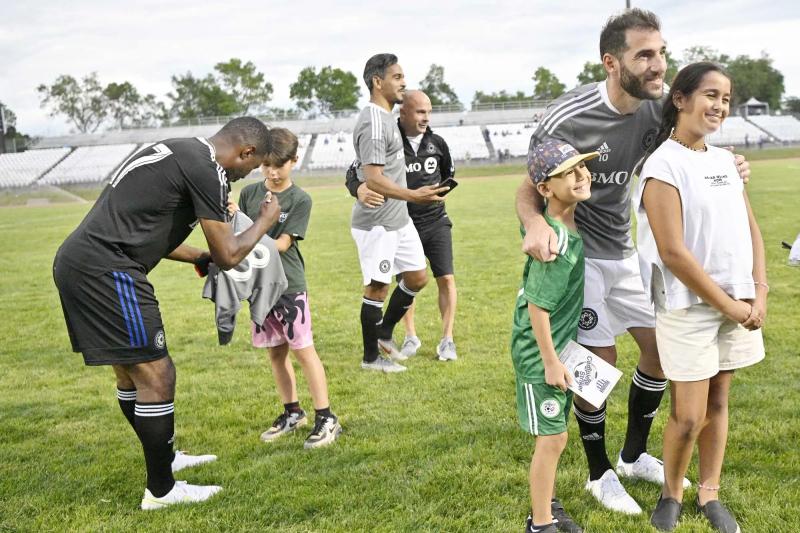 It was the traditional media game organized by CF Montreal on Wednesday evening. But many veterans have been added to it, including Nacho Piatti, a new milestone in the club's desire to reconcile the club with its past.

The match was played at the Complexe sportif Claude-Robillard, a decision that is not insignificant.

“We made the event here to bring us back a little in the past, confirmed the president and CEO Gabriel Gervais. I had chills when I arrived at the Claude-Robillard center. I played for the last time here in 2007.

Since he took office, there has been a clear desire to make an important place for the players who have marked the history of the Montreal Impact even if the name is no longer there.

This match was an opportunity to reconnect with Nacho Piatti, the club's all-time leading scorer with 79 goals in 163 games.

“It's a lot of emotions, admitted the Argentinian, all smiles. It's been two and a half years with the pandemic. It feels good to visit friends and catch up with everyone.

“I have always felt good here, it’s like my home. I will be behind the team on Saturday. »

Piatti has lost none of its form. It must be said that he has been retired for only a few months. He admits that he reluctantly left town before the start of the 2020 season.

“It was very difficult because I was here for six years. The family wanted to go back and my father is there. It was a difficult decision to make, but if I had stayed here, the family would have been in Argentina. But I miss Montreal. »

Now that he has hung up his cleats, could Piatti play a role in CF Montreal? A sentence escaped by Gabriel Gervais suggests that the door is open.

“I did not know him very well before taking office, but I had several communications with him. It was good because he wanted to come to Montreal to have some discussions with us, ”he first said.

“Nacho is a person who is very respected, whether in Argentina or elsewhere. We have always wanted to collaborate with former players to be ambassadors or to help us find new players,” Gervais then mentioned when asked for details.

And Piatti would be more than open to collaborate with his heart club. “We'll see, I'll talk to Olivier and Gabriel. If the club needs anything, I'll be here. »

The elders were numerous to take part in this meeting, like Charles Gbeke who made the trip to Brazil. We also noted the presence of the former coach, Valerio Gazzola, John Limniatis, Ali Gerba, Patrick Leduc, Patrice Bernier, Hassoun Camara, Laurent Ciman and Wandrille Lefèvre, to name a few.

To bridge the gap between generations, dozens of young people from the Academy were on hand, as were Djordje Mihailovic and Kei Kamara from the current edition.

Mauro Biello, who often thrilled the Claude-Robillard stadium was one of the old ones.

“I have a lot of memories here. It's always special to see my teammates again, to play with them again and to relive the emotions we experienced together.

Biello had the opportunity to play next to Nacho Piatti rather than talking to him about the sidelines like when he was managing him.

“It was the same tactic than when I was a coach, we give the ball to Nacho.

“It was cool to see him on the pitch because he was a special player for this club. He has done exceptional things for the club. »