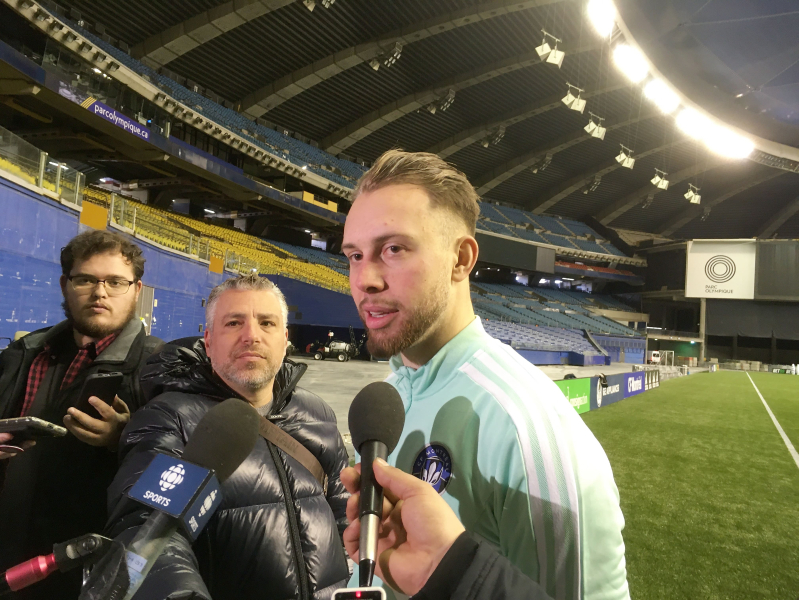 After two seasons away from home, goaltender Jonathan Sirois is finally ready to earn a spot with CF Montreal.

“ It's time to show the club that I am capable of playing professional matches here in Montreal, in MLS. That's my goal,” he said straight away on Wednesday.

“I'm Quebecer, I'm Montrealer. My dream since I was very young has been to play here, at Stade Saputo, in front of my family and friends and in front of the whole city. It's a pride and I've been waiting for this moment for years.

And his chances are good since Sebastian Breza is no longer part of the plans.

“There was no promise, but I'm not coming to camp with the same naivety as last year,” Sirois said. I know James [Pantemis] finished the season really well last year, I know he might have a little head start. But nothing is cast in stone. I always have something to play for. It's up to me to show the new coach [Hernan Losada] that I belong here.”

A goalkeeper in Montreal…

In front of Valor FC in Winnipeg, in the Canadian Premier League, Sirois distinguished himself by being voted the best goalkeeper on the circuit in 2021. But last season was tougher.

“I learned a lot, especially how to deal with being on the bench more often and having to come in and play important games, a- he recounted. This is something that I will be able to bring this year. If I just play 5-6 games, I have to be good.”

“I grew as a player, but also as a person,” added the 21-year-old, who is inspired by Los Angeles FC's Maxime Crépeau.

And the pressure doesn't scare him.

“It's not always easy to be a goalie in Montreal, no matter the sport! I'm ready for that. I saw it from the outside and I experienced it a bit with Evan Bush and Clément Diop [in 2020]. »

Like Sirois, 21-year-old George Campbell wants to impress. Acquired in December from Atlanta United FC, the versatile 6 2 inch, 185 lb American defender has had time to recover from his emotions.

« When I got the call, I wasn't sure what to expect. I was pretty sad to leave Atlanta, he admitted. I played against Montreal a few times and it's a team that plays very well and I'm happy to be part of it. There is a new coach and I think that brings new energy and many want to prove that they are good players.