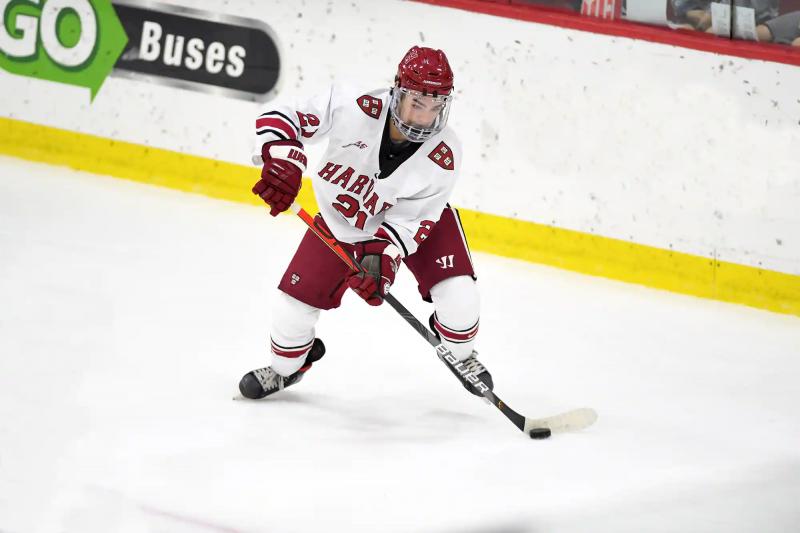 MONTREAL | With nearly 40 players and 13 coaches on the same rink, a player needed a bit of magic to stand out from this crowd. But Sean Farrell found the way to make it happen.

Farrell, a fourth-round pick in the 2020 draft, seemed to dance with the puck during the various drills. He also made Juraj Slafkovsky happy by serving him a perfect pass in the crease to allow him to score.

“He is good, he has talent and skills, said Alexandre Burrows during of a casual conversation with a small group of journalists. I've never seen him in person, but I feel like he's taken a beating too.”

Of all the Canadiens' prospects, he remains one of the most intriguing. The 20-year-old played his first season last year with the Harvard University Crimsons. But in addition to discovering the pace of play in the NCAA, he also wore the colors of the United States at the Beijing Olympics and the World Championship in Finland.

“It was big for me , Farrell acknowledged. I faced very good players, men who were difficult to move. It was good for my learning.”

“It was great to have such experiences,” he continued. I played against pros at the Olympics and at the World Cup. There is a big step. I realized that I could play at this level. But I also learned that I have to get a little bigger and stronger. I was following the rhythm, I could make good plays.

In his early days at Harvard, Farrell was one of the offensive engines of Ted Donato's team with 28 points (10 goals, 18 assists) in 24 games. Upon his return from the Olympics, he missed a few games with an upper body injury that resembled a concussion.

The Massachusetts-born winger didn't think to initial his first contract with CH despite a promising start at Harvard.

“I wanted to go back to Harvard,” he explained. It was clear in my mind. I still have a lot of things to improve before taking the leap. I want to dominate at the NCAA level and help my team win.”

“For next year, we will have a very good team at Harvard. Several guys from the core of the team will be back. For me, I will seek to establish myself as a leader. I would like to be one of the guys who transport the team. I would like us to win the Beanpot and fight for the national championship (Frozen Four).”

Drafted in 2020, during the first of the NHL's two virtual auctions, Farrell had never yet donned the CH uniform for training.

“I find myself in Montreal in the environment of the Canadiens for the first time. I had already visited Montreal at the age of 8 or 9 for a tournament, but I don't remember too much.”

“From what I hear from Montreal, there are very frenzied supporters. I thought it was cool to see so many people following our training. It shows the passion they have for the team. They traveled to see young people.”

A rival of Slafkovsky

Sean Farrell and the American team lost 3 to 2 in shots play-off in the quarter-finals at the Beijing Olympics against Slovakia. Juraj Slafkovsky scored the first goal of this match on February 16.

“Everyone on our team was in shock. There was a youngster with a gate dominating, Farrell said of Slafkovsky. He was the best player for Slovakia on the ice. He was big, powerful, he skated well and he scored goals.

“He controlled the puck. Once he has the puck on the paddle, he can protect it well and he has nimble hands, he continued. We had several pro players and they couldn't get the puck out of him.”

“You can see why the CH drafted him in first place, mentioned the American. He is really big for an 18 year old. I met him, he's really nice. I was happy to be on the ice with him.”

Slafkovsky finished atop the Olympics in scoring with seven goals in seven games. Slovakia had won the bronze medal. Finland had won gold by beating the ROC in the final.