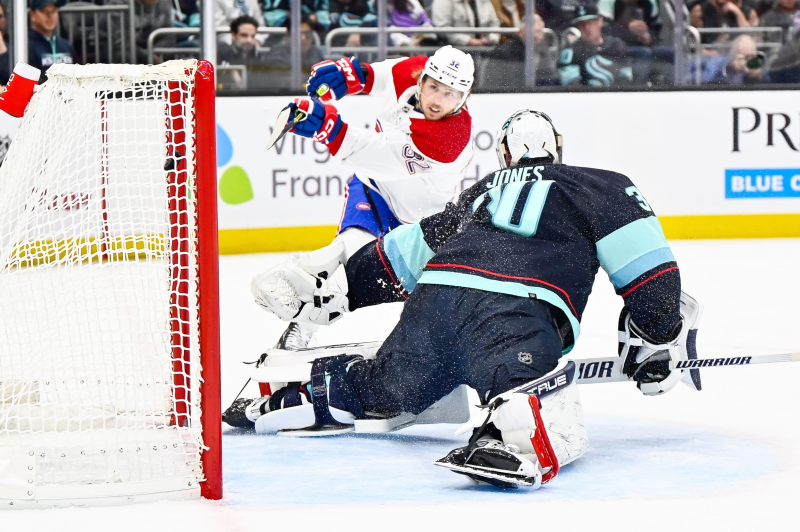 SEATTLE | Shane Wright scored his first NHL goal against the Canadiens, but it wasn't the perfect story. The CH screwed up a possible script for Hollwood by leaving the Climate Pledge Arena with the victory.

Despite a low total of 15 shots, the Habs triumphed over the Kraken 4 to 2 yesterday in Seattle to sign a first victory against the baby of NHL teams. Last year, the expansion team scored two wins in two outings against CH.

In the register of firsts, we note the first goal of Jonhathan Kovacevic in the big league, Rem Pitlick's first goal of the season and a first full game without Sean Monahan this season.

“I was so happy when I saw the puck come in, I had been thinking about that first goal for a long time,” Kovacevic said with a smile. It's a dream to play a first game, it's another dream to score a first goal. But it's even better when you do it in a win. “

” It feels good to contribute to the victory, added Pitlick. It's a big win for us after a tough game against the Canucks. »

Like the visit to Calgary, Jake Allen played a key role for the winners. The New Brunswick native goaltender stopped 31 of the Kraken's 33 shots.

On paper, the Habs may have looked like a weakened beast for this visit to Washington State. There was a second game in as many nights, a late arrival in Seattle, a squandered four-goal lead the day before in Vancouver, injuries to David Savard and Monahan, but it wasn't enough to stop this brave team.&nbsp ;

“The Kraken scored at the very end of the second period and it was 4-2 after 40 minutes,” recalled Martin St-Louis. It was the same score as the day before against the Canucks. But we handled it better. I was happy with our reaction and I'm very proud of the guys. »

There was the duel between Kraken and CH, but also that between two big names from the last repechage, Wright and Juraj Slafkovsky. Kraken number 51 scored a goal, but Slafkovsky also responded with an assist on Josh Anderson's goal.

Once again, the Canadian has found a way to thwart the plans. For this long journey of four games in six days in Calgary, Edmonton, Vancouver and Seattle, the most pessimistic expected a meager harvest.

But with a record of two wins, a loss and an overtime loss, St. Louis and his men will go home with five points out of a possible eight.

“I see that better than a .500 record since we have five points out of eight,” said St-Louis. Jake (Allen) had a great trip for us. Even in Edmonton, he had played a good game, but the Oilers had scored five against three. I'm happy for him. »

+ Jake AllenAllen was eager to return to Montreal to see his three young daughters Number 34 was the best CH player for this game against the Kraken He made a superb save against Shane Wright in the first period and he blocked Yanni Gourde on the breakaway in third to cut the legs to the locals – Evgenii DadonovWith the absences of Gallagher, Drouin, Hoffman, there are holes on the wings Dadonov could take advantage of this situation to gain points But the Russian does not succeed Used for more than 17 minutes against the Kraken, and within the 1st wave in numerical superiority, he did not fire a single shot

With the injuries to David Savard and Sean Monahan, the CH was left with only 18 healthy skaters. Martin St-Louis had no choice but to bet on a formation of seven defenders and eleven forwards. Arber Xhekaj, who found himself on the wing for the warm-up period, did not make any presence in an attacking role. Number 72 and Chris Wideman were the two least used defenders.

It's not just Shane Wright who scored his first NHL goal in that game. Johnathan Kovacevic also discovered this feeling when he beat Martin Jones with a wrist shot from the point in the first period. In his 23rd game in a CH uniform, but his 27th in the NHL, Kovacevic has now inherited the puck from his first goal.

A record on the road

Visiting the sublime Climate Pledge Arena for only the second time, the CH scored a team record. In the second period, Cole Caufield and Josh Anderson hit the target within just seven seconds. This is a new mark for the Habs for a game on an opposing rink. Before that, the record was eight seconds for two goals.

Before the game, Martin Jones had a very low save percentage at .893. Philipp Grubauer had an even more disastrous return at .868. The Canadian did nothing to restore Jones' statistics. In the second period, the visitors scored three goals on just four shots.