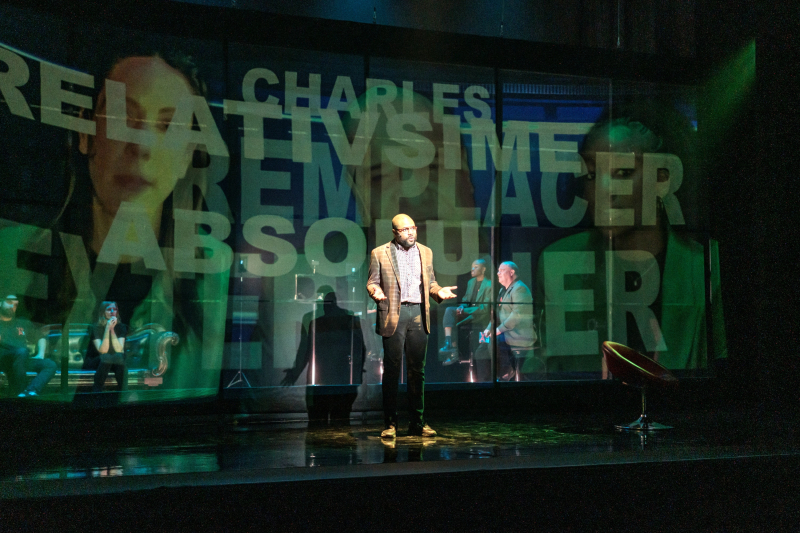 How far to go to defend your ideas? It is with intelligence that Jean-Philippe Baril Guérard poses this problem with You are animal, climb at the Théâtre de Quat'Sous.

The playwright and novelist had the genius to imagine a Quebecois Charles Darwin who publishes his shocking bookOn the Origin of Species in Montreal in 2002. His work shook up the academic world and created a host of misadventures for it. Reviled by some, misunderstood by the media who distort his words or praised by racist citizens, this poor Darwin finds himself at the heart of a storm that makes his life hellish.

In the form of mock documentary theatre, this play relies heavily on parody and humor to entertain the audience. Well-known Quebec public affairs programs are notably the subject of well-felt pastiches.

A lot of rhythm

The direction of Patrice Dubois is creative and dynamic. He uses several forms of mediums to render the media whirlwind in which Darwin, embodied by Lyndz Dantiste, is immersed. He draws as much on video projections showing fictitious interviews as on others imitating TikTok.

Jean-Philippe Baril Guérard also performs in this show. He plays the one who meets Darwin and his relatives in order to make a documentary theater work. The author is surrounded by a solid cast, made up of Isabeau Blanche, Laurence Dauphinais, Harry Standjofski and Phara Thibault.

The strength of this proposal is to have imagined how this book on the theory of evolution and natural selection would be received today. Even if they are caricatured to lighten the subject, these reactions remain plausible. They shed light on the distortion of facts, the role of the media, the limits of scientific popularization and the capacities of understanding of citizens who take a stand without having read the book. Due to this tone, however, some more serious moments lose intensity.

This show also highlights the adaptability of species and their chances of survival if they cannot change, a posture which makes you think about the destiny of Quebec society. By shaking up received ideas with originality and intelligence, this play certainly succeeds in finding its place in the theatrical jungle of Montreal.

A play by Jean-Philippe Baril Guérard.