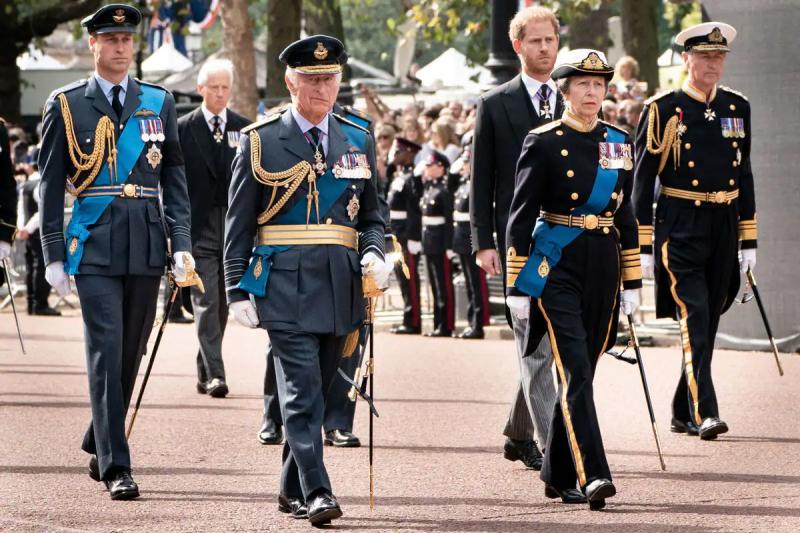 Some had nicknamed him the activist prince. After having put on the heavy royal clothes, Charles III, so different from his mother Elizabeth II, must now embody an impartial and serene monarchy, whose every word and gesture will be commented on.

Head of state with largely symbolic power, a man of sometimes controversial passions, he is no longer supposed to have the slightest opinion in public, which would risk appearing as political interference.

His first statements will have reassured the most pessimistic. Since the death of Elizabeth II on September 8, Charles III, “aware of the weight of history”, declared that he would walk in her footsteps and serve all his life.

He recognized that he could no longer “devote as much time and energy to the charities and causes” that are dear to him, foremost among which is ecology.

Gathering, he traveled to Scotland, Northern Ireland before Wales on Friday, the three constituent nations of the United Kingdom with England.

Accessible, it offered a walkabout in front of Buckingham Palace, another in Belfast. A woman planted a kiss on his cheek, an unimaginable freedom under Elizabeth II.

In the immense wave of collective emotion since the death of the 96-year-old queen, his popularity has surged, him long unloved by the royal family: 63% of Britons think he will make a good king (YouGov poll). 15% believe the opposite. In May, they were at 32% against 32%, with 35% undecided.

At 73, Charles III is the oldest monarch to accede to the British throne. He had been waiting since he became crown prince at the age of 3 and a half, an awkward and lonely child.

He had time to train: he traveled to nearly 100 countries, met many of the great of this world, shook millions of hands. Inaugurations, medal ceremonies, state dinners and garden parties, he knows. Bonds too.

“He fully understands what the monarchy is and how our constitution works,” monarchy expert Penny Junor told AFP.

He “will not allow himself the freedom of speech that s authorized Charles Prince of Wales. He moved on. The king is the one who is above controversy, above all divisions, above opinions, he is the one who federates, who brings people together, ”adds Isabelle Rivière, another royal expert.

Elizabeth II, who reigned for 70 years, represented continuity in the enormous changes of the century.

Charles III will have to represent change in continuity: in the United Kingdom, but also in the other 14 Commonwealth realms, some of which aspire to become republics.

And he will also have to manage the image of a broken family, his brother Andrew who has become pariah after a sex scandal, his son Harry who is about to publish a book secrets.

Although he was more present, often replacing his mother in declining health, many knew little of King Charles beyond his over-publicized divorce from Princess Diana, his affair, still married, with Camilla married in 2005, and his commitment to the ecology, which in the 1970s made him pass for an original.

For years, he has insisted on the urgency in the face of global warming, defends organic farming, alternative medicine, short circuits . It has published its carbon footprint since 2007.

A critic of modern architecture, he also had two small towns built on his land, combining his ideas of traditional architecture and sustainable development.

After creating his first charitable organization in 1976, the Prince's Trust, which has helped over a million people, others have followed, for which the prince has raised millions of pounds. He was president or benefactor of over 420 charities.

Accustomed to being served, willingly manic – rumor has it that a valet irons his shoelaces – he does not like to be contradicted.

“He is a bit egocentric, he grew up being the center of his universe, with people telling him he was wonderful,” says Penny Junor.

During the proclamation ceremony in London, he makes it clear with a curt gesture and a silent grimace that he wants a pen holder left on the table where he must sign a document to be removed immediately.

In Northern Ireland, he gets mad at a leaky pen. “God, I hate this,” he said, wiping his fingers. “I can't stand the damn thing,” he said before leaving the room.

“He wants things done by yesterday,” Camilla, now queen consort, had said of him. , to the BBC for his 70th birthday. He “would like to save the world”.

In the 2000s, he had written to ministers to talk about health, education, the war in Iraq or illegal fishing. These “black spider memos”, in reference to his calligraphy, had been perceived by some as interference.

His sometimes criticized lifestyle will now be fed by the sovereign allowance — 86 million pounds (99 million euros) — paid for by the taxpayer, the income of the Duchy of Lancaster — 24 million pounds a year — and his mother's private fortune.