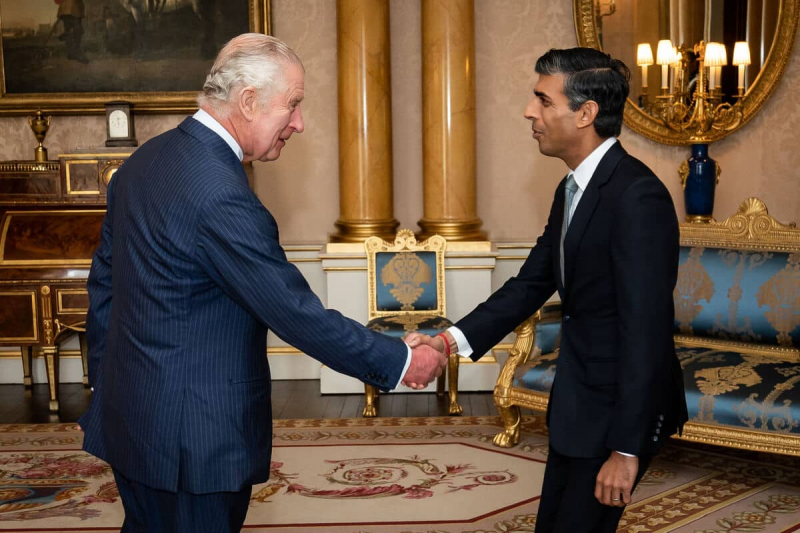 Assigned by King Charles III to form a government, Conservative Rishi Sunak on Tuesday warned the United Kingdom of the “difficult decisions” ahead while endeavoring to send a message “of hope”, in a country plunged into a serious economic and social crisis.

Former banker and Minister of Finance, Rishi Sunak becomes the first British Prime Minister of Indian origin, of Hindu faith, and the first to come from a former British colony. At 42, he is also the youngest head of government in contemporary UK history, after a meteoric rise in politics.

“I will unite our country not with words, but with acts”, he assured, promising to “repair” the “errors” committed under Liz Truss, facing a right-footed desk, contrasting with the spiral of that of his predecessor.

In a serious-toned speech, he explained that he was “not intimidated” by the magnitude of the task. “We will create a future worth the sacrifices so many have made and fill tomorrow, and every day after, with hope,” he continued.

Rishi Sunak reiterated Britain's support for Ukraine in the “terrible war” waged by Moscow, which must “end with success” for Kyiv.

He also said he was 'aware' of the work to be done to 'restore trust', he said in an allusion to the scandals under Boris Johnson, to whom he expressed his 'gratitude', in his first speech before the famous black lacquered door stamped with the number 10.

The latter sent him his “congratulations” on “this historic day”.

Forced to leave after the storm caused by his massive plan of tax cuts, Liz Truss, had preceded him to Buckingham Palace to present his resignation to the king, after a term of record shortness: 49 days.

She wished “all the successes” of the world to her successor, “for the good of our country” and in a plea for audacity in power quoted the Roman philosopher Seneca: “it is not because things are difficult that we don't dare, it's because we don't dare that they are difficult”.

She then went to hand in her resignation to Charles III at Buckingham Palace. The 73-year-old sovereign has entrusted the task of forming a new government to Rishi Sunak, who, unless surprised, should notably retain Jeremy Hunt as finance minister.

Rishi Sunak takes the reins of a country facing a serious economic and social crisis. Inflation exceeds 10%, the highest in the G7. Energy prices are soaring, like food prices. The risk of a looming recession.

He will also have to calm the markets, shaken by the budget announcements of the Truss government at the end of September, since canceled for the most part, in disaster.

Rishi Sunak comes to power in a period of unprecedented instability. He is the fifth British Prime Minister since 2016, when the United Kingdom chose in a referendum to leave the European Union, and the third in two months.

He takes the head of an extremely divided conservative party, after twelve years in power. As the Labor opposition prances ahead in the polls two years from the general election, Rishi Sunak has warned MPs in his camp that they must “unite or die”.

He ruled out early elections, demanded by Labour. But, according to an Ipsos poll published on Monday, 62% of voters want such an election before the end of 2022.

A lifelong Brexiter, who is considered a pragmatic worker, Rishi Sunak will have to government both to give guarantees to the markets and to satisfy the clans of its majority, at the risk of suffering the same fate as Liz Truss. He will also have to detail his plans, after having imposed himself without a program or a vote from the members.

During the previous campaign, last summer, during which he was beaten by Liz Truss, this former Chancellor of the Exchequer (2020-2022) had insisted on the need to fight inflation, calling his opponent's promises of tax cuts a “fairy tale”.

On the immigration, he said he supported the ultra-controversial project, and for the time being blocked, consisting in sending migrants who arrived illegally in the United Kingdom to Rwanda.