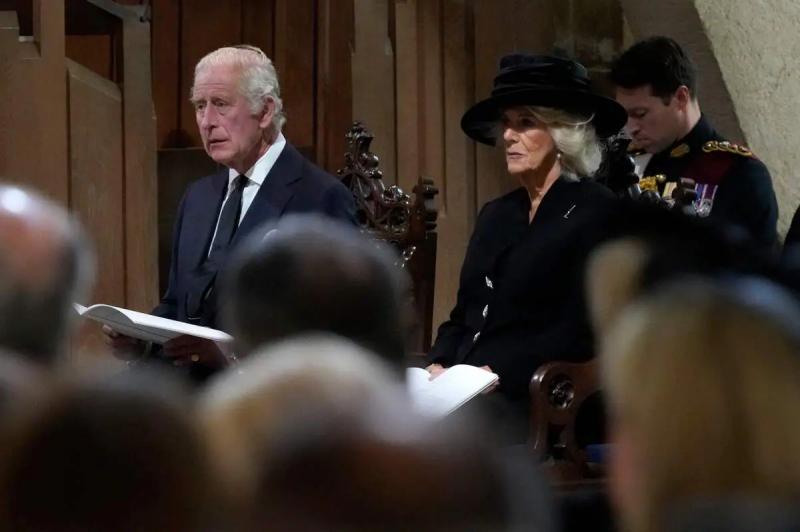 CARDIFF | Charles III visited Wales on Friday, the last leg of his tour as the new king of the United Kingdom, three days before the state funeral of his mother Elizabeth II where hundreds of leaders from around the world are expected.

Two police officers were stabbed early Friday morning in central London, an assault which is not being treated as an act of terrorism by authorities but which has further heightened tension around the challenge security and diplomacy represented by the ceremony scheduled for Monday morning in Westminster Abbey.

Faced with the huge crowds, access to the queue to see the coffin of the monarch in Westminster was suspended Friday morning for “at least for six hours”, announced the government. The waiting time had risen to 2 p.m.

Almost a week after being proclaimed king, Charles III continues his long series of official engagements, and completes in Cardiff a tour of the four constituent nations of the United Kingdom (England, Scotland, Northern Ireland and Wales) , where he attended a church service with Queen Consort Camilla, ahead of a planned reception with local politicians.

Coincidentally, September 16 is also the day Wales celebrates the “rebel prince” Owain Glyndwr, the last Prince of Wales actually Welsh, who in 1400 had risen against the King of England.

The new king, who was himself Prince of Wales of 9 years old last week, does not arrive in conquered territory.

A petition protesting the passing of the title – for some a symbol of English oppression – to the new heir to the throne William rather than a Welshman has garnered over 27,000 signatures.

An anti-monarchy demonstration is planned outside Cardiff Castle. Welsh First Minister Mark Drakeford told the BBC that “this is not the week for this debate to resurface”, although people “have the right to protest”.

Friday morning, several hundred people were also present in front of the castle, hoping to see and greet the sovereign.

“We haven't had a king for so long. I think he'll be fine,” enthused Jack Grimshaw, a 27-year-old bartender who came with his boyfriend.

“If I get the chance, I'll send my condolences and wish him my best wishes,” said Toni Perrott, a sixty-year-old who arrived at dawn from her village near Cardiff, who considers him “well prepared” to reign.

Between the planned protests in Cardiff, the quest for independence in Scotland, community tensions in Northern Ireland but also the republican temptations emerging in some of his other 14 kingdoms, the challenges are considerable for Charles III when he succeeds to his mother.

His first steps as king were considered rather dignified, except for a few public gestures of annoyance much commented on the internet, many waiting to see how he will put on the costume of his mother .

The one who is often described, at 73, as a transitional king preceding his son, the popular William, but also as a modernizer anxious to reduce the sails of a bloated monarchy, will also have to manage family crises.

His brother Andrew has been ostracized from royalty due to a sex scandal and his son Harry, who turned 38 on Thursday, is exiled to California with his wife Meghan and is preparing potentially explosive memoirs.

“Eve of the Princes”

The time is currently at the unit. After marching in line, behind Elizabeth II's coffin on Wednesday through central London, her four children will reunite in their mourning on Friday evening. The king will have received the country's religious leaders at Buckingham.

Charles, Anne, Andrew and Edward will observe a 'Princes' Vigil' around their mother's coffin, which has been on public display since Wednesday evening at the Palace of Westminster. For the occasion, Andrew, though deprived of military titles, was authorized to wear the uniform. The king would have asked that his eight grandchildren also participate.

More than a week after the death of Elizabeth II, the emotion remains considerable.

On Friday, the photos of Prince William and his wife Kate meditating in front of the flowers placed by the public in front of the gates of the royal residence of Sandringham, appeared on the front page of most British newspapers.

In London, the public will be able to parade until early morning Monday in front of his coffin draped with the royal standard and adorned with the imperial crown. Then it will be the end of Elizabeth II's last journey.

Her coffin, accompanied by the royal family but also caregivers from the public health system, will be taken to Westminster Abbey for a funeral. State, the first since the death of Winston Churchill in 1965, in front of 2,000 guests, foreign heads of state, world elite, anonymous people decorated for their associative commitment.

On the other hand, a delegation of Chinese officials was prevented from coming to pray in front of the coffin in Westminster, according to parliamentary sources. A decision which comes after the sanctions imposed by Beijing against British parliamentarians who have criticized the human rights situation in the country.

After a final procession, Elizabeth II will be buried on Monday in the St. George's Chapel in his beloved Windsor Castle, with his father George VI and his husband Philip.

The United Kingdom will stop for this holiday, before returning to , after a parenthesis of collective sadness, the reality of the serious economic and social crisis that is hitting him.

Pope Francis will not attend the funeral of Queen Elizabeth II

< p>Pope Francis will not attend the funeral of Elizabeth II which will take place in London on Monday.

Vatican Foreign Affairs 'Minister', 'Bishop Paul Gallagher, will represent the Pope Francis” during the funeral, the Vatican said in a statement.