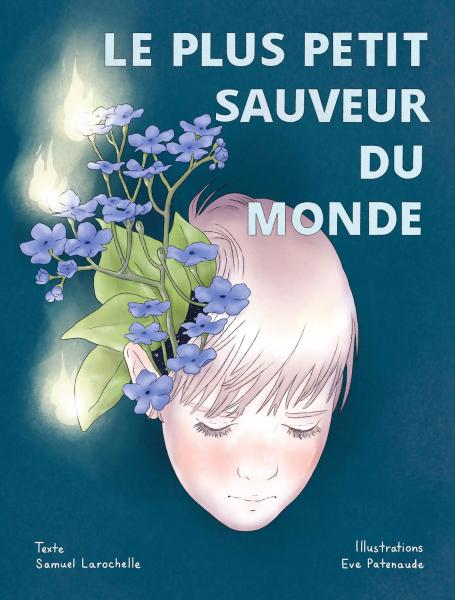 Florent, a very sensitive ten-year-old boy, overhears a conversation between his two mothers. With the words that they exchange, he understands that they hesitate to give birth to another child, because of the current state of the planet… The notions of pollution, social responsibility, global warming are embedded in the boy's head. Forest fires haunt his nights. Are there too many people on Earth? Is he himself too much?

The Quai no 5 collection from Éditions XYZ is beginning to earn a solid reputation as literary masterpieces! After the incredible 2021 album Papier Bulle, signed Simon Boulerice, it is the turn of the book The smallest savior in the world to charm, upset and move children. and great.

Samuel Larochelle's text encourages the reader to have a real reflection on environmental issues, while exploring one of the great concerns of our time, eco-anxiety. < /p>

And what about the illustrations of Eve Patenaude. They are sublime, striking and sweet!

Florent is a hypersensitive boy who perceives everything intensively. Nevertheless, his emotions, his questions and his observations join those of many other children, adolescents and even adults.

Realizing how badly the planet is doing, Florent comes to think that not only should we no longer have new children, but that all parents should have stopped having them before.

Frightened and shaken by all the feelings that take hold of him, the boy withdraws into himself, refusing even to speak to his mothers for days. His joy of living completely evaporates… His parents want more than anything to bring him hope, to transform his eco-anxiety into solutions.

The album The world's smallest savior is a huge hit. The words of Samuel Larochelle jostle us as much as they rock us. Such beauty emanates from each of the pages of the book, even those that reflect the boy's despair, because we guess that he wants to have hope.

Maxime is ten years old. What she loves most in the world? Books and her cat, Curcuma. If she absolutely had to choose, she would opt for her cat, of course! Maxime feels different from the other children. Unlike them, she doesn't like noise. So she plays, in her head, with characters from her favorite books. One day, Maxime notices that someone seems to be feeding the neighborhood cats, in the alley. So she decides to investigate… A touching and lively story, which brings a lot of emotions and action to the reader, and which presents different friendly models. Great album!

All the families in my village

Aria resides in a village where there are only nine houses. These are home to very different families. However, one thing is common to all these houses: they are filled with love! While Aria lives with her two mothers, her neighbor lives alone with his four children. Then there is Lulu, Aria's best friend. When his father was a child, he was in a so-called girl's body. He then chose to match the shapes of his body to the curves of his heart. A magnificent book with dynamic illustrations that pays tribute to tolerance and open-mindedness.

Children's imagination has no limits, but sometimes they get bored, even when they are with friends… What if, by showing their creativity, they invented a completely wacky and fun game? Well, sauerkraut is no longer just a dish that is eaten, for many, accompanied by sausages and beer: it is a very entertaining game that the six children in this album have fun! Presented as “an authentic recipe against boredom”, this work certainly succeeds in bringing smiles and small rays of sunshine, even in the most boring day. A funny, entertaining… and delicious album!

The wolf, the hunter and the hen

Lady nature gave birth to a hen, a hunter and a wolf. She found a place for them all: she placed the hen in the den, the hunter in the henhouse and the wolf in the house. Nothing worked as planned… This all-cardboard presents a story that looks like a traditional tale. The author shows great originality by integrating shapes (round, square and triangle) as well as colors (green, yellow and red) into her story to further the learning of toddlers. Perfect for showing kids how our experiences can uniquely shape us!