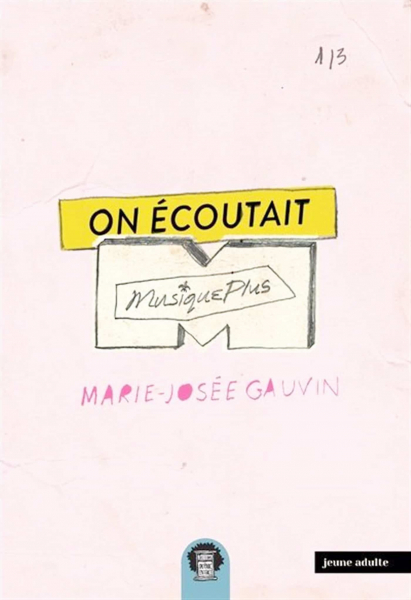 Manu and his friends Catherine, Becca and Sophie are not trying to reinvent the world; they are trying to get through adolescence! One is a semi-repressed rebel, another feels invisible, one would do anything for her girlfriends, and the last is in love with love. To be a teenager in the middle of the 1990s is to love Leonardo DiCaprio as much as the grunge movement and vibrate to the rhythm of the MusiquePlus channel…

In this first part of a trilogy aimed at young adults, author and radio host Marie-Josée Gauvin tackles universal and timeless themes, against a background of music from the 1990s. The four main characters – its narrator Manu and her best friends Becca, Catherine and Sophie – are so tightly woven that nothing could separate them… or almost, for example if two of them are fond of the same guy, but that's also that, adolescence!

These four teenagers are beautiful to see with their contagious enthusiasm, but also their torments which tear them apart inside. They are lucky to have each other. We all need to live and relive this kind of relationship that feels so good, whether in reality or through a literary work as entertaining as this one.

The 1990s were rocked by many sometimes “shady” and inexplicable movements! With her brilliantly chosen and described adolescent anecdotes, the author takes us into her universe full of nostalgia, naivety, love in a friendly sauce and music. Because most of their time, the four heroines are connected to MusiquePlus. Moreover, the title of each of the chapters is that of a popular song of the time, such as Tassez-vous de d'là (Les Colocs) and Break Stuff(Limp Bizkit). The emotions experienced by the characters in these chapters could not be better portrayed than through these songs. Today's teenagers and the great nostalgics can undoubtedly find themselves and find several points in common when reading this book.

Since she was little, Talia has dreamed of the day when she will be 15 years old. At home, in Cuba, the quinceañerais an important passage in the life of a woman. However, once this magical moment has passed, Talia feels like she no longer has a specific goal to achieve. Then, the economic and political situation of his country weighs more and more heavily on his shoulders. A taste of freedom begins to take hold of her, but what price will she have to pay to achieve it? A captivating and poignant first novel for this Cuban-born author who immigrated to Quebec in 2015. A strong and touching story, full of distress, passion and light.

Nic is 16 years old and, when he realizes that his pocket money limits him in his projects, he throws himself head first: he wants to get his first job! This album goes through all the steps necessary for a teenager to find a student job and then be able to manage a budget. Make a CV, be efficient at work, avoid overconsumption (even if for Nic, the desire is strong to have three fishing rods) and plan savings. This is another beautiful book from the Griff collection which, this time, stands out with accuracy and originality to address financial education!

The dead don't all rest in peace… Artemisia follows the teaching in order to become a Gray Sister, a nun responsible for purifying the bodies of the deceased so that their soul can go to the afterlife. If their soul is unable to reach this destination, these deceased will become vengeful spirits that attack the living. Artemisia has no problem with this job, because she prefers to be around the dead rather than the living! But, one day, she finds herself forced to awaken an ancient spirit imprisoned in a relic. This ghost will forever change his life… A certainly unique literary universe, Vespertine is bewitching and captivating, not to say mind-blowing!

Fable T .1: The adventurer of the seas

Fable is the heiress of the most powerful merchant in the Gullets. Her mother died in a storm and her father abandoned her on an island populated by thieves. Fable knows she should trust no one. To meet her needs, she dives into the seabed to extract gems that she then resells. Determined to find her father, Fable must leave the island… The young captain of a merchant ship agrees to let her board, but the adventure that awaits the young woman is most surprising! A great maritime fantasy novel, this book will captivate lovers of this genre.