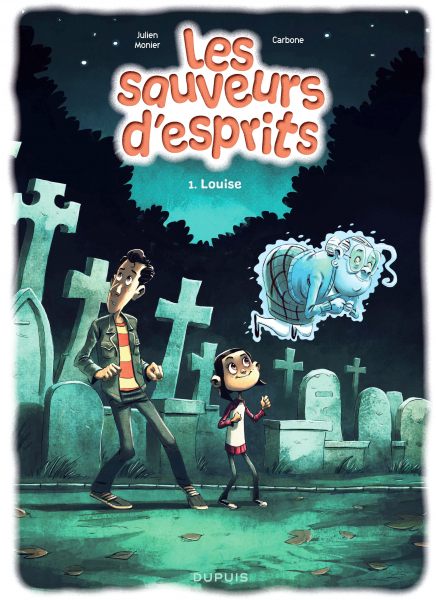 Since the death of their father, Sam lives with his older brother Tim. Sam is often at the cemetery talking to his father or doing his homework. Tim wants her to quit the habit, especially when a social worker believes he's taking bad care of his sister. But Sam realizes she has a gift: she communicates with spirits! She then gives herself the mission of helping Louise, a lost ghost, to find her husband.

Funny, touching and mysterious, this new children's series manages to find the right balance between the paranormal and realism!

Initially, it might feel like this is yet another story of someone who can talk to the dead. However, the Spirit Saviors comic is much more than a ghost story…

It is a human and touching story about attachment; the strong bond between a sister and a brother who have just gone through a difficult ordeal, but whose need to do good around them is stronger than anything.

When Sam meets Louise, the ghost of a lost old lady who was buried anonymously, she does not hesitate for a second to help him find his bearings.

We have the impression that Sam is trying, at the same time, to find herself in her new daily life, this new reality that is life after the death of her father…

Of course, when her brother Tim sees her talking in a vacuum, he refuses to believe that she is talking to a ghost! We could blame him for his lack of openness, but we understand that he is trying to protect his sister.

If Sam is acting too strangely, the social worker will want to separate them, prevent them from living together. Thus, Tim ends up crushing on his pride and decides to play the game, for his sister.

Together, they try to find Louise's husband, who must be worried about his disappearance.

This first installment of the comic strip The Saviors of Minds offers tender, funny and fantastic moments to its readers.

The comforter who had a monstrous craving for candy

Jeanne and her cuddly toy like to sit in front of the large window of their house. There, they can peek at the neighbors! Each of the families seems amusing to them, except the Ogrelets. The mother, father and three sons of this family are super tall and scary. They live in the mansion at the top of the hill, a haunted mansion… This year, Jeanne musters up her courage and knocks on the Ogrelet's door, during her Halloween candy picking. Another adorable story of the comforter that highlights courage and open-mindedness!

Loch Ness, Scotland has its monster, Nessie. Its history is very mysterious, but there is one just as fascinating here, in Quebec! Lake Memphremagog, in the Eastern Townships, is said to be home to the famous Memphre monster, a beast that looks like a huge snake, with the head of a horse. Over the years, many witnesses claim to have seen Memphré or its bumps on its back, on the surface of the water… The “Great Classics” collection allows young readers to discover tales and legends from here and Besides. This collection is frankly a great discovery, ideal for feeding children's imaginations.

What a wonderful, beautifully illustrated book! Madame A's class, is a teacher’s declaration of love to her students. This is the moving, comical and surprising story of a secondary school teacher catapulted into elementary school for eight months. His daily life is filled with sweet moments, but also with striking anecdotes, such as this great fourth year who, from the outset, admits to having drunk a bottle of “kind” 0.7% alcohol, during the weekend! Then, teeth falling on the floor of the class and hugs galore. Besides, that's exactly what this book is: a big hug for the soul!

In West Africa, a majestic tree – a baobab – stands in the center of a village struggling with a terrible drought. A long time ago, this tree fell in love with the earth. He therefore buried his roots there and thus gave birth to a magical story. Now, Amondo, the son of the baobab tree, is the only one who can deliver the inhabitants of the village from a curse of the sun… This book-disc includes a play and seven songs that immerse young readers in the wonderful world of original African stories. A beautiful cultural and musical journey, for the whole family!