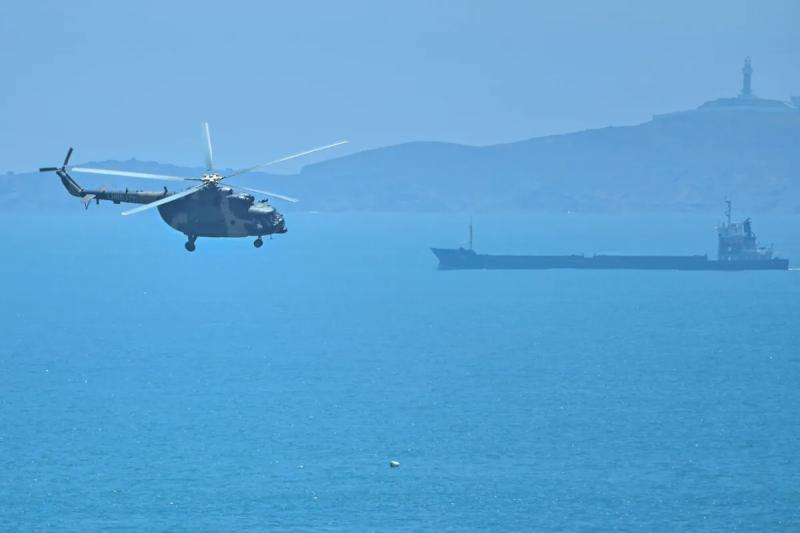 China began its military exercises around Taiwan on Thursday, Chinese state television CCTV announced, the largest exercises ever organized around the island claimed by Beijing.

The Chinese military began Thursday the largest military maneuvers in its history around Taiwan, a strong response to the visit of the Speaker of the United States House of Representatives Nancy Pelosi on the island.

If her trip to this territory claimed by China lasted less than 24 hours, Ms. Pelosi, the highest elected American official to visit Taipei in 25 years, sparked the fury of Beijing.

She insisted that the United States would not abandon the island, which is ruled by a democratic regime and which lives under the constant threat of an invasion by the Chinese army.

Shortly after noon (04:00 GMT ), the military maneuvers began in six areas encircling Taiwan, along busy trade routes and sometimes only 20 kilometers from the Taiwanese coast.

“Exercises are starting” and will continue until Sunday noon, Chinese state television CCTV said in a message on social networks.

“During this period, ships and aircraft must not enter the waters and airspace concerned”.

In Pingtan, a Chinese island located near the maneuvers in progress, AFP journalists saw several unidentified projectiles fired at around 1:13 p.m. (0513 GMT) soaring in the sky towards the sea, followed by plumes of white smoke.

Tourists who were on the seaside, on this tourist island, witnessed the shooting.

Shortly before, military helicopters flew overhead in the direction of the Taiwan Strait .

The Taiwanese army has indicated that it is “preparing for war without seeking war”.

According to the Chinese newspaper Global Times, which quotes military analysts, the exercises are of an “unprecedented” scale because missiles will fly over Taiwan for the first time, with “live ammunition and long-range artillery fire”. .

The authorities of the island denounced “an irrational act aimed at challenging the international order”.

“Some of the areas of China's maneuvers encroach on (…) the territorial waters of Taiwan” , said Sun Li-fang, the spokesperson for the Taiwanese Ministry of Defense.

The ministry said the Taiwanese military fired a flare overnight from Wednesday to Thursday to scare away a drone that was flying over Kinmen Island, located just ten kilometers from the Chinese city of Xiamen.

For Beijing, these exercises – as well as others, more limited, started in recent days – are “a necessary and legitimate measure” after the visit of Ms. Pelosi.

“These are the United States who are the provocateurs, and China who is the victim. China is in self-defense,” Foreign Ministry spokeswoman Hua Chunying told reporters.

The drills aim to simulate a “blockade” of the island and include “assaulting targets at sea, striking targets on the ground and controlling airspace”, according to the official Xinhua news agency.

If the hypothesis of an invasion of Taiwan, populated by 23 million inhabitants, remains unlikely, it has increased since the election in 2016 of the current president Tsai Ing-wen.< /p>

Coming from an independence party, Ms. Tsai refuses, unlike the previous government, to recognize that the island and the mainland are part of “one China”.

Visits by foreign officials and parliamentarians have also multiplied in recent years, provoking the ire of Beijing.

In response, the China of President Xi Jinping, who wants to be intractable on questions of sovereignty, seeks to diplomatically isolate Taiwan and is exerting increasing military pressure on the island.

Organized in the fall, this congress will see Xi Jinping re-elected at the head of the organization for a third term.

However, China has no desire that the current situation escalates, experts tell AFP.

Amanda Hsiao, China analyst at the International Crisis Group think tank, notes, however, that these exercises “represent a marked escalation from the norm of military activities Chinese forces around Taiwan and the latest crisis in the Taiwan Strait in 1995-1996”.

And “by doing so, Beijing indicates that it rejects any sovereignty” of the Taiwanese authorities on the island, she underlines.