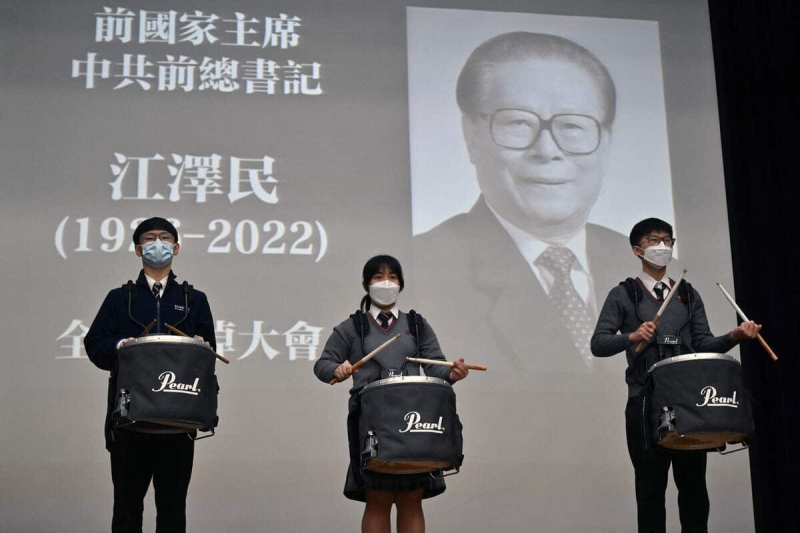 The sirens sounded in China on Tuesday and a three-minute silence was observed in tribute to former President Jiang Zemin, who died at the age of 96 and hailed as a patriot who “dedicated his life” to the Chinese people.

During this day of national mourning, the police made sure to avoid any large gatherings, after the wave of demonstrations against the health restrictions.

The commemorative ceremony, broadcast live on television, then began at the People's Palace in Beijing, with a speech by President Xi Jinping.

“He devoted all his life and energy to the Chinese people, to the struggle for national independence, the liberation of the people, the national prosperity and the happiness of the people,” assured the leader in front of an assembly of senior Chinese dignitaries. , all masked.

In the front row was Jiang Zemin's widow, Wang Yeping, in her wheelchair.

While the authorities have recently been confronted with a protest movement on an unprecedented scale since the pro-democracy mobilizations of Tiananmen in 1989, the figure of Jiang Zemin seems to unify: the architect of China's arrival on the world stage, he is also the one who had been able to restore calm in Shanghai in 1989.

He took power following this episode, accompanying the transformation of the most populous nation on the planet into a world power, which he directed until 2003.

He died on November 30 in Shanghai from leukemia and multiple organ failure, according to state media.

His body was cremated in Beijing on Monday, in a ceremony attended by attended by President Xi Jinping and other senior leaders, according to the state-run New China Agency.

Former President Hu Jintao – whose abrupt exit from the People's Palace in October, during the party congress, had attracted international attention – was also present, according to the same source.

Flags at half mast

All day, flags are at half mast and recreational activities suspended, as are some online video games such as the popular League of Legends, which has announced a day off.

In Yangzhou (south) , Jiang Zemin's hometown, about 100 people gathered in front of his former residence to observe the moment of silence, before being dispersed by the police.

< p>In the port of Hong Kong, hundreds of boats sounded their sirens for three minutes.

Popular with the younger generations of Chinese, Jiang Zemin nevertheless divides the population as to his heritage.

He is accused of failing to address the problems generated by China's economic leap, such as corruption, inequality, environmental impact and layoffs due to state industry reforms.

Under his tenure, the crackdown on political activists also grew fiercer.

“The 'Jiang era, even if it was not the most prosperous, was more tolerant,' assured a user on the Weibo social network, the equivalent of Twitter in China.

“I have heard a lot of criticism from him, but the fact that he has allowed critical voices to exist shows how praiseworthy he is,” he added, as authorities now track down participants in protests against anti-Covid restrictions.

Last Thursday, his remains were flown to Beijing. Xi Jinping was present when he arrived, according to footage from state broadcaster CCTV.

Black armband and white flower pinned to their jacket , the Chinese president and other senior leaders bowed in a coordinated fashion as Mr. Jiang's remains were descended from the plane, his thick-rimmed glasses visible through his glass coffin.

< p>Ever since he was retired, Jiang Zemin was looked upon with fondness by his admirers of the younger generations of China, who called themselves the “toad devotees”, fascinated by his batrachian-like countenance and eccentric mannerisms. .

On Weibo, many netizens commented on his death calling him “Grandfather Jiang”.