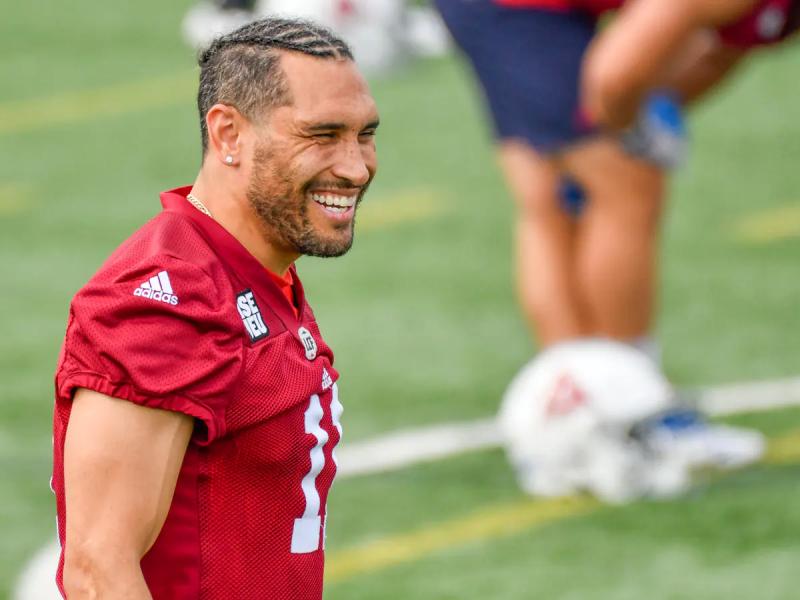 In his first year of eligibility, former Montreal Alouettes linebacker Chip Cox will be inducted into the Canadian Football Hall of Fame, it was announced Tuesday.

The American is part of the 2022 vintage, which will be inducted on September 16 at Tim Hortons Field in Hamilton.

“It validates all the efforts I have made, underlined Cox , Monday, during an interview with the media. To be selected in my first year of eligibility is the icing on the cake.”

The 38-year-old recalled that there was no sign that he would ever find a career that would allow him to be one of the immortals on the circuit.

“I'm a guy who doesn't have got a starting job before I was a senior in high school and I've played football all my life. I was never elected to the all-star teams in college, but I never stopped. I knew that the day I was going to get my chance that I would not be removed from the field.

That's exactly what happened with the 'Als' when he was hired by general manager Jim Popp in 2006. Cox spent his entire career in the Canadian Football League (CFL) in Montreal . He terrorized opposing attacks until 2018, making 926 defensive tackles, 23 interceptions and 32 quarterback sacks. He also caused 28 fumbles and scored six touchdowns.

Four years after his retirement, CFL coaches are still using Cox streaks to show what a strong-end (SAM) linebacker needs to do to excel.

The Columbus native did not begin his career in this position, however, having played his first seasons as a defensive back. It was Popp's plan to use Cox as SAM, but the athlete refused.

“I came from the United States and I didn't understand Canadian football very well yet,” he explained.

In 2009, the former GM of the Alouettes however returned to the charge.

“Jim told me that it was to play in this position that he had brought me to Montreal and that this was the moment when he really needed me there. be. When they tell you that, you have to do it for the team,” Cox recalled.

“He was right, it was the perfect position for me. It's funny, because my freshman year in high school, I told my coach that I wanted to cover the best receivers, but that I also like to blitz.”

“It doesn't was not possible in the football that is played in the United States, but it was in the CFL,” concluded the man whose story is the perfect example of what makes the uniqueness of the Canadian circuit.

It was unanimous among the Montreal Alouettes players interviewed on Tuesday: Chip Cox was an electrifying and intimidating player.

Offensive lineman Kristian Matte rubbed shoulders with the one who will soon be inducted into the Canadian Football Hall of Fame from 2010 to 2018 with the “Als”. Let's say the 36-year-old veteran would rather have him on his team than the other way around, even if it was not a piece of cake to face him in training.

“He was an extremely talented and very athletic guy. It was hard to find him when he was racing towards the line, because he was so fast. It was tough training against him. Chip was a great team player and leader. It's not for nothing that he will be inducted into the Hall of Fame.”

“I remember that in my early years, the opposing offense was at the goal line. He forced a fumble, recovered the ball and scored a touchdown.

This feat of arms occurred in July 2011, against the Toronto Argonauts. Cox scored a major of 108 yards, which is still a Canadian Football League (CFL) record.

De his side, quarterback Trevor Harris never had the chance to play with his compatriot from Ohio. However, he was one of its many victims, since they played at the same time on the Canadian circuit for seven seasons.

“I remember a player who terrified everyone, he was a machine for making tackles,” said the Alouettes starter.

“He was able to come back from very far to defend against passes, even when I was convinced that my receivers were completely free.

At 26, linebacker Brian Harelimana has never had the chance to play with or against Cox. The Montrealer still remembers very well the athlete who electrified the crowd with his performances.

“I remember a guy who was everywhere on the field and one of the best defensive players in the history of the Alouettes. […] The guys who played with him still talk about it, especially Chris Ackie. He had an impact on their career,” said the second-year player.

The 2022 vintage of the Canadian Football Hall of Fame