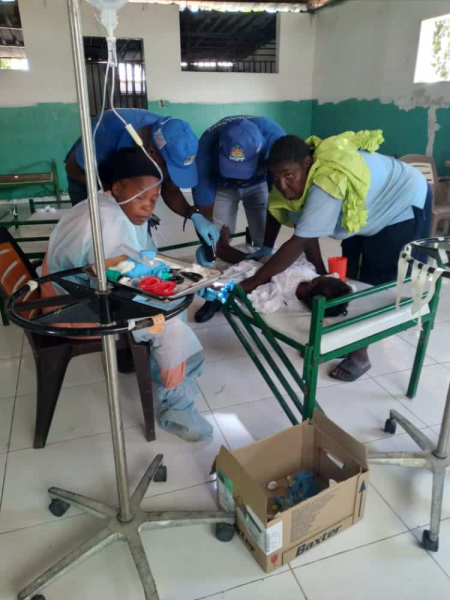 “If only we weren't faced with insecurity or shortages, this outbreak would be less significant, and the response would be more effective,” laments Dominique Saint-Cyr, head of mission for Doctors of the World Canada in Haiti.

The latter coordinates the efforts of the organization's 34 employees to stem cholera, which reappeared in early October in Port-au-Prince after a three-year lull.

The often impossible access to Drinking water or sanitary facilities would have contributed to the resurgence of this scourge.

The World Health Organization recorded this week more than 6,800 suspected cases, and nearly 5,600 patients hospitalized due to cholera. Already, 144 people had died and 6 provinces were affected.

“At the moment, we don't have 9,000 deaths [as in the 2010-2019 epidemic]. But if we don't stop this outbreak properly, it could spread,” notes nurse Andrelle Desravines, head of community activities.

To avoid this worst-case scenario, “Miss Andrelle”, as she is called, supervises 115 community health workers who crisscross the most affected areas in western part of the country.

They raise awareness, accompany the sick, and distribute advice and hygiene kits.

But their task is complicated by the insecurity that reigns, among other places, in the commune of Cité-Soleil, the center of the outbreak and the site of violent clashes between rival gangs.

With all the roadblocks roads and the lack of gasoline, ambulances simply can no longer circulate there, says Mr. Saint-Cyr.

“In Quebec, we don’t have these difficulties. We call 911, a team of professionals arrives and we are evacuated. Here, we don't have those resources to intervene quickly,” he added.

Cholera patients must instead be transported by motorbike taxi to the nearest health center, a solution far away. to be ideal given the weakness of the patients.

“When a patient is transported by motorcycle, the driver himself is not protected”, warns Miss Andrelle.

Highly virulent, cholera is transmitted by the diarrhea of ​​an infected person or via water or food contaminated by their stools.

Dominique Saint-Cyr is especially worried about the fate of children, who make up about half of the sick.

“It's dehydration that kills them when they have cholera, so every minute counts. The sooner we can take care of them, the better their chances of survival,” continues the head of mission.

To make matters worse, the shortage of fuel affects hospitals, whose electricity comes from generators, as much as Médecins du Monde.

Community workers have to deal with violence, lack of gasoline and bad weather.

A week's worth of fuel

“As we speak, we have about 75 gallons of fuel left in our reserves to power our offices and our vehicle,” illustrates Mr. Saint-Cyr.

This quantity is normally used in a week, but can be stretched until mid-December by limiting itself to the maximum.

Slim hope, the Haitian national police managed last week to regain control of the main oil terminal of the country, held hostage by the gangs since September.

“But for the moment, everyone is waiting to see if the distribution will resume its normal course,” said the representative of Médecins du Monde, crossing his fingers.