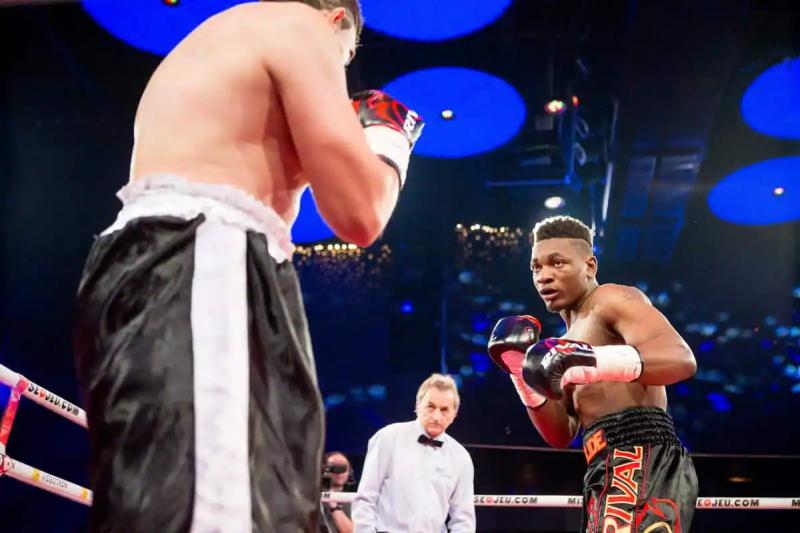 MONTREAL – Patience. In many ways, Christian Mbilli will have to show it, whether in the ring against DeAndre Ware, Friday at the Casino de Montreal, or for the rest of his career.

True to form, the 27-year-old Frenchman showed exceptional form on Wednesday during a training session in front of the media at Marc Ramsay's gymnasium. Leaving nothing to chance, he worked hard during his preparation, but also in the development of a plan.

Mbilli (21-0-0, 19 K.-O.) thus revealed that he wanted to take his time against Ware (15-3-2, 9 KOs). He wants to avoid confusing speed with haste. To achieve this, he intends to listen to his corner, which he has not always done recently.

“Very good training camp, we are finalizing. There are only a few details left, but it went well,” Mbilli began by saying, before listing what he will have to keep in mind during his upcoming evening of work.

“ My concentration, controlling my passion a little. In the ring, I tend to want to tear everything down. Hurt every time, take my time a little. Watch his “jab”; he is an opponent who counterattacks a lot. Listen to the team. I think that if I take all the objectives that I mentioned to you, the fight should go well.

“I think technically and physically, I have everything. Now all that's missing is mastering all that and putting on a good show for the public.”

Mbilli admits it straight away: patience is not its main virtue. Still, he looked downright relaxed for a boxer who has been clamoring for a world title fight for a while now. But like many others before him, he had to realize that the results are not always enough in the world of boxing to shake the hierarchy in place.

“I realized that it's not enough to win and get knockouts. to be world champion. There is also a business and political side. So, I advocate patience. I'm in the right zone right now. I'm well surrounded, you just have to be patient.”

His trainer Marc Ramsay certainly has something to do with it.

“He's a brilliant young man who has taken that on board,” Ramsay said. There are two options in professional boxing: either you complain all the time or you take the opportunity and make something positive out of it. It's [the second option we chose] with Christian.”

Thus, Mbilli understood that it was by becoming a compulsory candidate in one or the other of the federations that he will be able to force his destiny. And he wants to become one in 2023.

To conquer the American public

MONTREAL – Christian Mbilli's rise may not follow the expected curve without some fame in the United States. In this sense, the fight against Ware, broadcast on the ESPN network, seems to particularly motivate the Frenchman.

Two belts will be at stake in this duel. Ware will be looking to reclaim the World Boxing Council (WBC) Americas Continental belt he won in February 2019 by defeating Ronald Ellis and which currently belongs to Mbilli. The vacant World Boxing Association (WBA) International title will also be awarded to the winner.

But more than the belts, it is the visibility related to broadcasting on an American channel that will be the greatest reward for the protege of Eye of the Tiger Management (EOTTM).

“[The motivation] is 100%, he confirmed on Wednesday during a media training. Especially since this is the first fight broadcast on ESPN since the agreement. I have a burden on my shoulders; I really have to be spectacular. The determination is there, the energy is there, everything is there. All that remains is to do the work.”

Being spectacular is one thing, but sticking to the previously established plan is much more important in its progress. Mbilli does not rule out a small visit to the floor for Ware, as was the case with his last opponent Nadjib Mohammedi. However, the stars will have to be aligned.

“Obviously, a K.-O. is spectacular, I would like to fully reproduce the same thing, conceded Mbilli. But unfortunately, each fight has its characteristics. I concentrate on my technique, on the instructions of the “coach”. I want to win round by round.”

“But it is certain that at the slightest opportunity he will give us, we will seize it to knock him out.”

MONTREAL – Compulsory candidate for Marie-Ève ​​Dicaire's belt, Mary Spencer intends to use all means to get the attention of her rival, who is instead eyeing a title unification bout.

Recently turned professional, Spencer (6-0-0, 4 KOs) is winning at a staggering pace. His last was a K.-O. in the first round against Chris Namus, one of four boxers defeated by Dicaire during the defense of her IBF super-welterweight belt. The champion won by unanimous decision on December 1, 2018.

This Friday, Spencer will again face a recent opponent of Dicaire. This time, she will try to do better than a K.-O. in the seventh engagement against Cynthia Lozano (9-1-0, 7 KOs). It was against the latter, in December, that the Quebecer regained her title, vacated by Claressa Shields when she moved up to middleweight.

“I'm going to be completely honest and say that [le K.-O.] is absolutely the goal,” Spencer admitted on Wednesday in Montreal. If I want to have a chance for a title fight, I have to do better than the world champion. That was my goal in the last fight and this time it's the same. The champion knocked her out in seven rounds and my goal is to top that.”

If the goal keeps Spencer motivated, it doesn't. Nevertheless, the opponent who will appear before her on Friday at the Casino de Montréal seems destined to bite the dust.

“I watched the fight [against Dicaire]. I said to myself: is this a world championship fight? not a very good defense, but she has a lot of heart. I feel like if I let my shots go, I'll find the target pretty easily. We'll see.”

So she wins, she will claim the WBC Silver and WBA International titles in his first career belts.

The final three fights on this Eye of the Tiger Management card will be featured Friday night on the TVA Sports airwaves.