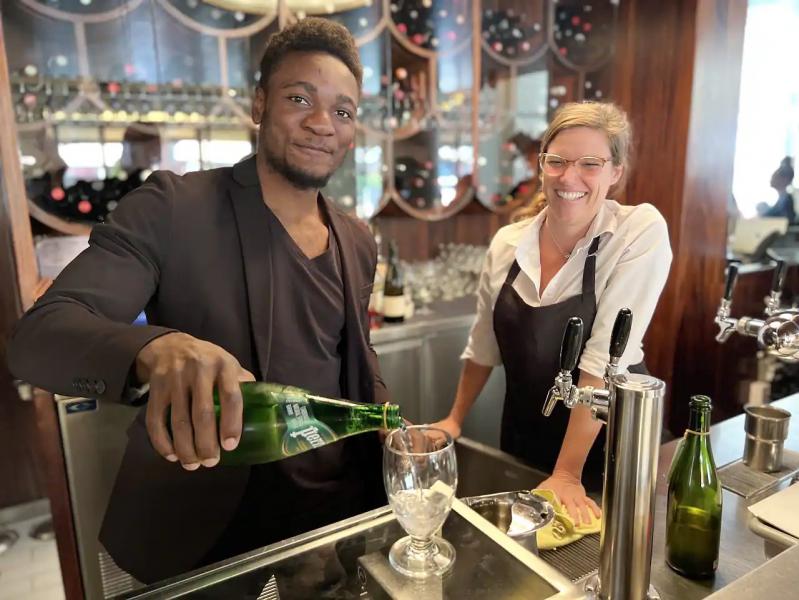 Must also say that Christian MBilli is one of my favourites. As an athlete and as a human. He is bright, cultured and articulate. Able to talk boxing and business in the same quarter of an hour. As he was well brought up, he knows how to be discreet even when an impatient columnist has to play photographer in a crowded Leméac on a Friday noon.

And then, it must be said that it had started on a whirlwind. THE question has been itching since Stéphan Larouche threw the phrase at me when speaking of Christian MBilli: “He's a one-dimensional boxer”, said Larouche during a conversation.

It's an epithet that can be murderous in boxing. It means that a boxer cannot adjust, that he only knows one way to fight. We could have said it of Artur Beterbiev. But we would have been sorely mistaken. Against Joe Smith in New York, Beterbiev showed he was a fine boxer and a formidable strategist in the ring. Before demolishing Smith in less than two rounds.

Is Christian MBilli one-dimensional? Seems short-sighted. He delivered 21 fights, won them all, including 19 by knockout. All in the same style. That of a very strong, sturdy, solid and aggressive boxer, imposing his way of doing things in the ring. A tank: “But that doesn't mean that I couldn't adapt in front of a very high caliber opponent. I protect myself very well, I have a high guard and, honestly, I never got hurt during a fight. Except sometimes by a blow to the body. But I have what it takes to take it well,” he replies without even a hint of annoyance.

“But during sparring, Marc Ramsay makes me work on aspects of a fight that I I must be ready to cross. He also does it with Artur Beterbiev,” added MBilli.

In New York where he is preparing Arslanbek Makhmudov for September 16, Ramsay adds his two cents: “Do you want to know? Christian has all the tools in his trunk. But he doesn't have to take them out when not necessary. He is already ready for the big fights. In the gym, I would say he is even worse than Artur Beterbiev in his determination to push his limits in training,” says Ramsay.

PERRETTE AND THE MILK JAR

MBilli faces DeAndre Ware in the final at the Casino next Friday. In fact, it should be just one more step to climb towards a world title fight. And maybe, like MBilli's eyes wide open dream, the millions against Canelo Alvarez. The unified champion of the four international federations.

Moreover, it is not very long that the imagination takes all the place. World champion, a few million, sweet dreams like buying a restaurant like Leméac, welcoming customers, managing his business, then investing in real estate, he has already freaked out his first condo to buy a second, maybe have a small hotel…

His eyes are shining.

I talk to him about La Fontaine's fable… Perrette and the milk jug. Perrette went to the market with a jug of milk on her head. With the profits from the milk, she was going to buy hens, sell the eggs, buy a calf… she is distracted by her dream, clings to her feet and her vase breaks on the stone of the path.

< p> Antonin Décarie, who had just joined in the conversation, quickly took the opportunity to bring back the fundamental rule for any boxer progressing towards a world title: “You have to concentrate on the next fight. It's always the most important thing.” MBilli took the message and replied with a smile: “I know… the focus, the focus”.

At one point, we disturbed everyone in the restaurant to take the pictures, Christian MBilli met Ronald Corey, the former president of the Canadiens who seemed to me to be in really good shape, then we resumed the talks. Before we sat down, I just pointed a finger at the boxer's abdominal muscles. It's so hard to break a nail.

-“It's reminiscent of Jean Pascal.

— It's probably genetic. I have a fast muscle fiber that I learned to make tough.

“How do you explain the terrible power of Artur Beterbiev?” Seems to me he's not that impressive?

— Artur, it’s boxing bodybuilding. Even his training is different. When we saw him wielding hammers, it was special. I don't know how he was able to develop this power. You may have noticed, but Artur literally smashes his opponents. He breaks their courage and their resistance. They end up refusing to continue. Me, I would say that it is more a bodybuilding of sportsman. To sprint. Soccer player.

— Marc Ramsay says you're even harder at training than Beterbiev?

— That, I don't know. But when I was fifteen, I dreamed of being a professional athlete. I wanted to be able to train every day. I'm doing it now. I like training. It's not pain, it's pleasure. Pushing your limits, preparing for the unexpected, it’s inspiring”, replies MBilli.

MBilli finds himself third contender for the title of Canelo Alvarez in the WBC. An enviable position. Still at 168 pounds, Erik Bazinyan is 5th WBO, 9th WBC and 5th WBA. But Bazinyan has just lost his father. He is currently in Armenia and is barely recovering from the shock: “He was his father, his business partner and his best friend. The shock is very hard. And it has a final on October 27. It’s not easy,” says Antonin Décarie.

Camille Estephan is even more direct. Both men are in a very busy division. Canelo Alvarez is the unified champion of all associations. We find David Benavidez, Caleb Plant, John Ryder and other big names: “We believe that Christian is more ready to face the big names in the category. He has a slight lead over Erik Bazinyan and we want to have the chance to work a little more on Erik's progress”, explains Estephan.

Check out the list of prospects on the global leaderboards. It's mouth-watering.

As Richard L'Écuyer would say, it's worth an alto saxophone solo…

Christian MBilli shows the opinion of an anti-doping test required by the Paris office of the World Anti-Doping Agency, to which he must submit.

If Christian MBilli had not shown me the proof of his story, I would have had doubts. What he said reminded me of the happy days when the guy from Garda waited at the door on Saturday noon for me to get out of the bath so he could confirm that I was doing my quarantine at home. And that life was sweet and beautiful in the evening with the curfew.

Christian MBilli is French. Still, at least. So it is the Paris office of the World Anti-Doping Agency that is responsible for him. Maybe because he's black, maybe because he's endowed with exceptional bodybuilding and muscle fiber, the French agency has his eye on him. As Health Canada would say, we are watching over him.

“Every three months, I must send the agency the address and a time when I will be available for an unannounced test. I send them my home address at the condo and the time between 5 and 6 am. If I sleep at a friend's house or elsewhere, I have to let them know. It's been three years and they've been to Canada three times for testing. Every time I go back to France I have to tell them where I am and they tested me at least three times. That’s not counting the tests for VADA, which are usual in the boxing world,” explains Christian MBilli with a resigned air…smiling.

In any case, there is no choice. He has to be clean and he has to get up early.

And above all, it's reassuring for a jealous future blonde.