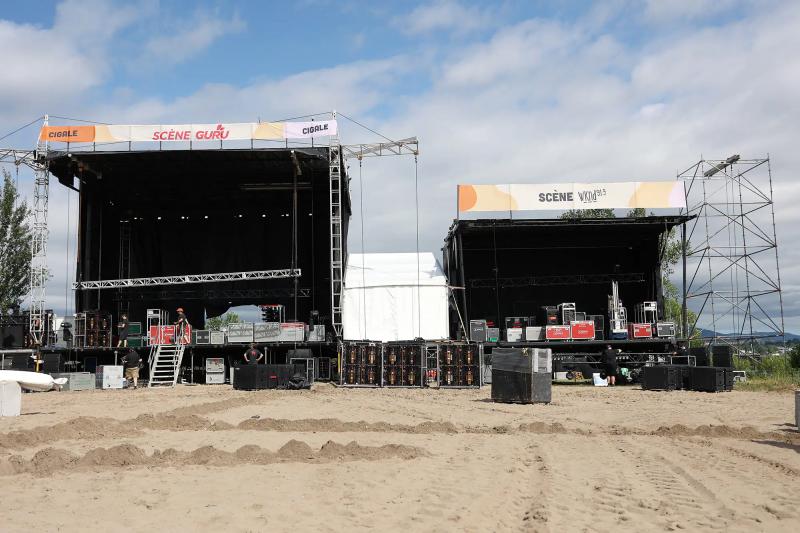 The two scenes are present on the beach and along the river. Yesterday, a few hours before the launch of the very first edition of the Cigale event, the Beauport bay site was taking shape.

The recreational vehicles that will serve as lodges for the artists who will take to the stage on Saturday and Sunday had just arrived. The tower that will house the control room was being erected. Concessions where you can drink, eat and offer all kinds of services were taking shape.

General Manager of Gestev, the entity behind the Cigale event, Gabriel Fontaine-Leclerc confirms that everything will be ready for the opening this afternoon at 1:30 p.m. A total of 300 employees work to present this music, food and California-style beach.

A bar ready to welcome festival-goers.

“It was important for us not to close the site during assembly and allow users to have access to all the facilities. We did it in sequence and zone by zone,” he said yesterday morning during a visit to the site.

The two scenes, side by side, rest on a grassy section located near the beach and the river. Spectators will have both feet in the sand.

A project that began in 2019, it was only this year, after two pandemic summers, that the event was able to take shape.

“Flo Rida's show, presented in 2019 was a kind of pilot project that allowed us to test this formula. We had to adapt the plans we had on paper a bit, but the Beauport Bay teams were involved from the start of this project,” he pointed out.

On the site, there will be seven bars, nine food concessions, including street trucks and three pop-up shops. Nautical agents will monitor the river and those who want a dip.

With warm weather expected Saturday and Sunday, two water stations will be in operation. Spectators can bring plastic containers and bottles to fill them. Glass bottles are prohibited. The water sold on the site will be offered in recyclable glasses. A cloakroom area will also be in place.

Solstice ticket holders will have access to an exclusive area, inside the service pavilion, where there will be a bar, a food offer and toilets.

“Music is the major element of Cigale, but there is also something else”, referring to the nautical devices that will be offered for rental, like everything found on the site”, explained Gabriel Fontaine- Leclerc.

The bay of Beauport will be accessible only to Cigale ticket holders during the days of Saturday and Sunday.

Two-day passes are on sale for $130 on cigalequebec.com and on the site at the box office. Daily tickets are also available at a cost of $80.

How to get there

The Baie de Beauport site will not be accessible by car during the two days of Cigale. You can get there on foot, by bike, skateboard and inline skates.

The price is $3.75 in cash for one passage. Tickets can also be purchased for $3.25 on the RTC's Nomade payment application.