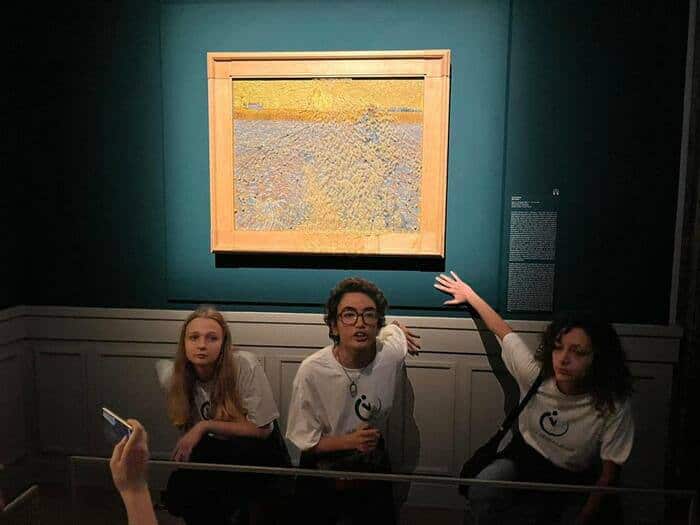 Environmental activists sprinkled soup on a glass-protected Van Gogh in Rome on Friday to draw attention to climate change, an action immediately condemned as a “despicable act” by the Minister of Culture.

“The sower”, a work dating from 1888 showing a peasant sowing his field with a huge sun in the background, is displayed behind glass as part of an exhibition dedicated to the Dutch painter at the Bonaparte palace on the Place de Venise, right in the center of Rome. The painting was not damaged.

“Attacking art is a despicable act that must be strongly condemned,” Italian Culture Minister Gennaro Sangiuliano said in a statement. “Culture, which is the basis of our identity, must be defended and protected, and certainly not used as a megaphone for other forms of protest”.

According to the climate group “Last generation” (“Last generation” in French), this action carried out by four individuals is “a desperate and scientifically based cry that cannot be equated with simple vandalism”.

“Nonviolent direct actions will continue until citizens get answers from their governments on their demands to stop gas and coal and invest in at least 20 GW of renewable energy,” the group said in a statement. .

A video shot inside the exhibition shows two young women throwing a liquid substance in the direction of the painting. Another woman then joins them and all three stick their hands on the wall of the room amid cries of indignation from visitors.

It is the latest such action by climate activists, after famous works of art were targeted in several cities across Europe.

Environmental activists have also stuck on the glass protecting Johannes Vermeer's 'Girl with a Pearl Earring' in a museum in the Netherlands and others threw soup on the one protecting Vincent Van Gogh's 'Sunflowers' in the National Gallery in London .

“The sower” is one of the fifty or so works by Van Gogh on loan from the Kröller Müller museum in Oterlo in the Netherlands for the exhibition dedicated to the painter in Rome, which took place opened on October 8.

Contacted by AFP for details of the activists' action, the exhibition's organizing company tion, Arthemisia, did not immediately respond.