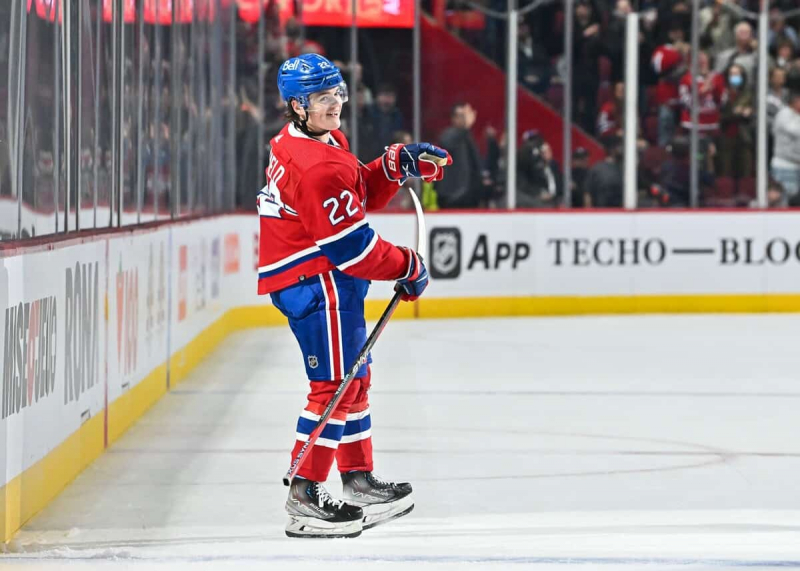 Cole Caufield has already scored seven goals in nine games. We thought if he scored 30 or 35 this year, that would be great. There, he is on a rate of 60 goals and I believe that there is no ceiling in his case.

Since the good years of Stéphane Richer, I do not remember having seen a Canadian player with the potential to score 50 per season and when I see the complicity that exists between him and Nick Suzuki, it's really encouraging.

The two complement each other wonderfully. Caufield allows Suzuki to prove that he is a good captain, because the latter never hesitates to pass the puck to him. Even when he is in a good position, Suzuki sometimes sacrifices a shot in favor of a pass to Caufield. It's both smart and generous. That's how you develop chemistry.

Even in defeat, Canadiens fans can finally see a show and dream of a dominant formation, one day, at the Bell Centre.&nbsp ;

Caufield is a mini-Ovie! He reminds me of my former teammate Alexander Ovechkin in many ways. First and foremost, both love scoring goals and it shows in Caufield's smile. These are guys who want to score again and again.

They throw from everywhere and they can score from anywhere. They never have enough goals, whether in training, warm-ups or games.

Caufield is developing with Suzuki this synergy that I saw in Washington between Ovechkin and Nicklas Bäckström. I was their goalkeeper and even during games there were times when I turned into a fan. I loved seeing them together.

They didn't score all the time, obviously, but they made some breathtaking plays. It was absolutely beautiful. After the game, win or lose, the spectators got their money's worth. I see the same thing in Montreal and we can all exclaim: “Finally!”

I feel like Caufield learned a lot last year. It was the crossing of the desert before it hatched in the second half of the season. He understood what he had to do to succeed. He still has a lot to learn, but scoring goals is in his blood.

Speaking of chemistry at the Canadian, it's not limited to Caufield and Suzuki. The team shows a lot of character and what I like is that no matter what the coach decides, everyone seems to accept their role, including the veterans.

This It wasn't encouraging to see the Canadiens hit the road after two hometown losses to the Stars and the Wild, but Martin St. Louis' men did score wins in Buffalo and St. Louis.

< p>St-Louis owes nothing to anyone and is making the necessary adjustments. He gets to know his players and the way he manages his goalkeepers is a reflection of how he leads. I wonder if we won't have a fight in net in a while, because Samuel Montembeault is progressing.

I said I wanted to see a little more aggressiveness from him and if it didn't come verbally, at least it shows in net. He shows great confidence and unlike last year, he does not allow this famous goal too much which undermines the morale of a team. We feel that he has earned the respect of his teammates.

In short, we see a lot of positives so far.

I'm really happy for Samuel Poulin, who had his baptism of fire in the NHL with the Pittsburgh Penguins last week. I knew him when he was very young because I played with his father, Patrick, and we always kept in touch. Pat was my roommate on the road in his last season. He can be proud of his guy, to whom I wish a very long career.

Talking about the wacky situation of the Arizona Coyotes on TVA Sports, my former coach Michel Therrien threw a cold shower on those who are still hoping for the return of the Nordiques to Quebec. He doesn't think he sees that in his lifetime, he said. In my opinion, it will not happen under the era of Gary Bettman, but he will be forced to retire one day. Maybe things will change at this time and I hope so. The Canadiens-Nordiques rivalry marked my childhood and I would like to see it again.

Marc-André Fleury set a new mark, this weekend, by signing a 62nd career shootout victory, thus passing the former point guard, Henrik Lundqvist. It certainly does not equal a Stanley Cup, but Fleury can be proud of him. I admire these records which are linked to the longevity of an athlete and at 37, Fleury is in admirable physical condition. Another record belonging to a Quebec goaltender.

Looks like Alexander Ovechkin sets new records every month. This time, he's taking on a legendary Gordie Howe mark of 786 career goals with the same team, the Detroit Red Wings. Ovie, who is very proud to be a “Capital”, has 784.