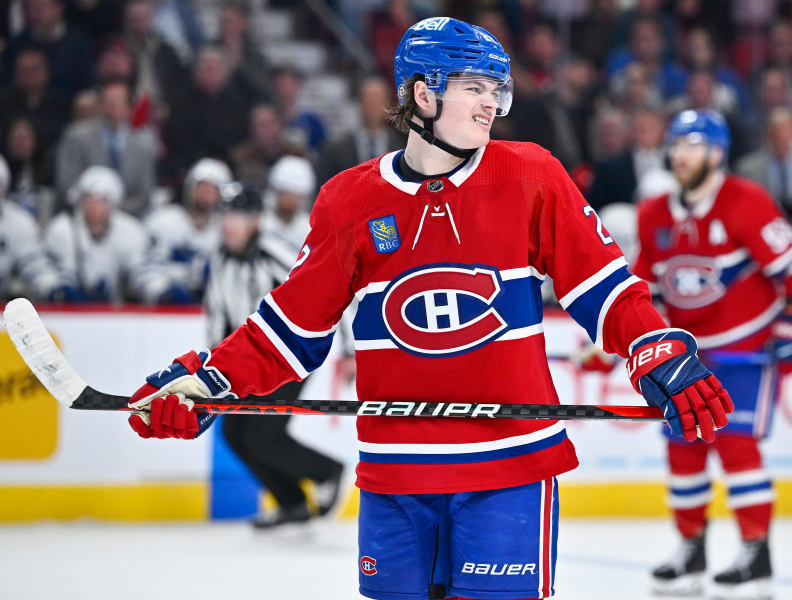 Nick Suzuki is in the first year of an eight-year contract that will earn him a total of $63 million, an average of $7.875 million per season. He is currently the highest paid player in the organization, ahead of Brendan Gallagher ($6.5 million). That will change soon.

Not for Suzuki, but for Gallagher. In the very near future, it is Cole Caufield who will join Suzuki at the top of the Canadian's highest paid players.

The young Habs sniper is finishing the last year of his entry-level contract and we can expect a considerable salary increase in his case.

I have the impression that the new management of the Habs intends to use the same model as in the days of Serge Savard: the best player must be the best paid, and so on.

Can Caufield hope earn more than Suzuki's $7.875 million annually? It's to do. On the other hand, it is not impossible that it is considerably close to this amount.

The team's first game, Wednesday against the Toronto Maple Leafs, proved what we already knew: the Suzuki-Caufield duo is the present and the future of the Canadian.

Suzuki s' proves quite a choice as team captain. Despite a difficult camp, due to an injury, he already stood out at the start of the season.

Those who know me know that I am a fan of the pass in a two-on-one situation and Suzuki does it wonderfully. That's good, he has the perfect client to receive her in Caufield.

What a maverick he is, you have to admit. His ability to place the puck regardless of the space left available by the opposing goaltender makes him a candidate to score between 30 and 40 goals per season. Scoring goals cannot be learned. As Martin St-Louis said after Wednesday's game, Caufield does just that, score, whether in games or practices.

You have to get along with him long term and thus secure the explosive young duo for a long time.

Speaking of contracts, the Habs are stuck with several of their veterans. This column was written before we knew the outcome of yesterday's game, but judging by the one against Toronto on Wednesday, some of them are on a mission to prove their worth for their next contract. This was particularly the case of Sean Monahan.

We feel that the center player wants to prove that he is better than what he has offered in recent years. On Wednesday, he played a strong game and we felt he was dedicated to the cause.

I would like to see the same from Jonathan Drouin.

In his point press release on Wednesday, general manager Kent Hughes assured that he was still part of the plans. To be continued, but the Quebecer must be on a mission, to prove that he can still help the team win.

Aside from Wednesday's game, it was definitely the welcome that Montreal fans gave to Carey Price that caught my attention.

The goalkeeper captured the imagination of Canadiens fans and they let him know on Wednesday evening. By applauding him in this way, they kind of said to him: we don't forget you.

Anyway, finally, here we go. It will be a long season, let's not get carried away too quickly. But there are positives to build on.

I said it and I'll say it again: I love Juraj Slafkovsky. I thought in his first NHL game on Wednesday he was solid and didn't look intimidated or nervous. After the game, Richard Zednik, who was visiting Montreal, compared him to a young Jaromir Jagr. Please calm down! Yes, he is a hockey player. Yes, he has a lot of qualities that make him very successful in the NHL. But can we let him be himself without comparing him to one of the best players in history? Let him play, let him alone with the mistakes he will make because, yes, he will. And, above all, let him develop in the National Hockey League. I don't want to know anything about seeing him go to Laval. He will learn a lot more on the big circuit.

McDavid on a mission

Connor McDavid picked up where he left off last year. In his first game of the season, the Edmonton Oilers captain scored three goals and added an assist in a victory for his team. But the individual stats, I'm convinced McDavid couldn't care less about. It is not the counters championship that he is aiming for this year. Many see the Oilers stepping up to the next level this year and being serious Stanley Cup contenders. Clearly, that's what McDavid is aiming for.

The pre-game presentation, Wednesday night at the Bell Centre, was well done. Some found it a bit long, and I can understand them. The observation that I made while listening to the presentation of all the members of the organization is: “But there are so many people in the organization! I didn't know hockey was made so complicated. We were presenting people with songs that I had never heard before. Well, I'm a dinosaur, someone from the old school, you might say. Still, we are a long way from the time when I had no assistant with me behind the bench and I was asked to win, at all costs! Good for the Canadian, he has the means to do it. I'm not sure that's the case anywhere in the league, talk to the Arizona Coyotes…