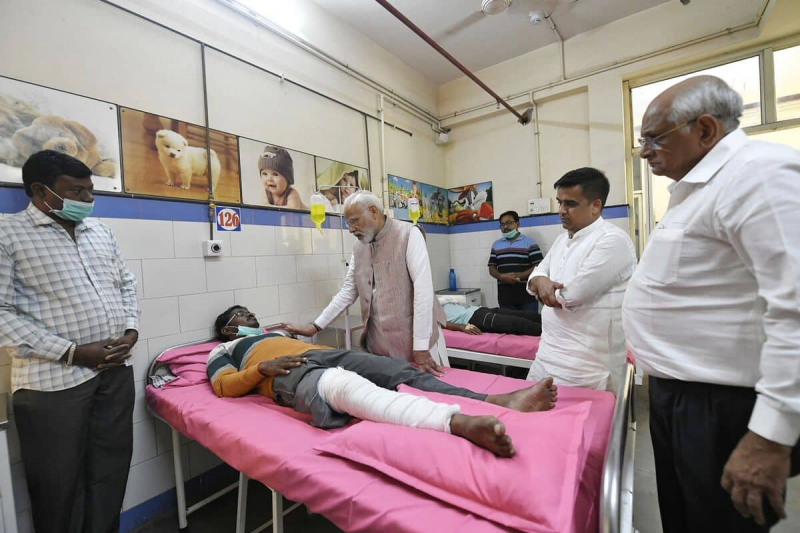 MORBI | Indian Prime Minister Narendra Modi visited the city on Tuesday where more than 130 of his fellow citizens were killed in the collapse of a newly renovated pedestrian bridge.

Under the eyes of the Prime Minister who came to meditate, rescuers on board inflatable boats continued to maneuver and dredge the bed of the river, search operations continuing, two days after the disaster in Morbi, located 200 kilometers east of the river. west of Ahmedabad, the main city in the state of Gujarat where Mr. Modi is from.

The death of 134 people in the collapse of the bridge, including 47 children, has been confirmed, Rahul Tripathi, police commissioner in Morbi, told AFP on Tuesday morning.

A previous report, which gave 137 dead following a mix-up on Monday, was revised downwards.

“We have not yet ended the search operations, because we fear that there remains victims whose relatives do not know where they are and have not yet contacted us,” he explained.

Authorities have put the number of people celebrating Diwali on the bridge at 500, dating back to colonial times when the cables supporting it suddenly broke.

The bridge had just reopen to the public after several months of renovations.

On Sunday evening, according to CCTV footage, the structure swayed before giving way, throwing part of the crowd into the river.

< p>“We found the bodies around four in the morning. My daughter Mahiya had her head in the mud, people went to get her by boat,” Pathan told AFP on Tuesday.

“The police and the administration have put two hours to launch the rescue operation (…) The authorities were useless,” he lamented.

Chinese President Xi Jinping in turn sent his “deep condolences” on Tuesday to the families of the victims in a message addressed to President Drupadi Murmu and Prime Minister Modi.

Renovations to the bridge are said to have been carried out by the local group Oreva, whose expertise includes clocks and electric bicycles.

Last Wednesday, the day of the reopening of the bridge to the public, Jaysukh Patel, president of Ajanta Manufacturing, a company of the group, said that the bridge could easily hold another fifteen years.

Sandeepsinh Jhala , at the head of the municipality of Morbi, indicated on Monday that no certificate of conformity had been issued before its reopening to the public.

Monday evening, the police announced the arrest of nine people, charged with manslaughter, including two directors of Oreva, two subcontractors and also two sellers of access tickets to the bridge, accused of having sold too many. and thus causing the bridge to be overloaded. the press a senior police official, Ashok Yadav.

“As the investigation progresses, the names of other people associated with the Oreva group will also be arrested,” said Mr. Yadav.

He added that a Special Investigation Team (SIT) has been formed to investigate the maintenance and structural safety aspects of the bridge.

At the Morbi crematorium on Monday, Puneet Pitroda, a 35-year-old textile trader, was mourning the death of his brother and sister-in-law.

“The authorities are fully responsible of this tragedy,” he told AFP, “they allowed hundreds of people to gather on this bridge which could only accommodate a limited number”.

< p>And to add: “we will never forget this night”.