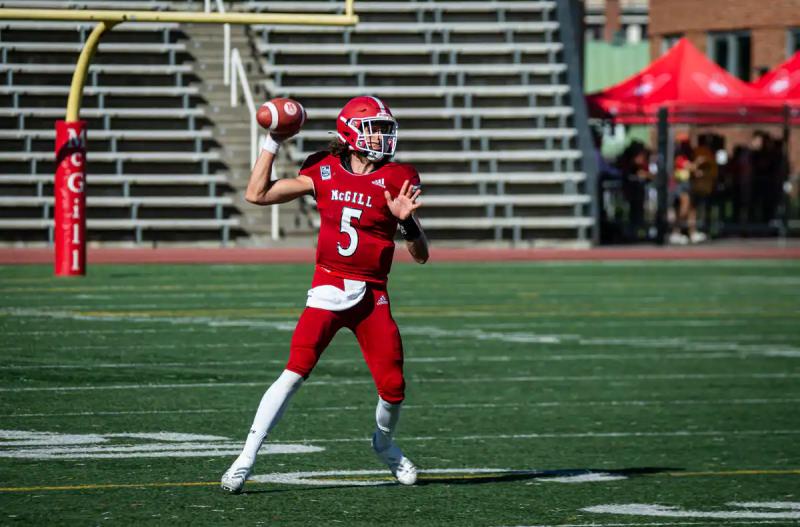 Although the McGill University Redbirds are last in the Quebec Student Sports Network (RSEQ) rankings, the University of Montreal Carabins (UdeM) will have to carefully monitor the actions of the team. 'Éloa Latendresse-Regimbald, Saturday.

In recent seasons, few first-year quarterbacks have looked as promising as this Montreal pivot. The 6'4″ colossus has been talking about him for a long time, even before his very successful stint at Cégep Vanier.

“He is a player who, in his first three games, has shown great skills. We all knew him in Quebec because he had a great college career, and even before that, explained Thursday the head coach of the Carabins, Marco Iadeluca. He is a very explosive player, what is called a “dual threat”. He is as dangerous with his legs as his arm. If you blink for a second, he's going to make you pay.”

Defensive back Kaylyn St-Cyr is also a veteran of the Vanier program, but he didn't have the opportunity to play with Latendresse-Regimbald. The Blues veteran is still close to this school and the new Redbirds quarterback has become a friend.

“During practices, we often compare him to Lamar Jackson, because he is able to do a lot of things by passing and by running. It's part of the strategy with which we will approach the game,” said St-Cyr.

McGill University hasn't won any of its first three duels. At home at Stade Percival-Molson, his players will be starving. It's only a matter of time, according to many, before the Redbirds become as big a threat as the Carabins or the Université Laval Rouge et Or.

“I think this year, the league is so much more balanced. All teams have great quarterbacks. It's the best vintage of quarterbacks I've seen since I've been in the Quebec conference,” said Iadeluca.

And the defeats, although repetitive, will not affect Latendresse-Regimbald, according to his former teammate Jhonathan Mutombo, now a member of the Blues.

“He really is a very competitive guy, who is never going to give up. When we played Vanier, even if we lost a lot, he was always the one who led the team. He was never discouraged,” assured the 20-year-old, who plays on the defensive line.

“Éloa is performing much better than expected in his first university season, added Mutombo. Just the fact that he is there will attract players to McGill. The next seasons, they are going to be much stronger than before.”

The Carabins defensive unit is one of the best in Quebec this season and a challenge like that of the McGill pivot does not scare the players. UdeM, which has only one offensive touchdown in its last two games, could also try to revive offensively against a team that has already allowed 100 points in three games.

Jhonathan Mutombo will be patient

A teammate of Éloa Latendresse-Regimbald with the Cégep Vanier Cheetahs for three years, Jhonathan Mutombo also had the chance to receive an offer from a university team after his college career. The defensive lineman is still waiting for his first opportunity with the University of Montreal Carabins, but he will be patient.

There is no point in going too fast for the 20-year-old. The defensive unit of the Blues is already very strong, which allows Mutombo to continue his learning in training.

Last year, he led the Collegiate Premier League with 41.5 tackles, including 21 for loss of ground. He is highly regarded by Carabins head coach Marco Iadeluca, who has yet to send him into the fray.

“I live it very well. I know that the University of Montreal is a very reputable establishment, with very good players. I was not going there to make my place directly, but more to learn and become the best version of myself. I think that since I've been here, I've grown as a player and I've become much stronger than before,” Mutombo assured on the line on Thursday.

For defensive back Kaylyn St -Cyr, each player is important, regardless of their role in the team. Also a Vanier College alumnus, the third-year veteran can draw on his wealth of experience to help his teammate.

“The important thing is really to support him and tell him that it's part of the process. If I compare his situation to mine, in 2019 I had not played much. There are quite a few guys who, despite their talent, can go through this,” explained St-Cyr, who is gradually taking the 6’3” and 220 lb colossus under his wing.

< p>“I get on really well with him. He has a lot of talent and great potential. He needs to be reminded not to give up. We all go through it a lot,” he reiterated.

Mutombo believes he will have playing time by the end of the season, but he did not want to s spread on the subject. It will now be up to the coaching staff to decide.