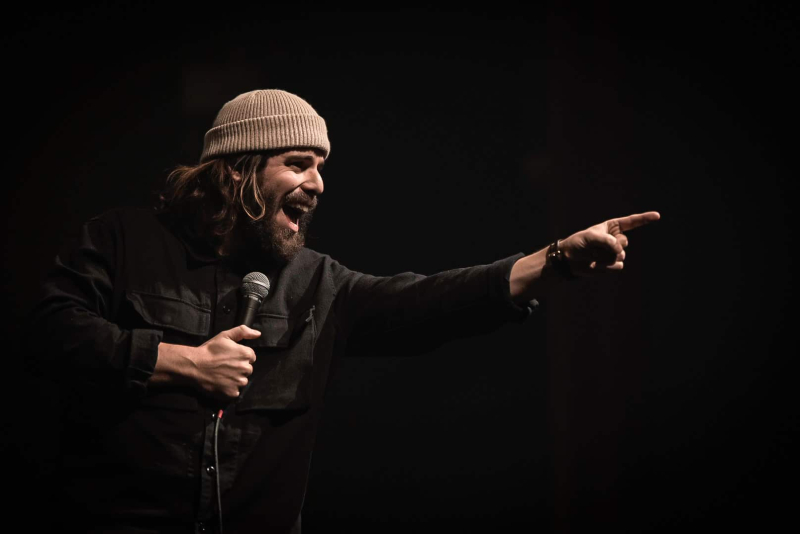 Radio-Canada invited a comedian to treat 400 French service executives to their annual RC3 event on November 9th. In the video currently circulating on social networks, we hear the comedian P-O. Forget to make fun of the executives and journalists of the Crown corporation, gathered for the occasion in a room in the new Radio-Canada tower.

P&O. Forget – a comedian from Quebec who graduated from the National School of Humor with an excellence scholarship in his pocket in 2019 – was invited to deliver a six-minute number during this event, which was in its fourth edition. It was Louise Richer, founding director general of the National School of Humor and one of the guest speakers (she gave a talk on the theme of humor hosted by France Beaudoin) who suggested to the organizers the name of P&O. Forget as guest comedian.

“They wanted to have the perspective of a young person in the labor market, explained the comedian to the Journal. What young people want, our definition of family. I wanted to talk about their industry, the recent tensions between a certain part of the population and journalists and journalism in general. I make social commentary with a somewhat oblique vision of the societal current that people expect to talk about on a daily basis.

In one of the segments of his number, the comedian is surprised at the high number of executives in the room. “I was asked today to come and do a short comedy number on work, in front of 400 Radio-Canada executives, the stamp you give to a stranger this morning to talk a little arrogantly about work. testifies to an alarming disconnect from the value of work. I was wondering where are the people, why is there a labor shortage? And just last week, I learned that there were 400 executives at Radio-Canada. That's a lot,” he laughs.

P&O. Forget prefers not to disclose the fee he received for this mandate, but qualifies it as reasonable “considering that it's a first issue and you can look hollow in front of all these beautiful people.”

He claims to have had carte blanche as to the content of his number. He therefore wrote a text adapted specifically for his audience made up of Radio-Canada executives. “We needed a custom-written number and not everyone can do it,” he continues. I have an oblique, sharp humor with little hints of very unifying arrogance.”

The comedian said he was not specifically impressed by the fact of performing in front of executives, but still felt like a hair in the soup in a day of conferences delivered by “distinguished guests”. p>

“They were ultra welcoming and laughed at my jokes, even the most scathing ones, added the comedian who will be performing at the Cabaret du Lion d’Or on January 19. There were good reactions in the room, I was really pleasantly surprised at their sense of self-mockery. I received compliments from people after my number, including the CEO of Radio-Canada, which always makes me very uncomfortable. If I could tour the most powerful industries in Quebec in culture for the roaster, it would be a little dream!”

Radio-Canada considers this event comparable to any corporate activity in companies or large organizations.

“As is done in many companies around the world, we offer our executives, on an ad hoc basis, an opportunity to meet and reflect on topics related to their role as managers, replied Marc Pichette by email. , senior director of promotion and public relations at Radio-Canada. We invite speakers and guests from all walks of life who come to share their vision and their own experience, so as to have a range of best practices. »

Hiring a comedian s is part of this activity, although it is not systematic.

« We asked him (at P-O. Forget) to stick to the theme of the day-conference , namely the transfer of work, but he effectively had carte blanche on the content of his number, “added the first director.

Radio-Canada does not want to disclose the fee having been offered to the comedian nor the budget of this event, because it is about confidential information answers the spokesperson.