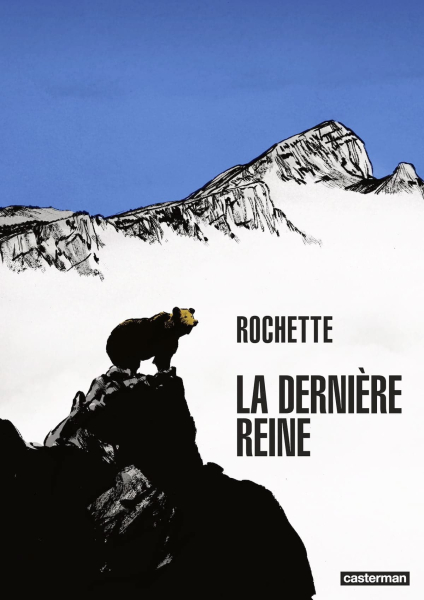 In this period of unbridled consumerism during the holiday season when the season of hunting for gift ideas invariably leads us to the eternal question “what to give this year?” », why not slip under the comic book tree? Here are some suggestions as so many ways to show your love to the lucky recipients.

The Last Queen is first and foremost a dazzling fable about beauty. The one that capsizes hearts. The one that man destroys in the sacrosanct name of progress. A broken face from the First World War, Édouard Roux meets Jeanne Sauvage, an animal sculptor who makes faces for the disfigured at the front.

In exchange for a new Dionysian face, Edouard introduces him to the majestic Vercors plateau, as well as a secret cave revealing the last queen, the bear he killed as a child. Jeanne finds there the inspiration that will lead to the realization of her masterpiece.

Author Jean-Luc Rochette, whose career was launched with Le Transperceneige, gives us the impression of playing his all out with this masterful album. Undeniably topical due to the many themes addressed, The Last Queenis a class apart. That of a lifetime's work. “The creation took place in a fairly fluid way, I had the impression of discovering a story already written”, he says with his fingertips on his keyboard.

What What is striking in this story is the presence of a free, strong, dense central female character, who falls in love with a man not for his intelligence, but for his beauty, which she has remodeled herself.&nbsp ;

“Indeed, she is attracted to the beauty and power of this man's body, and this attraction will turn between them into an absolute love, a love that makes life worth living. I am sometimes criticized for being a virile artist. I wanted to create an exemplary female character, totally free in her sexual and artistic choices, with a form of sanctity. »

Another theme addressed which finds an echo in the news: man evading the equation of the natural chain, as a destructive element. “The man outside of nature deserves to disappear. He will disappear by his own fault, the 'ecologists' and their miserable electric cars and other pitiful gadgets will do nothing about it…”

Although furiously dark and heartbreaking, this new chief -d'oeuvre reconciles us with a great truth: love and beauty triumph over everything. Always.

The map and the territory

< p>Winner of the Prix Goncourt 2010, The map and the territoryby the French novelist Michel Houellebecq is the subject of an astonishing adaptation in comic strip by Louis Paillard, an architect by profession who signs here his first career album. In a magnificent case in Italian format, the adaptation, faithful to the source material, is nevertheless of a striking graphic inventiveness. The ingenious cutting and the proposed narrative architecture energize the reading. Addressing different themes, including art, money, death, relationship to the father and creation, this reading quickly becomes impossible to put down.

You don't know what to give to superhero lovers who seem to have read everything? Never mind, the doctoral student in French studies from the University of Sherbrooke Philippe Rioux offers a captivating study exploring the history of the adoption of the genre in the 9th art in Quebec, both through the translations of American series (Ed Heritage, Ed. R.G.B., Ed. BDF) than local production (The Jam, Northguard, Merx, etc.). If only the local series presented were still available…

The extraordinary The oblique city, one of the flagship albums of the national production of 2022 which revisits the history of New France through the lens of H.P. Lovecraft, is the subject of a sublime head print, an extremely rare event in Quebec. Limited to 300 copies signed by the authors, equipped with a magnificent handmade leather case with three flaps and a lithograph, the object, of an undeniable sensuality, plunges us into an ultimate reading experience. A unique edition, in the image of the incandescent story.

Spirou and Fantasio the integral 17

Responsible for modernizing Spirou after the very successful passage of Tome and Janry, the new tandem composed of Morvan and Munuera has opted for a global approach, borrowing different elements from the rich mythology of the groom signed by the various artists who have animated it over time. Graphically tinged with manga aesthetics, the four albums that make up this integral can be devoured in one go, just like the copious opening file. A contribution as brief as it is fundamental.