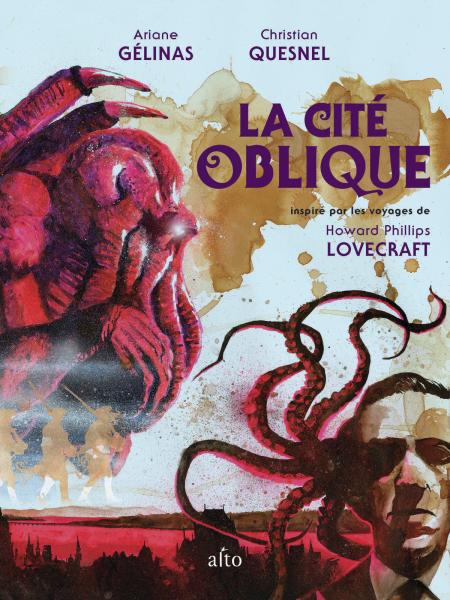 Cartoon artist Christian Quesnel, who has won many awards for his works, notably at the famous Angoulême festival, is releasing a new album on Tuesday (August 30), in collaboration with author Ariane Gélinas, combining history from New France to the fantastic universe of American author Howard Phillips Lovecraft.

The Outaouais resident worked on the boards of his new book entitled “La cité oblique” for two years based on a history of New France that Lovecraft himself wrote after three stays in Quebec in the 1930s and which was published posthumously in 1976 under the title “To Quebec and the Stars”.

“The universes created by Lovecraft leave a lot of room for evocation, and I admit that I really liked being able to mix our history with Lovecraftian mythologies. Visually even, for me, it was pure delight!” he told us in an interview.

“Addressing the fantastic, a genre that I like a lot, but that I have not treated much in the past, especially recently with my most recent comics which are documentary works, requires of me a new way of working”, added the cartoonist whose latest album is “Mégantic: Un train dans la nuit”, which illustrates the underlying story of the tragedy of July 6, 2013 in Lac-Mégantic.

For his new album, Christian Quesnel has worked with Ariane Gélinas, an author who works in the fantasy genre. “[She] has begun a complete rewrite of a new narrative. I take my hat off to him!” he launched.

“Inspired by this little-known enterprise [the writings of Lovecraft on New France], “La cité oblique” offers a hallucinated and magnificently illustrated rereading of the beginnings of colonization until the Conquest, can we read on the site of the editions Alto. Forget the official story, here is the one that has been hidden from you, narrated by one of Those-who-know.

Christian Quesnel says that “creating a narrative through images is what fascinates [him] in comics”. He describes his speech bubbles which are linked to each other to create the narrative framework of the stories as “a gesture of writing because with a succession of united images, we create a meaning, a discourse”. “Comic strips are above all a language that articulates codes of their own,” he says.

The cartoonist is now 30 years old career behind the tie and works in comics full time. To do this, he has surrounded himself with a team to take care of the management aspect of his career in order to achieve his wish for total devotion to comics.

“La cité oblique” will be released in bookstores on August 30. Official launches will take place in Quebec (August 30). Montreal (August 31) and Gatineau (September 1). In addition to the regular album, a limited edition of 300 copies has been planned for collectors. In addition, a beer brewed by La Barberie microbrewery, “L’Oblique”, will be launched specifically for the release of the album. An exhibition of plates from the book will also be held at the Galerie Montcalm, in Gatineau, starting September 1.