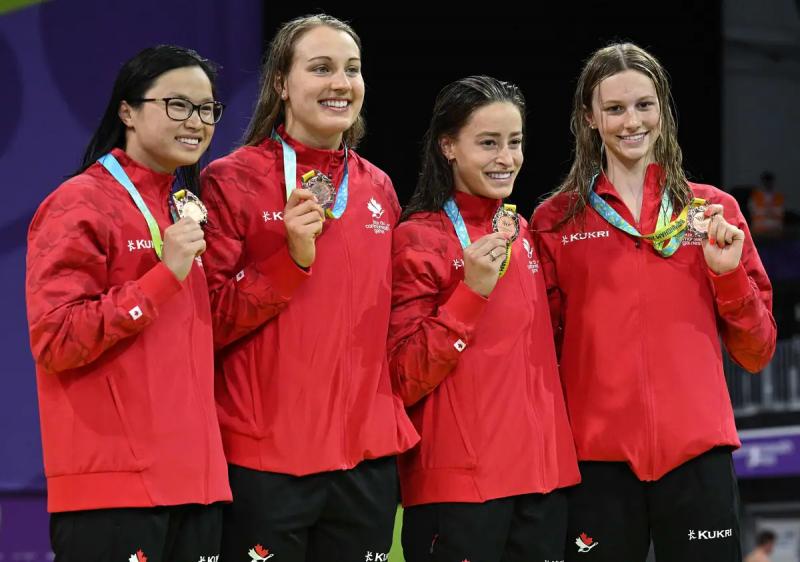 Canada's 4 x 100m freestyle relays for both men and women won bronze at the Commonwealth Games on Saturday in Birmingham, England.&nbsp ;

On the women's side, the quartet made up of Quebecer Katerine Savard, as well as Summer McIntosh, Rebecca Smith and Margaret Mac Neil, stopped the clock at 3 min 37.25 s. At that time, only the Americans and the Australians had finished the race.

In addition, a few minutes before the relay final, Mac Neil had added a medal to her collection, she who triumphed in the 100m butterfly final, thanks to a time of 56.36 s, two hundredths faster than the Australian Emma McKeon. Savard and Smith were also in the final of this event, but could not do better than fifth and eighth place, respectively.

On the men's side, the group of four relay swimmers, consisting of Joshua Liendo Edwards, Ruslan Gaziev, Finlay Knox and Javier Acevedo, collected the bronze medal with a time of 3:13.01, that is 1.89 s after the Australians, winners of the race. The English took the second step of the podium, 0.61s behind the winners.

Kelsey Mitchell did it again

For the second time in as many days, Canadian cyclist Kelsey Mitchell won the silver medal, this time in the individual sprint.

The 28-year-old clocked the best time in qualifying, before beating New Zealand's Rebecca Petch in the round of 16, as well as Welsh's Rhian Edmunds and Emma Finucane in the quarter-finals and semi-finals respectively.

The day before, Mitchell had also won silver in the team sprint, with her teammates Lauriane Genest and Sarah Orban. The latter were also present in the individual sprint, finishing third and seventh respectively in the qualifications, before each losing in the quarter-finals.

The Canadians took advantage of the second day of activities to add to their medal haul.

In weightlifting, Hannah Kaminski won the bronze medal in the women's category of 49 kg.

In Para-swimming, Quebec's Nicolas-Guy Turbide won the gold medal in the 50m freestyle, in the S13 category. He beat his nearest pursuer, Scotland's Stephen Clegg, by a hundredth of a second.

In artistic gymnastics, the Canadians, including Quebec's Laurie Denommée, won the bronze medal at the team event.