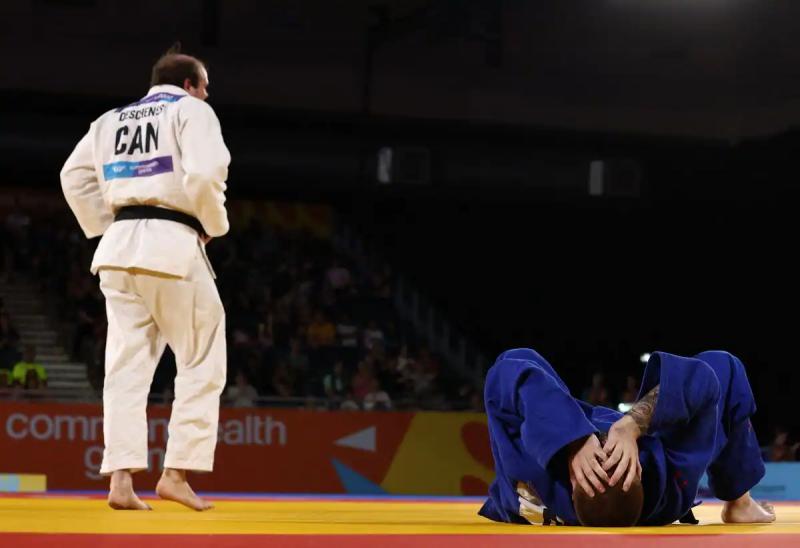 A few minutes after the all-Canadian duel in the under 100 kg final, where Shady ElNahas got the better of his teammate Kyle Reyes and thus captured the gold, Marc Deschênes seized the opportunity to win decisively, in the more than 100 kg, in less than a minute! Canada thus won three medals on Wednesday at the 2022 Commonwealth Games judo tournament in Birmingham.

Smiling, the heavyweight judoka came out of the tatami obviously happy with his day of training. work. “It was my first competition since my knee injury, I was really happy to win!” voiced Marc Deschênes.

It is the sum of two successful waza-ari by immobilizing, both times, his opponent Kody Andrews, from New Zealand, which gave the ippon to Deschênes only 58 seconds after the start of the fight. “It was not my initial strategy, but the opportunity presented itself. I grabbed it!”

After his victories, the judoka made an alligator sign, a gesture that echoed on social media. “It's my signature technique on the ground, the “gator”! I surround my opponent with my legs and I turn,” explained the 29-year-old athlete enthusiastically.

Two Canadians in the final in the under 100 kg category

Shady ElNahas and Kyle Reyes got off to a perfect start to the tournament, which saw them battle it out for gold in the Under 100kg category. The tactical duel of the two left-handers was finally won by ElNahas.

“It's a disadvantage to fight against someone who knows us so well, it's not possible to surprise him”, explained the gold medalist.

“I had a few good hand positions, but I should have attacked faster, before he got rid of it”, has as for Kyle Reyes explained to him.

Fighting without a coach, the two Canadians were unable to take advantage of the valuable recommendations of Antoine Valois-Fortier during the fight. “My brother Mohab [ElNahas] was in the stands. He knows my judo well and he was there for me. His advice allowed me to adapt!” revealed Shady ElNahas.

Earlier, in the bronze final in the under 78 kg category, Coralie Godbout lost against the Scottish Rachel Tytler and thus took fifth place.