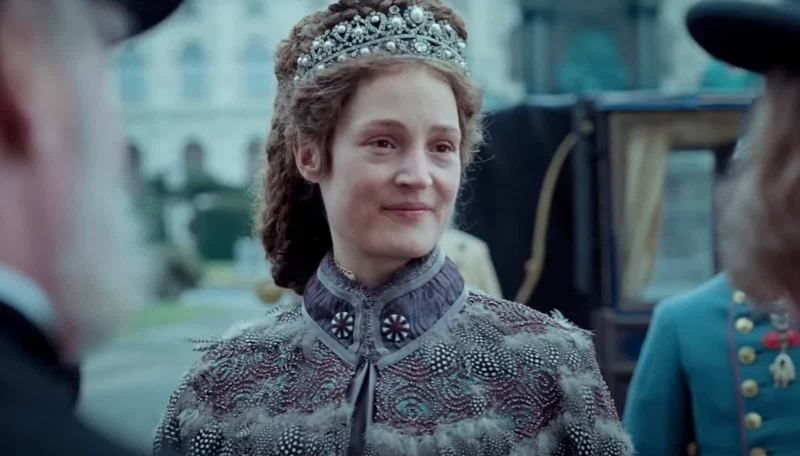 The extraordinary Vicky Krieps lends her features to an anachronistic version of Sissi, the Empress of Austria in this overly measured feature film.

Elisabeth, Empress of Austria (Vicky Krieps, noticed in the excellent “The hidden thread” by Paul Thomas Anderson) has just celebrated her 40th birthday. Since we are in 1877, women of this age are old, just good for scrapping. Elisabeth is therefore aware that her beauty, famous throughout Europe, will irremediably wither, thus depriving her of all utility and therefore of all identity.

Far from being an examination of a woman's vanity at the end of the 19th century, “Corsage” is a fierce critique of the dictatorship of youth exerted – historically and still today – on all members of the female sex. But there is more. Because the one who is nicknamed Sissi goes on a tour of Europe during which she sees former lovers again and takes a particularly hard look at her lack of political role, the shackles of the monarchy and propriety as well as on the place women in society.

Director Marie Kreutzer's strong, even rigid staging perfectly suits the subject, constantly sending the Empress back to the golden cage of which she is a prisoner and of which she has itself contributed to forging the bars. With its anachronisms, “Corsage” could bring to mind Sofia Coppola's “Marie-Antoinette” or even, more recently, the series “The Great” with Elle Fanning in the role of Catherine of Russia. But where the two works present their sovereigns as contemporary heroines, the scenario of the filmmaker plays the historical card of gravity, seriousness and skilfully mixes the true with the false in order to deliver Elizabeth's internal and external battles to us. /p>

We regret, especially in view of “The Great”, voluntarily outrageous, this very calm and measured “Bodice”.